Power of Empathy: 3 Ways Empathy Can Improve Your Life. Does it ever feel like people are all self-absorbed jerks? 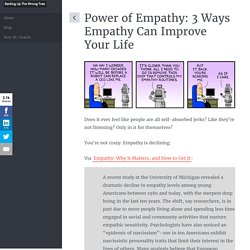 How To Get People To Like You: 7 Ways From An FBI Behavior Expert. Before we commence with the festivities, I wanted to thank everyone for helping my first book become a Wall Street Journal bestseller. 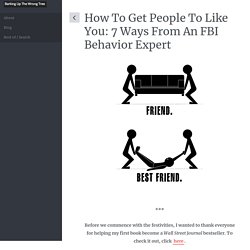 How To Improve Self-Esteem: A New Secret From Research. It seems we all want to know how to improve self-esteem these days. 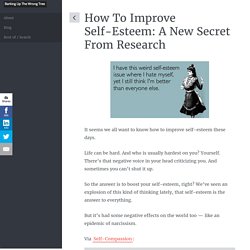 Life can be hard. And who is usually hardest on you? Yourself. There’s that negative voice in your head criticizing you. Be More Successful: New Harvard Research Reveals A Fun Way To Do It. We all want to be more successful. 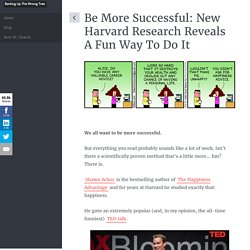 But everything you read probably sounds like a lot of work. Isn’t there a scientifically proven method that’s a little more… fun? There is. Shawn Achor is the bestselling author of The Happiness Advantage and for years at Harvard he studied exactly that: happiness. He gave an extremely popular (and, in my opinion, the all-time funniest) TED talk. And his ideas even attracted the attention of Oprah Winfrey, who filmed an interview with him.

How To Deal With A Narcissist: 5 Secrets Backed By Research. You must be tired of them. 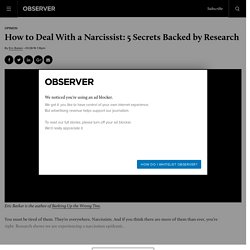 They’re everywhere. Narcissists. THE TYRANNY OF TOXIC MANAGERS: AN EMOTIONAL INTELLIGENCE APPROACH TO DEALING WITH DIFFICULT PERSONALITIES. Toxic managers are a fact of life. 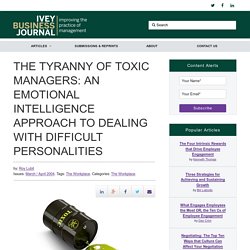 Some managers are toxic most of the time; most managers are toxic some of the time. Knowing how to deal with people who are rigid, aggressive, self-centered or exhibit other types of dysfunctional behaviour can improve your own health and that of others in the workplace. This author describes the mechanisms for coping. Skin Deep® Cosmetics Database. Vaginal 'detox pearls': the latest in our toxic obsession with disinfection. Western society is completely, fanatically obsessed with cleanliness. 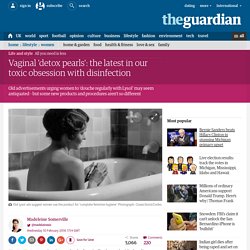 Most homes today are disinfected with a rigour that would put hospitals of yesteryear to shame, and we spend immense amounts of time and money to do so. Americans spent $4.7bn on household cleaners in 2012 and a further $1.9bn on cleaning products like brooms and mops. The average Briton devotes nearly five full hours a week to cleaning their home. We’re so clean, in fact, that our propensity for bleach and antibacterial products has resulted in a spate of new, drug-resistant super bacteria – so we can now devote our time and money to devising methods of cleaning them, too. 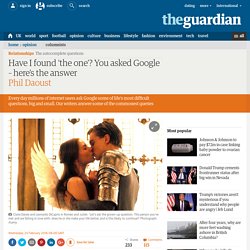 That’s an easy one. No. No you haven’t, no you can’t, no you won’t. You haven’t found “the one” because there is no “one” to be found, by you or anyone else. The idea that there is just one person in the world who can effortlessly bring you to the summit of emotional, sexual and spiritual fulfilment, then keep you there, happily ever after – it’s laughable, just like the idea of you being “the one” for someone else. In defence of pretentiousness. Pretentiousness is always someone else’s crime. 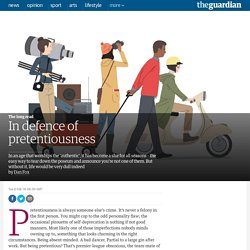 It’s never a felony in the first person. You might cop to the odd personality flaw; the occasional pirouette of self-deprecation is nothing if not good manners. Most likely one of those imperfections nobody minds owning up to, something that looks charming in the right circumstances. Being absent-minded. Career advice. Every week, sometimes every day, someone writes to me asking for advice about the career they should take. 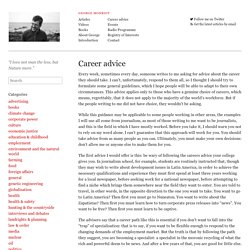 I can’t, unfortunately, respond to them all, so I thought I should try to formulate some general guidelines, which I hope people will be able to adapt to their own circumstances. This advice applies only to those who have a genuine choice of careers, which means, regrettably, that it does not apply to the majority of the world’s workforce. But if the people writing to me did not have choice, they wouldn’t be asking. While this guidance may be applicable to some people working in other areas, the examples I will use all come from journalism, as most of those writing to me want to be journalists, and this is the field in which I have mostly worked.

Before you take it, I should warn you not to rely on my word alone. The first advice I would offer is this: be wary of following the careers advice your college gives you. This career path, in other words, is counter-educational. What if I fail? You asked Google – here’s the answer. We are all failures. Every one of us. That’s not always how it looks, of course.

Other people seem so successful. Their own PR machines paint a positive picture. They are perpetually “excited” on Twitter about their new project. Seen from the outside, our friends always seem to be earning more money than us. The person you really need to marry: Tracy McMillan at TEDxOlympicBlvdWomen. Ask a Hostage Negotiator: What's the Best Way to Get a Raise? The question that most people ask themselves as they walk into their boss's office to negotiate their salaries is likely some variant of "What am I going to say? " But according to hostage negotiator Chris Voss, that might be the least important thing to keep in mind when negotiating. Voss, now an adjunct professor at Georgetown University's McDonough School of Business, spent 24 years at the FBI. It was as an FBI agent that he started to get interested in hostage negotiations.

Why Recent Graduates Don't Negotiate. Graduation season—replete with lengthy ceremonies and their (sleep-inducing) commencement speakers—is in full swing. Across the country, recent grads have traded in their anxiety about getting their diplomas on time for new kind of stress: finding employment. And for the lucky ones who actually land a good job, new data suggests they’ll probably settle for far less money than they’re worth. A recent study by the online financial resource NerdWallet, in conjunction with Looksharp, a job-search tool, shows that fresh-out-of-college students tend to become quite shy when negotiating their first salaries. The survey—which reflects responses from 8,000 recent grads and 700 employers—was conducted over a three-year period starting in 2012.

Bring back self-defence classes for women – it’s the feminist thing to do. What woman didn’t feel like punching the air this week when they read about the female kickboxer who rendered a sex attacker unconscious by placing his head in a scissor-grip with her legs after having reportedly told him: “Go fuck yourself”? To quote the song from Chicago, Cell Block Tango: he had it coming. The woman, who has chosen to remain anonymous, was awarded £500 for her bravery by the judge in the case, and, while grateful for the gesture, she was quick to point out that “my motivation was just survival at the time”. As someone who has survived a similar attack, I empathise. Be mindful of mindfulness: drug-free doesn't mean side-effect free.

My morning pills consist of a multivitamin which I’m pretty sure is useless except for making nutrient-rich urine, an antidepressant which can have the unfortunate side effect of making me happy, and a mood stabiliser whose side-effects include an alarming number with the word “necrosis” in them. I swallow them every day, possibly less diligently than I should, and I guess I’m doing OK.

More than anything, I admire decisive women. The Theory Of Nothing: Why Lack Of Curiosity Leads To Mediocrity. In the film The Theory of Everything, the life of the monumentally important physicist Stephen Hawking was portrayed. 23 Things Girls Deserve From The Guy They’re With. I Took Note Of Every Mean Thing I Said To My Boyfriend For A Month, And This Is What I Found. 14 Things It’s Time You Forgave Yourself For. 1. The big things that you changed your mind about. 18 Struggles Of Having An Outgoing Personality But Actually Being Shy And Introverted. This… this is my soul song, people. 15 Things Ambitious Girls Do A Little Bit Differently When They’re Dating. 5 Things That Will Numb Your Life. Or Am I? 10 Experiences That Signal You Are in Love. What we can learn about relationships from politically divided couples. Dating a Member of a Different Political Party.

Bridging the Divide: How to Date Across Political Parties. 7 ways to practice emotional first aid. Remaining childless can be wise and meaningful. The pope should know. Setting the Rules of an Open Relationship. 10 Reasons You Don’t Listen. Ten Important Questions You Should Ask a Potential Partner. Why Can't I Let Love In? Ten Important Questions You Should Ask a Potential Partner. 8 Rays of Hope for Struggling Relationships. Subtext and stale biscuits say a lot about your relationship. 9 things I wish people understood about anxiety. 9 secrets I've uncovered about depression. Elizabeth Gilbert: Success, failure and the drive to keep creating. Why you’re (probably) not a great communicator.

What It Means To Be A Badass Woman. To The Girl Who’s Afraid To Love Again. Compatibility and Chemistry in Relationships. Compatibility and Chemistry in Relationships. Communication & Relationship Advice For Passive Aggressive People. Mistakes That Slow Your Metabolism And Calorie Burn. Becoming Emotionally Self-Reliant : zen habits. Being Needy Is a Relationship Problem With a Cure. Are You An Emotional Vampire? Julian Treasure: How to speak so that people want to listen. Ten easy steps to happier living.

The Stone Links: Unfit for Modernity? The 'Busy' Trap. Joy-of-being-sold.jpg (350×273) NewsToday. Against Chairs. Being single and being lonely are not the same thing: An excerpt from Michael Cobb’s Single: Arguments for the Uncoupled. The 9 Stages Of A Collegiate Bromance. 30 Things to Stop Doing to Yourself. This column will change your life: don't say 'I can't' if you can say 'I don't'

Steve Jobs Speech at Stanford, 2005. Larry Smith: Why you will fail to have a great career. The 10 Most Hilariously Stupid Criticisms People Make About 20 Somethings. How to Find Your Purpose and Do What You Love. Post, Emily. 1922. Etiquette in Society, in Business, in Politics and at Home. 1. What Is Best Society? Post, Emily. 1922. Etiquette. Susan Cain: The power of introverts. Brene Brown: The power of vulnerability. The Rise of the New Groupthink.

This column will change your life: why confidence is overrated. The Greatest Speech Ever Made. The Fifth Element - Researching War. I have ADHD and I AM... Does having a high IQ makes you less creative? The underground world of neuroenhancing drugs. ADHD medication changes my boyfriend's personality. Sorry, but being a mother is not the most important job in the world. I am silenced by the tyranny of impending motherhood. The In-Process, Unofficial Guide to Being a Woman. Mais pourquoi la coupe menstruelle n’est pas vendue en supermarché ?