Series - David LaChapelle. Typography (Part Three). - Journey from Concept to Creation. There is far more to the creative process than learning how to use software and configure hardware. 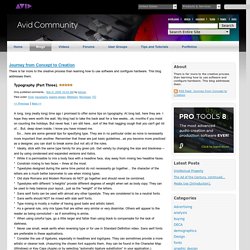 This blog addresses them. << Previous | Next >> A long, long (really long) time ago I promised to offer some tips on typography. At long last, here they are. I hope they were worth the wait. So....here are some general tips for specifying type. . * Ideally, stick with the same type family for any given job. Alright... that ends the series on Typography. After developing his artistic abilities from an early age, Robert Davis (Adman) started his advertising career as a graphic artist for a commercial printing company while in 10th grade.

Typography (Part Two). - Journey from Concept to Creation. << Previous | Next >> The reason for proper type specification is simple -- select the typestyle that will best deliver your message. 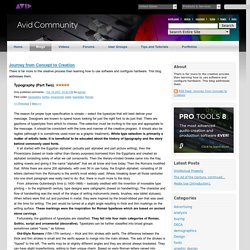 Designers are known to spend hours looking for just the right font to do just that. There are gazillons of typestyles from which to choose. The selection must be inviting to the eye and appropriate to the message. It should be consistent with the tone and manner of the creative program. It all started with the Egyptian alphabet (actually part alphabet and part picture writing), then the Phoenicians (based on trade rather than literary purposes) borrowed from the Egyptians and created an alphabet consisting solely of what we call consonants. Fortunately, the gazillions of typestyles are classified. Modern Romans (late 18th century) -- thick and thin strokes with serifs, but the difference between them is more pronounced.

Transitional Romans (mid 18 century) -- Some of the old style characteristics, some of the modern. Etc. [Edit] Subtitles - font and size? Subtitle Fonts & Sizes - Part 338. If you’re starting the process of adding subtitles to your film you’ll need to take into consideration font styles, spacing, font color and font size. 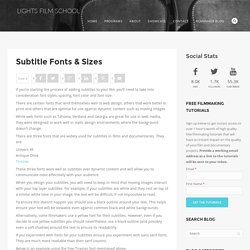 There are certain fonts that lend themselves well to web design, others that work better in print and others that are optimal for use against dynamic content such as moving images. While web fonts such as Tahoma, Verdana and Georgia are great for use in web media, they were designed to work well in static design environments where the background doesn’t change. 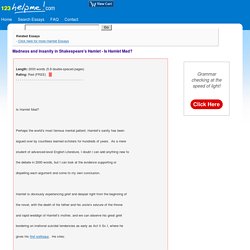 Perhaps the world's most famous mental patient, Hamlet's sanity has been argued over by countless learned scholars for hundreds of years. As a mere student of advanced-level English Literature, I doubt I can add anything new to. Gallery: Fairy tales as you’ve never seen them before. Russian artist Uldus (TED Talk: Wry photos that turn stereotypes upside down) makes fantastical and intricate photographic portraits of people — as they imagine themselves to be. 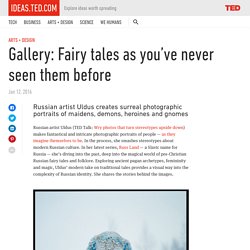 In the process, she smashes stereotypes about modern Russian culture. In her latest series, Russ Land — a Slavic name for Russia — she’s diving into the past, deep into the magical world of pre-Christian Russian fairy tales and folklore. Exploring ancient pagan archetypes, femininity and magic, Uldus’ modern take on traditional tales provides a visual way into the complexity of Russian identity. She shares the stories behind the images. Triglava (Three-headed Goddess) 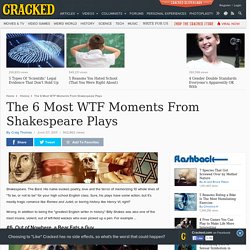 The Bard. His name evokes poetry, love and the terror of memorizing 10 whole lines of "To be, or not to be" for your high school English class. Sure, his plays have some action, but it's mostly tragic romance like Romeo and Juliet, or boring history like Henry VI, right? Wrong. In addition to being the "greatest English writer in history," Billy Shakes was also one of the most insane, violent, out of left-field wackos who ever picked up a pen. Hamlet's Descent into "Madness" by Preston Evans on Prezi. Top 10: Shakespeare scenes. Actors Elizabeth Taylor and Richard Burton kneel in a scene from the film The Taming of the Shrew, 1973. 'To be or not to be'' - these are probably the most famous words uttered in literature. 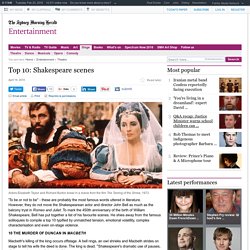 However, they do not move the Shakespearean actor and director John Bell as much as the balcony tryst in Romeo and Juliet. To mark the 450th anniversary of the birth of William Shakespeare, Bell has put together a list of his favourite scenes. He shies away from the famous soliloquies to compile a top 10 typified by unmatched tension, emotional volatility, complex characterisation and even on-stage violence. Macbeth's killing of the king occurs offstage. Advertisement Taking an asp from a clown's basket of figs and pressing it to her breast, the Queen of Egypt shows what it takes to die with dignity and style, triumphant over her Roman captors. Bell watched a young Maggie Smith play Desdemona opposite Sir Laurence Olivier's Othello in London's Old Vic Theatre in 1964, not once but four times. The 10 best Shakespeare characters.