How To Get People To Like You: 7 Ways From An FBI Behavior Expert 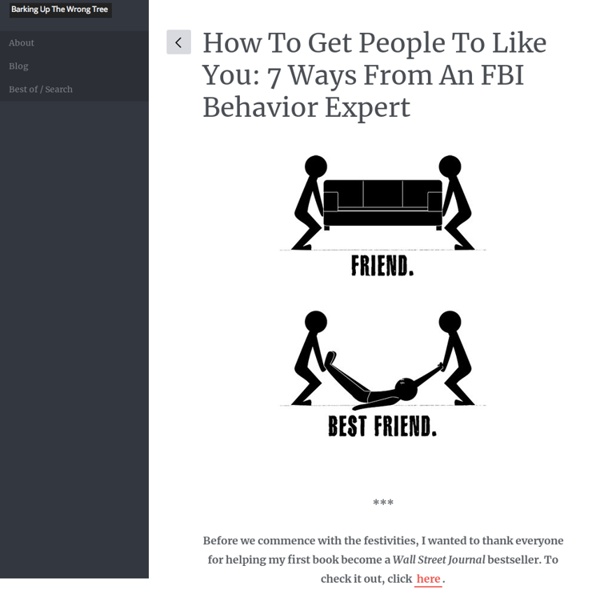 Before we commence with the festivities, I wanted to thank everyone for helping my first book become a Wall Street Journal bestseller. To check it out, click here. Meeting new people can be awkward. What should you say? How can you make a good impression? How do you keep a conversation going? Research shows relationships are vital to happiness and networking is the key to getting jobs and building a fulfilling career. But what’s the best way to build rapport and create trust? Robin Dreeke can. Robin was head of the FBI’s Behavioral Analysis Program and has studied interpersonal relations for over 27 years. Robin is the author of the excellent book, It’s Not All About “Me”: The Top Ten Techniques for Building Quick Rapport with Anyone. I gave him a call to get some answers. You’re going to learn: And a lot more. 1) The Most Important Thing To Do With Anyone You Meet Robin’s #1 piece of advice: “Seek someone else’s thoughts and opinions without judging them.” Ask questions. Here’s Robin: Sum Up

Jedi Mind Tricks: 17 Lesser Known Ways to Persuade People Want to know how to persuade people online and get what you want? The power of influence is usually all that separates the successful from everyone else. These are some tactics, discovered through psychological research, that you have probably not yet heard about, but have the potential to increase your persuasive abilities. I’m not going to cover reciprocity, scarcity or social proof and all those widely known persuasion principles. You already know all about those (in case you don’t, stop everything and read this book by Cialdini). Related: How Nike’s Making Persuasive Product Pages

Afraid of Love: 2 Fears That Keep People Single Could you possibly be afraid of falling in love? Watch out for these telltale signs, and finally free yourself to attract a genuine, loving relationship. Fear is a funny thing. Taming the Mammoth: Why You Should Stop Caring What Other People Think We made a fancy PDF of this post for printing and offline viewing. Buy it here. Part 1: Meet Your Mammoth The first day I was in second grade, I came to school and noticed that there was a new, very pretty girl in the class—someone who hadn’t been there the previous two years. Her name was Alana and within an hour, she was everything to me. How To Make People Like You: 6 Science-Based Conversation Hacks So you want to know how to make people like you? It’s easier than you think. A while back I posted about how to master conversation skills. Here are 6 more research-backed tips:

On How to Disagree We live in a world saturated with disagreement. People are at odds about pretty much everything from when to order a taxi, go out to dinner to whether there should be a caliphate; from the kind of orbit the International Space Station should assume; the right way to cook lasagna to whether Hungary is in Eastern or Central Europe, and how long a child should be allowed to play Minecraft on a Saturday morning. While disagreement can be civilised, interesting and productive, it is much too frequently a powerful source of misery: we get enraged and bewildered; we are appalled at the views of others and feel intensely bothered by them; we feel defeated, hopeless and lonely; we agonise, rehearse the conflict alone in our heads, worry, feel guilty, get upset… Disagreement is especially pressing now, because of certain large societal forces that have been building for the last couple of centuries. 1. Politics

Why People Believe Weird Things and 8 Ways to Change Their Minds Some people believe all kinds of weird stuff including… …no, actually, for a very good psychological reason I’m not going to repeat any of it here. Let’s just say that some people believe weird stuff and leave it at that. It turns out that just one of the fascinating reasons that people accept odd ideas is that they keep getting repeated, even if only to debunk them. So, where does all this misinformation come from, why do people believe it and how can right-thinking people counter it? (The following is based on an excellent article by Professor Stephan Lewandowsky and colleagues). Love is Not Enough In 1967, John Lennon wrote a song called, “All You Need is Love.” He also beat both of his wives, abandoned one of his children, verbally abused his gay Jewish manager with homophobic and anti-semitic slurs, and once had a camera crew film him lying naked in his bed for an entire day. Thirty-five years later, Trent Reznor from Nine Inch Nails wrote a song called “Love is Not Enough.” Reznor, despite being famous for his shocking stage performances and his grotesque and disturbing videos, abstained from all drugs and alcohol, married one woman, had two children with her, and then cancelled entire albums and tours so that he could stay home and be a good husband and father. One of these two men had a clear and realistic understanding of love.

5 Ways to Stop Worrying About What Everyone Thinks of You You could spend the whole year worrying about what other people think of you, but it wouldn’t get you anywhere. “What’s wrong with wanting others to like you?” That’s what several of our course members asked me in response to one of my recent course member emails.