@mae_fbp. Love or Country: A difficult choice for women in Kuwait. 1 Both figures are derived from information taken from Table (15) Married Kuwaiti females by nationa (...) 2 Figure derived from a 30‑year average (1985–2015) based on numbers provided by the Central Statist (...) 1Upon deciding to marry a non‑national, a Kuwaiti woman is faced with multiple obstacles, which differ depending on whether she is marrying someone from the GCC, from another Arab state, a non‑Arab, or a stateless person (commonly referred to as Bedun — bidūn). 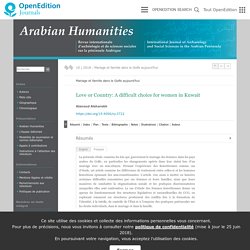 There is, however, a constant thread that runs through all of these women’s experiences. They are all unable to pass on their citizenship to their children, and their children do not benefit from many of the state‑funded welfare privileges that other citizens enjoy, especially in terms of scholarships, employment opportunities and full health services. 3 Grewal & Kaplan, 1994, p. 17. 4 Semi‑annual State of the Population Report, 2016. GCC rift ‘pained the late Emir the most,’ says Kuwaiti scholar Alanoud Alsharekh. Discussion on Gender based violence (GBV) and the launch of the Safecity application. Abolish Article 153: Symposium Women And Social Change / Part 2.

Abolish Article 153: Symposium Women And Social Change / Part 1. Abolish 153 Hala Kuwait Interview. Penal Law Informative Abolish Article 153. From Kuwait to America, Gender-Based Killings Considered Less Than Murder. In the rationale for its travel ban, President Trump’s administration cites instances of “honor killings” at the hands of immigrants from the Muslim-majority countries of Iran, Libya, Somalia, Syria, and Yemen among its reasons for barring people with these nationalities from entering the United States. 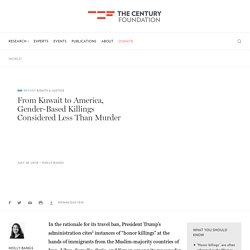 It is true that according to the penal codes of many countries in the Middle East and North Africa (MENA) region, from Article 375 in Libya to Article 630 in Iran, should a man kill his wife, mother, sister, or daughter after catching any of them engaging in a sexual act outside of marriage, his actions are legally codified as lesser crimes than murder. Some researchers were puzzled by the fact that such homicides also occur in the United States, pointing to roughly twenty-five documented honor killings each year occurring in the country.

The perpetrators of these domestic murders that have been labeled as honor killings have a key common trait: they are immigrants from the MENA region. Women in Arab countries find themselves torn between opportunity and tradition. Arab women, long relegated to the private sphere by law and social custom, are gaining new access to public life. 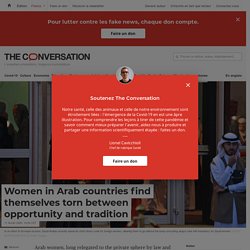 All countries of the Arab Gulf now have workforce “nationalization policies” that aim to reduce dependency on migrant labor by getting more women into the workforce. Saudi Arabia set a goal of 30% female labor participation by 2030. Submission to the UN special rapporteur on violence against women, its causes and consequences regarding COVID-19 and the increase of domestic violence against women.

Human Rights Watch welcomes the opportunity to present this submission to the special rapporteur on violence against women, its causes and consequences regarding Covid-19 and the increase of domestic and gender-based violence globally. 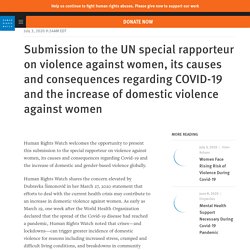 Human Rights Watch shares the concern elevated by Dubravka Šimonović in her March 27, 2020 statement that efforts to deal with the current health crisis may contribute to an increase in domestic violence against women. In addition to what is provided below, Human Rights Watch has also collected data from many countries to answer the questions posed by the special rapporteur and would welcome sharing that information informally.

Disempowerment Of Women Is Systematic: Dr Alanoud Al Sharekh. “The most frustrating aspect of working in a conservative country like Kuwait is that people equate traditions with religion and project that on gender roles in a manner that is convenient to them,” says Dr. 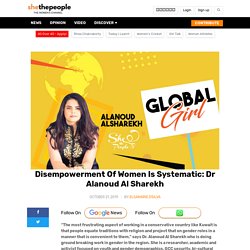 Alanoud Al Sharekh who is doing ground breaking work in gender in the region. She is a researcher, academic and activist focused on youth and gender demographics, GCC security, bi-cultural trends and her special area of interest: Arab Feminist Theory, and is currently a Research Associate the Chatham House and the Arab Gulf Institute in Washington. How would you describe yourself? I had a conversation with a friend who is also involved in women’s issues who called me a self-declared feminist. I said I’m a self-evident feminist; it’s inevitable when you’re aware of your place in an arbitrary socio-political hierarchy based on “gender”. Kuwait's National Assembly passes domestic violence bill. Kuwait has passed its first law designed to specifically target domestic violence. 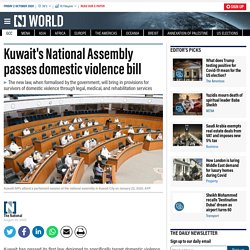 The legislation, drafted by the Women and Family Committee, will “set the minimum standard and legal protection procedures for victims of domestic violence, in a way that maintains the family unity without threatening its stability in the society”, state news agency Kuna reported. The committee, which includes Kuwait's only elected female representative, Safa Al Hashem, presented the bill in parliament on Wednesday. Thirty-eight MPs voted for the bill, one MP abstained and another voted against. 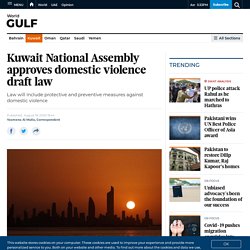 It will take about six months for the government to formalise the law. Kuwait: Pregnant woman shot dead by brother inside hospital ICU. Kuwait City: A 35-year-old pregnant Kuwaiti woman was shot dead by her brother on Wednesday due to a marriage dispute. 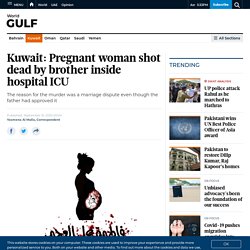 Although the father of Fatima Al Ajmi and other brother had approved the marriage, one of her siblings was against it as her husband was not from the same tribe. “This was an individual act that was taken out of maliciousness and a medieval mentality. This act came out of hate for his sister and his personal opinion that she has embarrassed the family,” Hesham Al Mulla, the lawyer handling Al Ajmi’s case, told Gulf News. Al Ajmi suffered several gun shots - the first two were fired by her brother inside her house in the presence of her one-year-old child.

Hearing the gun shots, Al Ajmi’s husband rushed her to hospital. Since Al Ajmi got married two years ago, she has was threatened several times by her brother. The murder has sparked uproar on social media, with many people demanding justice. History of honour killings “What defines honour? Kuwait: Brighter Future Beckons for Domestic Violence Sufferers. Domestic violence has always been a complex issue in Kuwaiti culture, often tied to norms and beliefs relating to family structures and concepts of guardianship, honour and discipline. 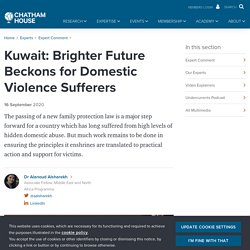 As with other forms of abuse within the family, it is also considered a private matter and therefore not addressed publicly. Despite a lack of up to date figures, the problem is widespread, affecting 53.1% of women in Kuwait according to a 2018 study. But Kuwait’s last submission to the Committee on the Elimination of Discrimination against Women (CEDAW) showed only 447 domestic violence cases had been through the court system in 2016, and only 76 of those resulted in a conviction.

Given the known difficulties of reporting abuse and getting a case to court, it is not a stretch to conclude the actual figures of abused women is much higher than this figure given by the Ministry of Justice. The path to getting this law put to a vote has been a long and winding one. Abolish 153: Tackling Domestic Violence in Kuwait – Arab Gulf States Institute in Washington. Abolish 153 is an awareness campaign started by a small group of women in Kuwait to eradicate domestic violence in the country. 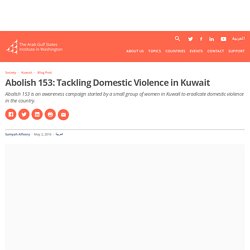 The initiative’s main target is Article 153 of Kuwait’s penal code, which stipulates that a man who murders his wife (or daughter, sister, or mother) after catching her in an adulterous act can receive a maximum punishment of three years in prison and/or a fine of up to 225 Kuwaiti Dinars (about $748). The group behind Abolish 153 has held several cultural and educational events to mobilize against Article 153 and gender violence, and to highlight women’s role in society. AGSIW spoke with Alanoud AlSharekh, co-founder of the initiative, to discuss the campaign’s founding, philosophy, and events, as well as its future. AGSIW: Tell us about the initiative. Kuwait's Abolish Article 153 campaign awarded in London. The UK-based London Arabia Organisation has honored the Abolish Article 153 campaign – represented at the event by Sheikha Al-Nafisi and Sundus Hussein – with the Campaign for Social Change Award at the Arab Women of the Year Awards for 2019 in recognition of the prominent and humanitarian role of this campaign in raising awareness of ending violence against women in Kuwait and the Arab world.

Give Kuwaiti Women the Rights They Deserve! - The Media Line. Al-Qabas, Kuwait, September 4 Two weeks ago I posted a tweet that quickly went viral. In it, I demanded that Kuwaiti women be allowed to choose their own life partner while preserving the right, currently granted only to men, to reside in Kuwait. Truth be told, I didn’t expect the tweet to become so prolific. This made me happy but also sad. Happy, because it received the attention it deserved. Abolish 153 campaign seeks to rid Kuwait of archaic law.

Kuwait City: A campaign is gaining steam in Kuwait to abolish an outdated ‘honour-killing law’ which charges men who kill their female family members who engage in sex outside of marriage to get off with only a misdemeanour crime punishable by a three-year prison sentence (or less) and/or a maximum fine of 225 Kuwaiti dinars ($744, Dh2,840). The contentious Article 153 was instituted 57 years ago and actually predates Kuwait’s independence from Great Britain. Dr Alanoud Al Sharekh, a prominent rights activist from Kuwait and consultant at Ibtkar Strategic Consultancy, tells Gulf News that the law has nothing to do with Kuwaiti culture. Arab Women Struggle for Real Change - The Media Line.

Feminist movement’s efforts pay off in some countries, in others not so much Women in the Arab region have long struggled to obtain the rights due them under international law and treaties, and for greater representation in their countries’ political and social systems. There has been progress in several states but many view the changes as merely scratching the surface and designed to polish the image of governments and ruling political parties. In the past few years, several Arab countries have adopted laws to protect women and their rights, particularly in the political arena. In Lebanon, some see the presence of six female cabinet members in the new government unveiled on January 22, including Zeina Akar as defense minister and deputy prime minister, as an effort to win over angry protesters who remained in the streets for days after the announcement.

This record feminist representation sets a precedent not only for Lebanon but for the entire Arab world. You’ve Come A Long Way Baby: Women’s New Media Practices, Empowerment, and Everyday Life in Kuwait and the Middle East. Women's Activism in the Middle East (Poster) Women's rights in the Middle East V-Dem Briefing Paper on International Women's Day 2015. WOMEN’S RIGHTS IN THE MIDDLE EAST AND NORTH AFRICA. Women's Rights in the Middle East: A Longitudinal Study of Kuwait. Prevalence and health outcomes of domestic violence amongst clinical populations in Arab countries: a systematic review and meta-analysis.

Saudi Arabia announced on Friday breakthrough changes to the Kingdom’s guardianship laws, allowing all citizens over the age of 21 – male and female – to travel freely without a guardian’s approval. In Qatar, guardianship rules still limit women’s ability to travel. According to the Qatari Ministry of Interior’s website, single women under 25 years of age require a male guardian’s consent to travel outside the country. Qatari men can also apply to the courts to prohibit their wives from travelling. “Married women are entitled to travel without permission irrespective of their age. For Qatari males, the Qatari interior ministry says that “no permission is required for those who are 18 years old or more as they have reached the legal age of puberty.” Neither Bahrain nor the UAE operates guardian systems for adult female travelers.