Vaccination myths busted by science. Cheat sheet on immunisation. A recent survey found more than two thirds of us research our medications on-line. 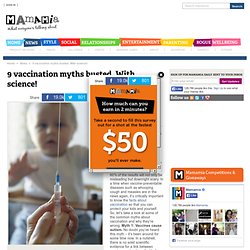 Half of us turn to “Dr Google” for diagnosis. But how do you know the information you are getting online is accurate? Basically, you don’t. In fact studies show if you search Google for “vaccination”, 60% of the results will not only be misleading but downright scary. In a time when vaccine-preventable diseases such as whooping cough and measles are in the news again, it’s critically important to know the facts about vaccination so that you can protect your kids and yourself.

Since 1998 there have been countless large and comprehensive studies looking for a link between vaccines and autism, but the evidence keeps coming up negative. Further, in August 2011, an exhaustive review of the scientific literature by the Institute of Medicine in the US concluded that overall “few health problems are caused by or clearly associated with vaccines”.

The iron lung, the machine used to keep polio patients alive. 10 flu myths : Harvard Health Publications. If you’ve ever had the flu, you know how sick you can be. 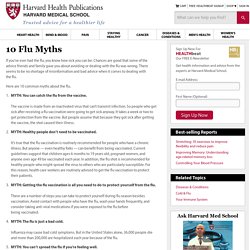 13 Flu Myths: Myths About the Flu Vaccine, Treatments, and Prevention. Vaccines: Vac-Gen/Some Misconceptions. Do Children Get Too Many Immunizations? The Answer is No. Mark Crislip, M.D. 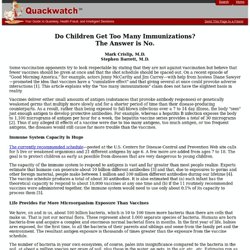 Stephen Barrett, M.D. Some vaccination opponents try to look respectable by stating that they are not against vaccination but believe that fewer vaccines should be given at once and that the shot schedule should be spaced out. Multiple immunizations weaken immune system–Myth vs. Science. If you explore the dark and myth filled back alleys of the antivaccination movement, you will find a wide variety of myths that try to convince people that vaccinating children is dangerous. 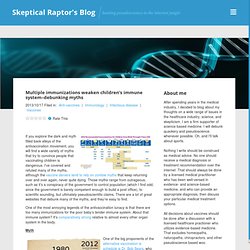 I’ve covered and refuted many of the myths, although the vaccine deniers tend to rely on zombie myths that keep returning over and over again, never quite dying. Toxic myths about vaccines. Fecal matter in vaccines? Vaccines and Formaldehyde. Concerns about safety have focused on formaldehyde in part because high concentrations of formaldehyde can damage DNA (the building block of genes) and cause cancerous changes in cells in the laboratory. 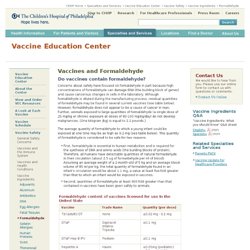 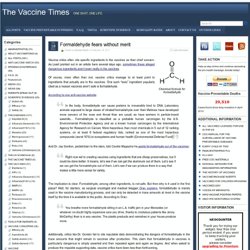 As Leart pointed out in an article here several days ago, sometimes these alleged dangerous ingredients aren’t even really in the vaccines . Of course, more often than not, vaccine critics manage to at least point to ingredients that actually are in the vaccines. One such “toxic” ingredient popularly cited as a reason vaccines aren’t safe is formaldehyde. According to one anti-vaccine website : Harpocrates Speaks: Demystifying Vaccine Ingredients - Formaldehyde. There seems to be a lot of fear and confusion surrounding many of the ingredients (PDF) that are listed as being in vaccines. 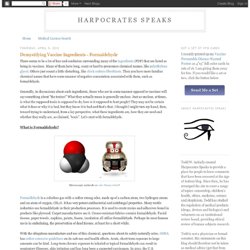 Many of them have long, scary or hard to pronounce chemical names, like polyethylene glycol . Others just sound a little disturbing, like chick embryo fibroblasts . Then you have more familiar chemical names that have some manner of negative connotation associated with them, such as formaldehyde. CFR - Code of Federal Regulations Title 21. The food additive polysorbate 80 (polyoxyethylene (20) sorbitan monooleate), which is a mixture of polyoxyethylene ethers of mixed partial oleic acid esters of sorbitol anhydrides and related compounds, may be safely used in food in accordance with the following prescribed conditions: (a) The food additive is manufactured by reacting oleic acid (usually containing associated fatty acids) with sorbitol to yield a product with a maximum acid number of 7.5 and a maximum water content of 0.5 percent, which is then reacted with ethylene oxide. 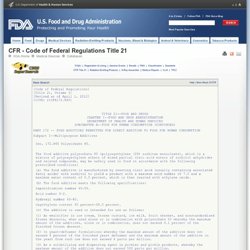 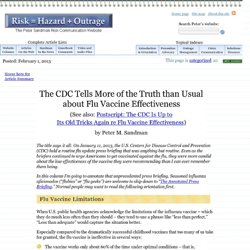 Centers for Disease Control and Prevention (CDC) held a routine flu update press briefing that was anything but routine. Even as the briefers continued to urge Americans to get vaccinated against the flu, they were more candid about the low effectiveness of the vaccine they were recommending than I can ever remember them being. Vaccine Effectiveness - National Network for Immunization Information. Do vaccines work? 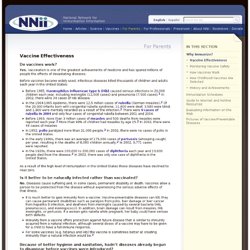 Yes. Vaccination is one of the greatest achievements of medicine and has spared millions of people the effects of devastating diseases. Before vaccines became widely used, infectious diseases killed thousands of children and adults each year in the United States: Before 1985, Haemophilus Influenzae type b (Hib) caused serious infections in 20,000 children each year, including meningitis (12,000 cases) and pneumonia (7,500 cases). In 2002, there were 34 cases of Hib disease. As a result of the high level of immunization in the United States these diseases have declined to near zero. Turning an eye on the profession, separating fact from fiction on both sides of the counter. RETRACTED: Ileal-lymphoid-nodular hyperplasia, non-specific colitis, and pervasive developmental disorder in children.

Influenza pandemic. An influenza pandemic is an epidemic of an influenza virus that spreads on a worldwide scale and infects a large proportion of the human population . In contrast to the regular seasonal epidemics of influenza, these pandemics occur irregularly, with the 1918 Spanish flu the most serious pandemic in recent history. Influenza A virus subtype H2N2. H2N2 is a subtype of the type influenzavirus A . H2N2 has mutated into various strains including the Asian flu strain (now extinct in the wild), H3N2 , and various strains found in birds . It is also suspected of causing a human pandemic in 1889. [ 1 ] [ 2 ] The geographic spreading of the 1889 Russian flu have been studied and published. [ 3 ] Russian flu [ edit ] Some believe that the 1889 - 1890 Russian flu was caused by the influenzavirus A virus subtype H2N2, but the evidence is not conclusive.

It is the earliest flu pandemic for which detailed records are available. [ 4 ] "The 1889 pandemic, known as the Russian Flu, began in Russia and spread rapidly throughout Europe. Asian flu [ edit ] The category 2 Asian flu pandemic outbreak of influenza A virus originated in China in early 1956, and lasted until 1958. Pre-existing immunity against swine-origin H1N1 influenza viruses in the general human population. World now at the start of 2009 influenza pandemic. Ladies and gentlemen, In late April, WHO announced the emergence of a novel influenza A virus. This particular H1N1 strain has not circulated previously in humans. The virus is entirely new.

The virus is contagious, spreading easily from one person to another, and from one country to another. As of today, nearly 30,000 confirmed cases have been reported in 74 countries.