Attacking Ourselves: Top Doctors Reveal Vaccines Turn Our Immune. Vaccines Did Not Save Us – 2 Centuries Of Official Statistics. Download or view this article as a .pdf file This is the data the drug industry do not want you to see. 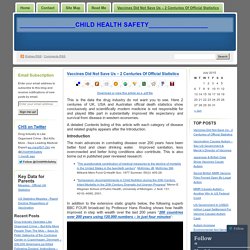 Here 2 centuries of UK, USA and Australian official death statistics show conclusively and scientifically modern medicine is not responsible for and played little part in substantially improved life expectancy and survival from disease in western economies. A detailed Contents listing of this article with each category of disease and related graphs appears after the Introduction. Introduction. Herd Immunity: Flawed Science and Mass Vaccination Failures. The oft-parroted sound bite – "we need herd immunity"- implies that if ninety five percent of the population can become "immune" to a disease via vaccination, target immunity levels will be met and diseases will either be eradicated or controlled. 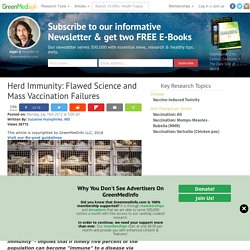 This sound bite is the most commonly pulled weapon used by the vaccinators, only second to "smallpox and polio were eradicated by vaccination. " "Herd immunity" is the trump card for the defense of vaccination on TV, Internet, medical journals and newspapers as to why we should be vaccinated over and over throughout our lives, with an ever-increasing number of vaccines. Paul Offit smiled and PLAYED THE CARD while peddling his book on the comedy central channel as Steven Colbert jokingly said, "if the vaccines work so good for you, why do I need one?

" Dr. Mark Segal PULLED IT on fox news as Mary Holland, JD eloquently described the issue of vaccine injury and loss of legal recourse in an era of forced and mandated vaccines. Continue to Page 2. Healthy People 2020 and the Decade of Vaccines. Originally published on DrTenpenny.com. 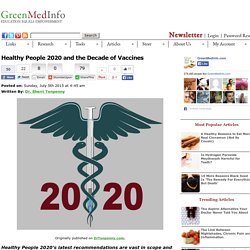 Healthy People 2020's latest recommendations are vast in scope and include government intrusion into nearly ever conceivable area of personal life and health, including a National Vaccine Plan. While it appears that the recent measles hysteria pushed a button that rocketed nearly all 50 states to introduce vaccine bills simultaneously, calling to restrict and/or remove vaccine exemptions for children, the plan has actually been evolving for a long time. The flurry of legislative actions are rooted in the Healthy People guidelines which began 35 years ago. In 1976, Congress created The Office of Disease Prevention and Health Promotion (ODPHP) to coordinate disease prevention and health promotion efforts across the United States.

Three years later, Surgeon General Julius B Richmond chronicled the state of health in America, then defined five quantitative goals for public health. The goals were meant to be national in scope. Continue to Page 2. Of Course I'm Anti-Vaccine... I Have a Brain. Mercola also said: In a June 2010 report in the Journal of General Internal Medicine, study authors said that in looking over records4 that spanned from 1976 to 2006 (the most recent year available) they found that, of 62 million death certificates, almost a quarter-million deaths were coded as having occurred in a hospital setting due to medication errors. 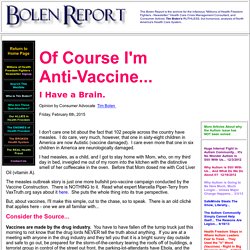 An estimated 450,000 preventable medication-related adverse events occur in the U.S. every year. The costs of adverse drug reactions5 to society are more than $136 billion annually -- greater than the total cost of cardiovascular or diabetic care. Adverse drug reactions cause injuries or death in one of five hospital patients. The reason there are so many adverse drug events in the U.S.6 is that so many drugs are used and prescribed – and many patients receive multiple prescriptions at varying strengths, some of which may counteract each other or cause more severe reactions when combined. More: Grant funds? Stay tuned. National Vaccine Information Center - Your Health. Your Family. Your Choice. 11 Reasons Why Flu Shots Are More Dangerous Than The Flu Itself. Natural News Blogs Disease, Vaccinations, and Lies. There are two peer pressure and official guilt trips used on parents who refuse vaccinations for their children. 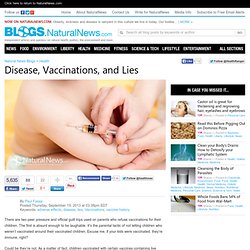 The first is absurd enough to be laughable. It’s the parental tactic of not letting children who weren’t vaccinated around their vaccinated children. Excuse me, if your kids were vaccinated, they’re immune, right? Could be they’re not. As a matter of fact, children vaccinated with certain vaccines containing live viruses, such as the oral polio vaccine (OPV), have spread the live viruses through viral shedding to infect others with a virus that mutates and becomes worse. And here’s the second guilt trip, impeding herd immunity by not getting their kids vaccinated.

The vaccine industry insists that their goal is to create herd immunity by vaccinating at least 90% of a given population. Herd immunity depicts a scenario where everyone within that given population is immune to the disease vaccinated against. Let's Make A Cancer Vaccine. September 15, 2013 by DAVE MIHALOVIC We're Running Out of Infectious Diseases, So Let's Make A Cancer Vaccine The title is utterly absurd, I know, but not if you're a vaccine manufacturer looking for another cash cow. 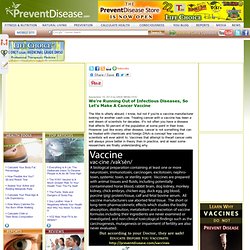 Treating cancer with a vaccine has been a wet dream of scientists for decades. It's not often you have a disease that affects 50 percent of the population at some point in their lives. However, just like every other disease, cancer is not something that can be treated with chemicals and foreign DNA--a concept few vaccine scientists will ever admit to.