7 Awesome Resources To Sharpen Your Coding Skills. Coding - That word can scare away a lot of people. 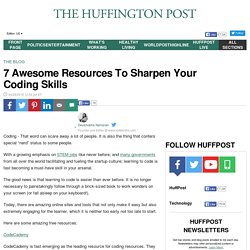 It is also the thing that confers special “nerd” status to some people. With a growing emphasis on STEM jobs like never before; and many governments from all over the world facilitating and fueling the startup culture; learning to code is fast becoming a must-have skill in your arsenal. The good news is that learning to code is easier than ever before. It is no longer necessary to painstakingly follow through a brick-sized book to work wonders on your screen (or fall asleep on your keyboard!).

Today, there are amazing online sites and tools that not only make it easy but also extremely engaging for the learner, which it is neither too early not too late to start. Here are some amazing free resources: CodeCademy is fast emerging as the leading resource for coding resources. Khan Academy makes learning anything look easy. PythonGuru is an online resource that designed specifically for learning the programming language Python. Google CS First. 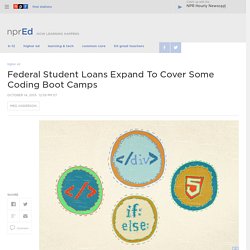 Carolyn Kaster/AP hide caption itoggle caption Carolyn Kaster/AP President Obama tours the Louisville-based tech company Indatus with Indatus president Philip Hawkins (left). Carolyn Kaster/AP Coder boot camps. Whatever you call them, these new players in higher education are multiplying. In three or four months of really long days, students with little prior experience are getting up to speed in the latest programming languages with Hack Reactor, General Assembly or Dev Bootcamp. Help kids code + explore computer science. Fortune. There was a time when knowing how to program was for the geekiest of geeks. 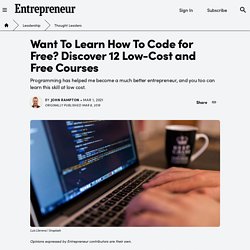 That’s not exactly the case today. As most entrepreneurs, freelancers and marketers will tell you, learning how to program can help you succeed. Over the past year, I've been learning to code. Thimble by Mozilla - An online code editor for learners & educators. Code Monster from Crunchzilla. <h2>Code Monster gets kids excited about programming. 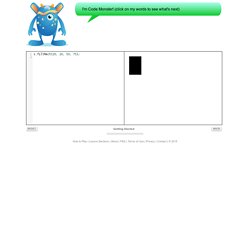 It is a combination of a game and tutorial where kids experiment with learning to code. <p> Code Monster use Javascript. Please enable Javascript if you want the play with the Code Monster. Learn. Code.org. Creative Computing. 7 units44 activitiesremixing encouraged download the guide> help learnerscreate new worldswith computing download the guide. 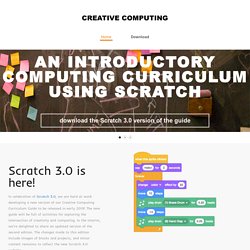 ScratchJr: Coding for kindergarten. Can children learn to code at the same age they’re learning to tie their shoes? 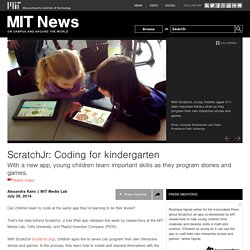 That’s the idea behind ScratchJr, a free iPad app released this week by researchers at the MIT Media Lab, Tufts University, and Playful Invention Company (PICO). With ScratchJr (scratchjr.org), children ages five to seven can program their own interactive stories and games. In the process, they learn how to create and express themselves with the computer, not just interact with it.

"As young children code with ScratchJr, they develop design and problem-solving skills that are foundational for later academic success," said Marina Umaschi Bers, professor in the Eliot-Pearson Department of Child Study and Human Development at Tufts, and director of the Tufts’ Development Technologies research group, which co-developed ScratchJr.

Teaching Coding: Where Do You Start? EdSurge Newsletters Receive weekly emails on edtech products, companies, and events that matter. 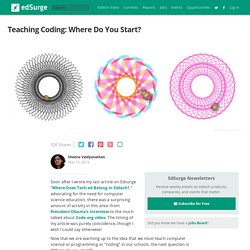 Soon after I wrote my last article on Edsurge “Where Does Tech-ed Belong in Edtech? ,” advocating for the need for computer science education, there was a surprising amount of activity in this area--from President Obama’s interview to the much talked about Code.org video. The timing of my article was purely coincidence, though I wish I could say otherwise!

Now that we are warming up to the idea that we must teach computer science or programming or “coding” in our schools, the next question is “Where do you start?” The advocacy channels and computer science organizations (CSTA, NCWIT, CSEdWeek, Code.org) give a number of helpful links to curriculum guides, tools, online programming courses and much more. I decided to look for a starting point based on what I have seen work again and again in my programming classes. While searching for this answer, I realized that it was actually obvious. Scratch. Logo Foundation. Tynker. Gamestar Mechanic. Give Your Kids a Most Excellent Summer Coding Adventure.

For a new generation of students growing up in a digitally-connected century, all roads lead to code. 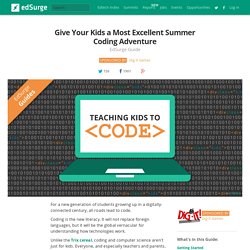 Coding is the new literacy. It will not replace foreign languages, but it will be the global vernacular for understanding how technologies work. Unlike the Trix cereal, coding and computer science aren't just for kids. Everyone, and especially teachers and parents, can lead by example and learn a few lines of HTML. Here's how Idit Harel, CEO of Globaloria, explains why parents need to code: Teaching Kids to Code. Every era demands--and rewards--different skills. 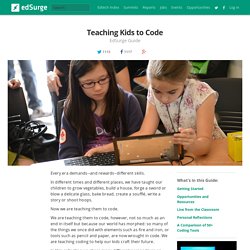 In different times and different places, we have taught our children to grow vegetables, build a house, forge a sword or blow a delicate glass, bake bread, create a soufflé, write a story or shoot hoops. Game Design 2015. Hi! 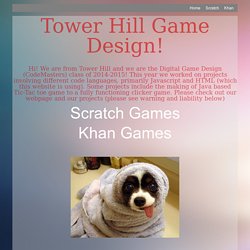 We are from Tower Hill and we are the Digital Game Design (CodeMasters) class of 2014-2015! This year we worked on projects involving different code languages, primarily Javascript and HTML (which this website is using). Some projects include the making of Java based Tic-Tac toe game to a fully functioning clicker game. Please check out our webpage and our projects (please see warning and liability below) Scratch Games Khan Games. Game Design 2015.