Christian-themed portraits by Kehinde Wiley – Art & Theology. “Painting is about the world we live in. 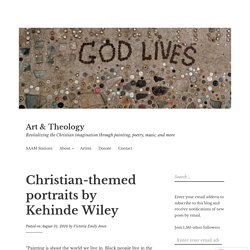 William Morris Gallery – Spotlight – Artforum International. “I began to take the DNA of [William] Morris and build upon it to create hybrids of my own, these kind of all over patterns that feel random and chaotic as opposed to that very rational order you see in traditional Morris prints.” 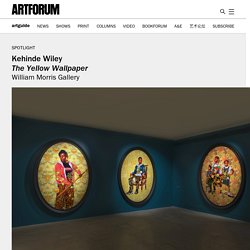 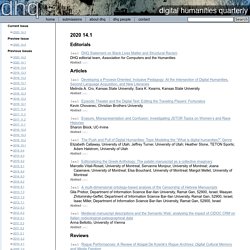 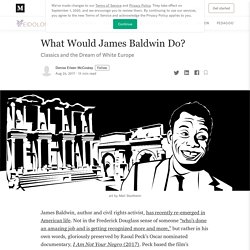 The Ancient Mediterranean Was Diverse. Why Do Some People Get So Upset When We Talk About It? An Investigation of Black Figures in Classical Greek Art. Pitcher (Oinochoe) in the Form of the Head of an African, about 510 B.C., attributed to Class B bis: Class of Louvre H 62. 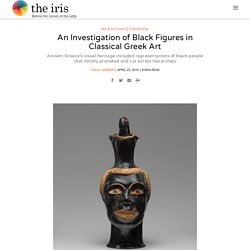 Terracotta, 8 7/16 in. high. The J. Paul Getty Museum, 83.AE.229. Digital image courtesy of the Getty’s Open Content Program In ancient Greece, men often escaped their daily grind to socialize at a symposium, or formalized drinking party. Black Figures in Classical Greek Art. Pitcher (Oinochoe) in the Form of the Head of an African, about 510 B.C.E., attributed to Class B bis: Class of Louvre H 62. 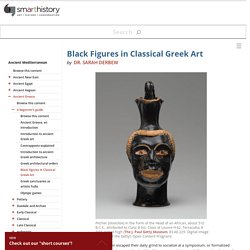 Terracotta, 8 7/16 inches high (The J. Paul Getty Museum, 83.AE.229. Museums are struggling to train their mostly white docents to talk about race. Palace Shaw was standing in one of the galleries in Boston’s Institute of Contemporary Art when she heard something that rattled her. 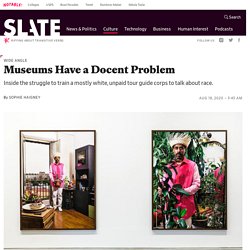 It was the summer of 2017, and the show on display was Nari Ward: Sun Splashed, a large retrospective of the Jamaican American artist’s work. Shaw, who had recently graduated from college, was working as a “visitor assistant”—which meant, she says, being a “mediator between the art and the visitor, but also kind of a policing role where I was enforcing museum policy.” She spent long days on her feet watching visitors stream in and out of galleries. That June day, one of the museum’s volunteer guides was leading a tour of four school-age girls.

Three of the girls were Black, says Shaw, and one was South Asian. How Latinx Artists Were Shut Out Of Art History. Artists who identify as Latinx — the gender-neutral term for a person of Latin American descent who lives in the United States — face unique challenges. 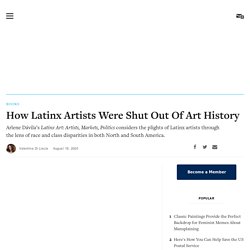 Their work is often devalued vis-à-vis that of their Latin American counterparts, who enjoy what scholar Arlene Dávila calls “national privilege”: a geographical presence in Central or South America and access to local spheres of influence, as well as the perception of authenticity from predominantly white, North American stakeholders. Conversely, the work of Latinx artists — especially those who were born in the US, are undocumented or have been exiled from their native countries, or otherwise maintain no ties to them, especially if they are Black or Indigenous — has been mischaracterized as illegitimate by the same audiences.

Nadine Zubair ندین sur Twitter : "I just found this painting of Col. Polier and his friends, c. 1786-87 including the German artist Johann Zoffany, himself. The painting is at the Victoria Memorial Hall, Kolkata. Where Should Art History Go in the Future? – ARTnews.com. Curricular changes rarely make headlines even in the confines of a college town, but after Yale University’s art history department announced plans to revamp its introductory survey courses with global offerings less focused on Europe and the United States, the news prompted a national outcry. 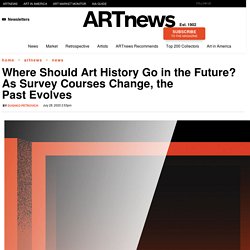 As reported by the Yale Daily News this past January in a story that spread far and wide, the long-standing course “Introduction to Art History: Renaissance to the Present” would be replaced by a selection of thematic classes: “Art and Politics,” “Global Craft,” “The Silk Road,” and “Sacred Places.” Home - The Fashion and Race Database. The Casual Colonialism of Lara Croft and Indiana Jones. Open Arts Journal sur Twitter : "Several of our contributors have explored museums and collecting institutions. For example, in Issue 3, @LivRamskjaer looks at ways in which a group of Norwegian museums have dealt with marginal, hidden and contested pasts. “I’m always thinking about what can be better,” the artist and activist Faith Ringgold said. “And if you don’t get it out there, the situation will never change.” Discover the queer women &amp; non-binary artists who used fashion as 'a powerful way to question how we represent ourselves, outside so-called norms around gender and sexuality.' #PrideMonth 'Lili Elbe (?)' attributed to Gerda Wegener (1885–1940) □ @Expl.

Is Egyptology racist? Yes. So what can we do about it? Bibliography of BIPOC Scholarship in 19th-Century Art History & Visual Culture. Here is a painting of Thomas-Alexandre Dumas, a POC who led French armies during the French Revolutionary Wars. He became a full general &amp; one of the most feared men in Europe. His existence triggers racists who want to white-wash French history, so p. The Overlooked Role of Black Women in Renaissance Paintings. 1770s – Portrait of a Lady Holding an Orange Blossom.