Regulating Drug Company Promotion in an Era of Unprecedented Advertisement. The US Food and Drug Administration (FDA) draws a distinction between direct-to-consumer advertising of specific drug products, which it regulates, and advertisements intended to create disease awareness, which it does not. 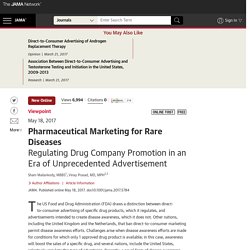 Other nations, including the United Kingdom and the Netherlands, that ban direct-to-consumer marketing permit disease awareness efforts. Challenges arise when disease awareness efforts are made for conditions for which only 1 approved drug product is available; in this case, awareness will boost the sales of a specific drug, and several nations, include the United States, selectively regulate this type of advertising. 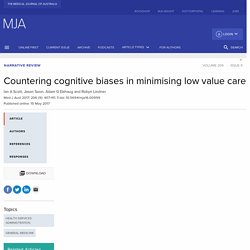 This is care that confers little or no benefit, may instead cause patient harm, is not aligned with patient preferences, or yields marginal benefits at a disproportionately high cost. In this article, we discuss cognitive biases that predispose clinician decision making to low value care. We used PubMed listings of original articles from 1990 to 2015 related to cognitive bias in clinical decision making, including a recent systematic review,1 files of relevant publications held by the authors and sentinel texts in cognitive psychology as applied to clinical practice (Appendix). Clinicians’ Expectations of Treatments, Screening, and Test Benefit and Harm. Question Do clinicians have accurate expectations of the benefits and harms of treatments, tests, and screening tests? 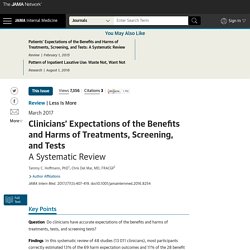 Findings In this systematic review of 48 studies (13 011 clinicians), most participants correctly estimated 13% of the 69 harm expectation outcomes and 11% of the 28 benefit expectations. Theconversation. In 2013 and 2014, more than 314,000 CT scans of the lower back were ordered in Australia, most of which showed no abnormalities. 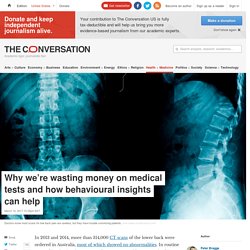 In routine cases of low back pain, X-rays and CT scans provide no meaningful information to guide treatment, exposing patients to unnecessary radiation. A number of factors have contributed to this, including increased consumer expectations, an ageing population, financial incentives (where doctors have a stake in imaging services) and “defensive medicine”, which is doctors protecting themselves against possible litigation arising from missing a diagnosis. This is one of numerous areas of wasted health-care expenditure around the world. Studies in the US have reported that 20 to 25% of all healthcare delivered is either not needed, or harmful. The situation in Australia appears much the same. We can reduce some of this waste by looking at why doctors continue to order these tests and use behavioural techniques to change the situation.

Why so much waste? What Good Is 'Raising Awareness?' - The Atlantic. In 2010, a strange meme spread across Facebook. 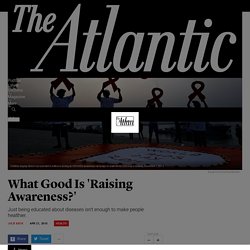 People’s feeds were suddenly filled with one-word statuses saying the name of a color, nothing more. And most of these posts were from women. The women had received messages from their Facebook friends that were some variation on this, according to The Washington Post: "Some fun is going on ... just write the color of your bra in your status.

Just the color, nothing else. SAGE Journals: Your gateway to world-class journal research. Setting a research agenda for medical overuse. Diagnosing overdiagnosis: conceptual challenges and suggested solutions. Physician perceptions of Choosing Wisely and drivers of overuse. "I'm just a patient" Fear and Uncertainty drivers of Emergency Room Utilization. Our findings highlight an important, yet to date underappreciated, potential driver of ED utilization: fear. 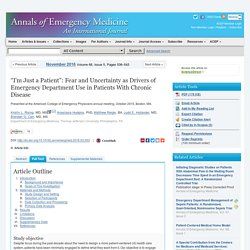 Many patients come to the ED primarily because they are afraid in relation to unexplained symptoms. Their primary need and expectation is that they will be reassured through answers, either by receiving a benign explanation for their symptoms or by receiving a diagnosis as a result of the extensive testing available in the ED. When test results are negative or inconclusive, many patients remain uncertain and thus have their primary need unmet. Although providers may believe that “no news is good news” when it comes to negative test results, our findings suggest that patients think otherwise. Physicians’ beliefs about breast cancer surveillance testing are consistent with test overuse. Health Care Myth Busters: Is There a High Degree of Scientific Certainty in Modern Medicine? Editor's Note: The following is an excerpt from the new book Demand Better! 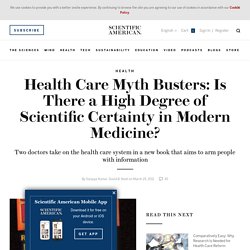 Revive Our Broken Health Care System (Second River Healthcare Press, March 2011) by Sanjaya Kumar, chief medical officer at Quantros, and David B. Nash, dean of the Jefferson School of Population Health at Thomas Jefferson University. In the following chapter they explore the striking dearth of data and persistent uncertainty that clinicians often face when having to make decisions. Myth: There is a high degree of scientific certainty in modern medicine "In America, there is no guarantee that any individual will receive high-quality care for any particular health problem. Tolerating Uncertainty - The Next Medical Revolution? 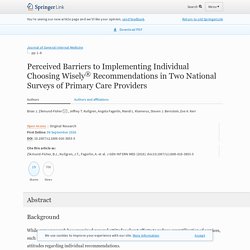 For some recommendations, such as limiting cardiac screening before low-risk surgeries, the answer appears to be “not much,” or perhaps “we’re already doing it.”16 Very few survey respondents either perceived difficulty in following that recommendation (and the others shown in Fig. 1) or anticipated that patients would find it difficult to accept. Health: perception versus observation. Has Choosing Wisely® affected rates of dual-energy X-ray absorptiometry use? Patient and Physician Attitudes Toward Low-Value Diagnostic Tests.

Reducing general practice workload. How Hospitals Can Kill Us. Imagine an institution where the occupants are routinely left immobile, deprived of sleep and fed a diet that is tasteless and nutritionally marginal. 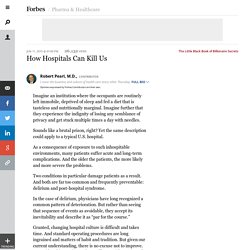 Imagine further that they experience the indignity of losing any semblance of privacy and get stuck multiple times a day with needles. Sounds like a brutal prison, right? Yet the same description could apply to a typical U.S. hospital. As a consequence of exposure to such inhospitable environments, many patients suffer acute and long-term complications.

And the older the patients, the more likely and more severe the problems. Two conditions in particular damage patients as a result. The Tyranny of Diagnosis: Specific Entities and Individual Experience. Patients Resist 'Less Is More,' a MedPage Today Survey. Physicians trying a 'less is more' approach to clinical care by limiting "low-value" tests or procedures often received pushback from patients, according to a MedPage Today reader survey. 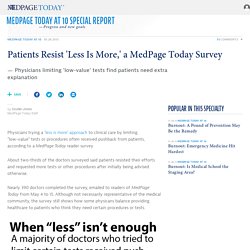 About two-thirds of the doctors surveyed said patients resisted their efforts and requested more tests or other procedures after initially being advised otherwise. Nearly 390 doctors completed the survey, emailed to readers of MedPage Today from May 4 to 15. Although not necessarily representative of the medical community, the survey still shows how some physicans balance providing healthcare to patients who think they need certain procedures or tests.

Article - Southern Medical Association. Variations in health care. Variations in health care in the NHS are a persistent and ubiquitous problem. But which variations are acceptable or warranted – for example, variations driven by clinical need and informed patient choice – and which are not? The important question is how to promote 'good' variation and minimise 'bad' variation. We Have Too Many Specialists and Too Few General Practitioners. "It's more important to know the patient who has the disease, than the disease the patient has. " This was true when Hippocrates said it 2500 years ago -- and it remains true today. Unfortunately, doctors no longer know their patients. GP'S are overworked, underpaid, and must shuttle patients in and out of the office in less than ten minutes.

Specialists tend to treat the test, not the patient, and earn their living doing procedures that often are unnecessary. Wherever I travel around the world, I find the same problem -- too few GP's, too many specialists. Medical mistakes are far too common because each specialist is treating (or more likely over treating) her own pet organ.

Published Online: February 12, 2015. doi:10.1001/jamaoncol.2014.197. Author Contributions: Drs Gabler and Emanuel had full access to all of the data in the study and takes responsibility for the integrity of the data and the accuracy of the data analysis. From imaging gatekeeper to service provider. Are Good Doctors Bad for Your Health? Role of fear in overdiagnosis and overtreatment—an essay by Iona Heath.

Iona Heath argues that doctors and patients need to face up to their fears of uncertainty and death if we are to control overmedicalisation In the preface to her influential essay Illness as Metaphor, Susan Sontag wrote: Illness is the night side of life, a more onerous citizenship. Everyone who is born holds dual citizenship, in the kingdom of the well and in the kingdom of the sick. Although we all prefer to use the good passport, sooner or later each of us is obliged, at least for a spell, to identify ourselves as citizens of that other place.1.

The Only Certainty Is Uncertainty  Harvard study: “Cowboy Doctors” partly to blame for healthcare costs. Who’s driving up U.S. healthcare costs? Why Doctors Are Ordering Too Many CT Scans and MRIs. Advanced radiology tests such as CT scans, MRIs and ultrasounds have dramatically changed how patients are diagnosed and treated. Just a decade ago, patients were still being subjected to exploratory surgery, in which a surgeon cuts open the abdomen to look for problems; today, CT scans allow doctors to make diagnoses without a scalpel. Importance of patient pressure and perceived pressure and perceived medical need for investigations, referral, and prescribing in primary care: nested observational study. Why People Stick with Cancer Screening, Even When It Causes Harm. The data on PSA testing to detect prostate cancer has long been shaky — so much so that the discoverer of PSA (or prostate-specific antigen, an enzyme made by the prostate) himself decried the test two years ago as “hardly more effective than a coin toss.”