Investigating History Daily. These 7 Unsolved Mysteries Will Leave You Terrified And Scratching Your Head. Procedural police shows on TV have made most of us addicted to researching and solving crimes. 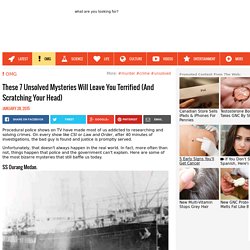 On every show like CSI or Law and Order, after 40 minutes of investigations, the bad guy is found and justice is promptly served. Unfortunately, that doesn't always happen in the real world. In fact, more often than not, things happen that police and the government can't explain. Out-of-place artifact. Out-of-place artifact (OOPArt) is a term coined by American naturalist and cryptozoologist Ivan T. 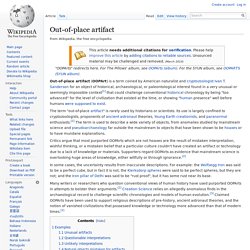 Sanderson for an object of historical, archaeological, or paleontological interest found in a very unusual or seemingly impossible context[1] that could challenge conventional historical chronology by being "too advanced" for the level of civilization that existed at the time, or showing "human presence" well before humans were supposed to exist. Critics argue that most purported OOPArts which are not hoaxes are the result of mistaken interpretation, wishful thinking, or a mistaken belief that a particular culture couldn't have created an artifact or technology due to a lack of knowledge or materials. Supporters regard OOPArts as evidence that mainstream science is overlooking huge areas of knowledge, either willfully or through ignorance.[2] In some cases, the uncertainty results from inaccurate descriptions.

Examples[edit] Unusual artifacts[edit] Questionable interpretations[edit] A New Species Of Ancient Man Discovered. An unusually thick lower jawbone with giant teeth discovered and literally fished up 15 miles out to sea by Fishermen working within the Penghu channel off Taiwan. 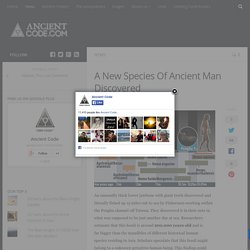 They discovered it in their nets in what was supposed to be just another day at sea. Researchers estimate that this fossil is around 200,000 years old and is far bigger than the mandibles of different historical human species residing in Asia. Scholars speculate that this fossil might belong to a unknown primitive human being. We could all be angels. The Archangel Michael in a 17th-century depiction by Guido Reni. 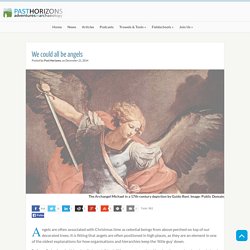 Image: Public Domain Angels are often associated with Christmas time as celestial beings from above perched on top of our decorated trees. Controversy as evidence for ancient Indian Aviation Technology to be examined at Science Congress. The Indian Science Congress hosted at Mumbai University on January 3, which includes six Nobel laureates and four recipients of prestigious scientific prizes in its roster of speakers, will include a lecture examining ancient aviation technology in the Vedas, leading some scientists to argue that it undermines the empirical evidence on which the congress was founded. 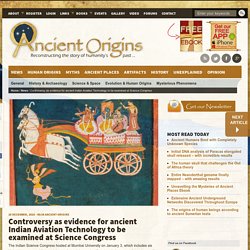 The lecture will be presented by Captain Anand J Bodas, a retired principal of a pilot training facility, and Ameya Jadhav, a lecturer at the Swami Vivekananda International School and Junior College in Mumbai, who will draw upon the ancient Vedic texts to support the view that there was flying technology in ancient India. "The Vedic or rather ancient Indian definition of an aeroplane was a vehicle which travels through the air from one country to another country, from one continent to another continent, from one planet to another planet," Captain Anand J Bodas told the Mumbai Mirror. » Fascinating Evidence And Explanations Of The Location Of Noah’s Ark. By Dan Eden for viewzone Why is this not a BIG story? 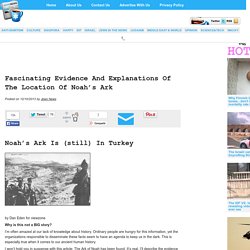 I’m often amazed at our lack of knowledge about history. Ordinary people are hungry for this information, yet the organizations responsible to disseminate these facts seem to have an agenda to keep us in the dark. This is especially true when it comes to our ancient human history. Is Makhunik an Ancient City of Little People? In August 2005, a tiny mummified body was found in the ancient Persian village of Makhunik in what is now Iran. 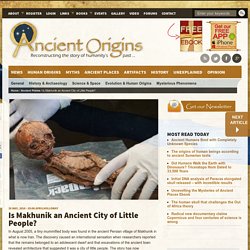 The discovery caused an international sensation when researchers reported that the remains belonged to an adolescent dwarf and that excavations of the ancient town revealed architecture that suggested it was a city of little people. The story has now resurfaced, following a report in PressTV, and is making its way rapidly around alternative news sites. Here we explore whether an ancient city of dwarfs really existed, or whether it is all just media sensation. The mysterious ancient coral reef city of Nan Madol. Off the island of Pohnpei in Micronesia, lies the ancient city of Nan Madol, the only ancient city ever built upon a coral reef. 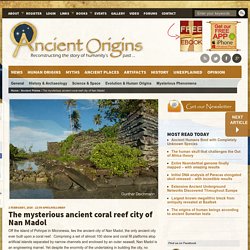 Comprising a set of almost 100 stone and coral fill platforms atop artificial islands separated by narrow channels and enclosed by an outer seawall, Nan Madol is an engineering marvel. Yet despite the enormity of the undertaking in building the city, no records exist as to when exactly it was built, where the enormous rocks came from, how they were transported there, and for what reason it was constructed on top of a reef. » 3 Unexplainable Facts About The Great Pyramids. The Great Pyramids of Giza have filled our lives with mystery and wonder for generations. 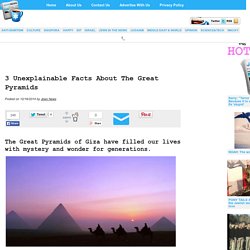 Centuries of scientists, explorers, archeologists and many more have ventured to Egypt to inspect and analyze the mysteries of the massive structures. To see them in person is something that many claim is a profound experience. In an article by Collective Evolution titled “Mind-Altering Facts About The Great Pyramid At Giza That Still Have No Explanation” [1], author Arjun Walia writes: » What Was Your Past Life? Over the last few centuries, it’s thought that dozens of ships and planes have disappeared under mysterious circumstances in the area, earning it the nickname “The Devil’s Triangle.” 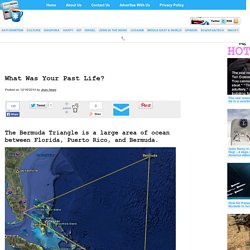 People have even gone so far as to speculate that it’s an area of extra-terrestrial activity or that there is some bizarre natural scientific cause for the region to be hazardous; but most likely, it’s simply an area in which people have experienced a lot of bad luck—the idea of it being a “vortex of doom” is no more real than Bigfoot or the Loch Ness Monster. The Bermuda Triangle’s bad reputation started with Christopher Columbus. According to his log, on October 8, 1492, Columbus looked down at his compass and noticed that it was giving weird readings. He didn’t alert his crew at first, because having a compass that didn’t point to magnetic north may have sent the already on edge crew into a panic. The secret code of the number three. Throughout human history, the number three has always had a unique significance, but why? If we look back in history at ancient mankind, no matter which culture we observe the number three has always been present, of extreme importance.

What is it about the number three that makes it so important that it is present in religion, architecture, mathematics and many other parts of humanity. According to myth, the destiny of gods and men is controlled by all-powerful beings known as the Three Fates. Various cultures across the world have long shared a belief that the number three represents something sacred, mystical, universal and divine. In the sixth century BC, Greek mathematician and philosopher Pythagoras introduced his famous theorem: A squared + B squared = C squared. » Who exactly are the Fallen Angels that the Torah refers to and what is their significance. Just before the story of Noah’s ark, the Torah presents a cryptic narrative that has mystified and intrigued scholars for generations: And it came to pass when man commenced to multiply upon the face of the earth, and daughters were born to them, that the beneielokim saw the daughters of man when they were beautifying themselves, and they took for themselves wives from whomever they chose.

And the L‑rd said, “Let My spirit not quarrel forever concerning man, because he is also flesh, and his days shall be a hundred and twenty years.” Was There A Civilization On Earth Almost 2 Billion Years Ago? In June 1972, nuclear scientists at the Pierrelatte uranium enrichment plant in south-east France noticed a strange deficit in the amount of uranium-235 they were processing. That’s a serious problem in a uranium enrichment plant where every gram of fissionable material has to be carefully accounted for.

In many depictions of the Anunnaki, we can see strange objects worn by “those who came from the stars”, one of the most interesting examples are “wrist watches” which appear in almost every single depiction of the Anunnaki. The Sumerians were the first people who started building actual cities, organised using actual city grids like we see in modern day cities around the world, according to the Ancient Alien theory, the Anunnaki transferred this knowledge to ancient man.In the 19th century archaeologists exploring the ancient ruins of Nineveh discovered 22,000 clay tablets which are directly connected to the Anunnaki.In 1976 author Sitchin published his personal translations of the Sumerian texts in a series of books called “The Earth Chronicles“.