The origins of human beings according to ancient Sumerian texts 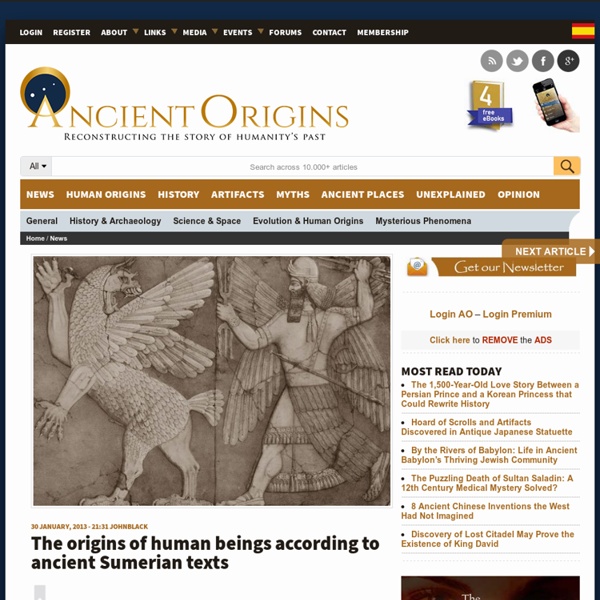 Sumer, or the ‘land of civilized kings’, flourished in Mesopotamia, now modern-day Iraq, around 4500 BC. Sumerians created an advanced civilization with its own system of elaborate language and writing, architecture and arts, astronomy and mathematics. Their religious system was a complex one comprised of hundreds of gods. According to the ancient texts, each Sumerian city was guarded by its own god; and while humans and gods used to live together, the humans were servants to the gods. The Sumerian creation myth can be found on a tablet in Nippur, an ancient Mesopotamian city founded in approximately 5000 BC. The creation of Earth ( Enuma Elish ) according to the Sumerian tablets begins like this: Sumerian mythology claims that, in the beginning, human-like gods ruled over Earth. The texts mention that at some point the gods mutinied against their labour. When the gods like men Bore the work and suffered the toll The toil of the gods was great, The work was heavy, the distress was much. Related:  Book material • Prehistoric • 20180510-a

The 7,000-year-old Ubaid Lizardmen At the Archaeological site fo Al-Ubaid, researchers have found numerous pre-sumerian artifacts dating back at least 7,000 years, between these items strange looking figurines have been discovered with a very strange look. a combination of human and lizard-like features combined. The Ubaid period is a prehistoric period of Mesopotamia, the place where according to many, modern civilization was kick-started with the Sumerians. The name derives from Tell al-‘Ubaid where the earliest large excavation of Ubaid period material was conducted. According to researchers it was during this period that a lot of advancements in society were made, people started to think differently and act differently. What makes this culture so interesting apart of their social and architectural advancements are the discoveries made at Tell al-‘Ubaid. Source: British Museum Archaeology.About Wikipedia He has a passion for History, Archaeology and Space.

Fossil human traces line to modern Asians 22 January 2013Last updated at 02:45 ET The person shared a common origin with the ancestors of modern Asians Researchers have been able to trace a line between some of the earliest modern humans to settle in China and people living in the region today. The evidence comes from DNA extracted from a 40,000-year-old leg bone found in a cave near Beijing. Results show that the person it belonged to was related to the ancestors of present-day Asians and Native Americans. The results are published in the journal PNAS. Humans who looked broadly like present-day people started to appear in the fossil record of Eurasia between 40,000 and 50,000 years ago. But many questions remain about the genetic relationships between these early modern humans and present-day Homo sapiens populations. For example, some evidence hints at extensive migration into Europe after the last Ice Age. New technique The fossils were discovered in 2003 at Tianyuan near Beijing

Physicists Confirm There's a Second Layer of Information Hidden in Our DNA In Brief Theoretical physicists have confirmed that it's not just the information coded in our DNA that shapes who we are—it's also the way DNA folds itself that controls which genes are expressed inside our bodies. We all learned in high school how Watson and Crick pieced together the findings of many scientists to come up with a model of deoxyribonucleic acid (DNA). Information in DNA is stored as code sequences made up of nitrogenous bases. Each cell in our body contains around 2 meters of DNA. Learn more about DNA and nucleosomes in the video below: The folding mechanism of DNA is believed to play a large role in how genes are read by the rest of the cell. Physicist Helmut Schiessel and his group simulated the folding of DNA strands with randomly assigned cues. The results confirm that this second layer of information exists.

Tărtăria tablets The Tărtăria tablets are three tablets, discovered in 1961 by archaeologist Nicolae Vlassa at a Neolithic site in the village of Tărtăria (about 30 km (19 mi) from Alba Iulia), in Romania. The tablets, dated to around 5300 BC,[2] bear incised symbols - the Vinča symbols - and have been the subject of considerable controversy among archaeologists, some of whom claim that the symbols represent the earliest known form of writing in the world. In 1961, members of a team led by Nicolae Vlassa, an archaeologist at the National Museum of Transylvanian History, Cluj-Napoca in charge of the site excavations, unearthed three inscribed but unbaked clay tablets, together with 26 clay and stone figurines and a shell bracelet, accompanied by the burnt, broken, and disarticulated bones of an adult male.[3] Two of the tablets are rectangular and the third is round. They are all small, the round one being only 6 cm (2½ in) across, and two — one round and one rectangular — have holes drilled through them.

New Evidence Lost Civilizations Really Existed Source: www.wakingtimes.com | Original Post Date: September 12, 2014 – What if everything you’ve been taught about the origins of civilization is wrong? Be it that certain pieces of our history have been intentionally hidden, or that we have yet to discover and realize the true story of our past, new archaeological and geological discoveries are revealing that sophisticated civilizations have likely existed in prehistoric times. Until recently, the archaeological community has spread the view that the beginnings of human civilization started after the last Ice Age, which ended around 9,600 BC. All human ancestors prior to this time were recognized as primitive, uncivilized hunter-gatherers who were incapable of communal organization and architectural design. This is the established chronology being taught in schools and believed by modern society. Until now. “Everything we’ve been taught about the origins of civilization may be wrong. Since 2011, Dr.

The Kardashev Scale - Type I, II, III, IV & V Civilization We have reached a turning point in society. According to renowned theoretical physicist Michio Kaku, the next 100 years of science will determine whether we perish or thrive. Will we remain a Type 0 civilization, or will we advance and make our way into the stars? Experts assert that, as a civilization grows larger and becomes more advanced, its energy demands will increase rapidly due to its population growth and the energy requirements of its various machines. With this in mind, the Kardashev scale was developed as a way of measuring a civilization’s technological advancement based upon how much usable energy it has at its disposal (this was originally just tied to energy available for communications, but has since been expanded). The scale was originally designed in 1964 by the Russian astrophysicist Nikolai Kardashev (who was looking for signs of extraterrestrial life within cosmic signals). First, it is important to note that the human race is not even on this scale yet. Type V.

The Disappearance Of The Children Of Viracocha - Cuzco: The City Which The Inca Found, Not Founded - Part 3 By: Brien Foerster - MessageToEagle.com - The greatest mystery about the Inca is not their accomplishments, but their origins. Where could such a sophisticated culture have come from? It is well written through accounts of the conquistadors, and Inca descendants that these people came to Cuzco as a fully developed society; teaching agriculture, metallurgy, animal husbandry, textile weaving, and the arts of warfare and politics, amongst other civilizing pursuits, to seemingly less developed people who were already inhabiting the area. Cultures clearly don’t appear out of no where fully developed, unless they just climbed out of a space ship; and I am not going to entertain this idea in this paper; such an idea is both too far fetched and too easy, at the same time. Tiwanku and the Island of the Sun in Lake Titicaca are the most commonly believed source places of the Inca. (or Tiahuanaco) is clearly a mysterious place. Between 1927 and 1930 Prof. An aberration? Read part 1 Read part 2

Did An Ancient Mega-tsunami Crash Into Madagascar? Sometime in the last 10,000 years, a gigantic space rock plummeted into the Indian Ocean, creating a mega-tsunami of massive proportions. Colossal waves enveloped the coast of Africa and left what we see today as chevrons, or wedge-shaped sediment deposits, in Madagascar. But did this actually happen? One might think that geological breadcrumbs are easy to spot, but it’s quite the contrary: As ancient mega-tsunamis wash away, researchers are left looking for signs that they were ever there, or to the contrary, that they were never there to begin with. The debate is neatly summed up by geologist Dallas Abbott: "While most researchers have assumed that the sand in the dunes was transported inland by the wind, we instead have proposed that the deposits are from a mega-tsunami event." The carbonate primarily came from marine microfossils, which is why the researchers say their evidence adds weight to the mega-tsunami theory. [H/T: National Geographic]

"Syria's Stonehenge" - Underground Tombs Alignments And Stone Circles Older Than Anything Seen In Europe MessageToEagle.com - Today, it's the Syrian desert with unknown rock formations, stone circles, lines of stone and an ancient monastery with ancient tombs, corridors and walls covered with frescoes. Once upon a time, very long ago, the region was probably much greener. Analysis of fragments of stone tools found in the area suggests the rock formations are much older than the monastery, perhaps dating to the Neolithic Period or early Bronze Age, 6,000 to 10,000 years ago. Deir Mar Musa; interior | 11th -13th century |Damascus | Photographer: James J. O’Donnell In Western Europe megalithic construction involving the use of stone has been dated to as early as ca. 4500 BC. Deir Mar Musa But to conduct archareological research in such region is not an easy task because the political conflict is tearing apart the Middle Eastern nation. Research at the monastery has led to a growing research interest in the archaeology of Christianity and monotheism generally in the Holy Land. Mar Musa's frescoes

Oldest Human DNA Reveals Mysterious Branch of Humanity The oldest known human DNA found yet reveals human evolution was even more confusing than thought, researchers say. The DNA, which dates back some 400,000 years, may belong to an unknown human ancestor, say scientists. These new findings could shed light on a mysterious extinct branch of humanity known as Denisovans, who were close relatives of Neanderthals, scientists added. Although modern humans are the only surviving human lineage, others once strode the Earth. Genetic analysis suggests the ancestors of modern humans interbred with both these extinct lineages. Pit of Bones To discover more about human origins, researchers investigated a human thighbone unearthed in the Sima de los Huesos, or "Pit of Bones," an underground cave in the Atapuerca Mountains in northern Spain. The thighbone of the 400,000-year-old hominid from Sima de los Huesos, Spain.Credit: Javier Trueba, MADRID SCIENTIFIC FILMS "This is a very interesting time range," Meyer told LiveScience. Denisovan relative?