Pregnancy and Birth, and the Gut Microbiome

The Vaginal Microbiome. Vaccine for bacteria carried by 20% of pregnant women ‘could prevent 100,000 baby deaths’ More than 100,000 stillbirths and baby deaths worldwide could be prevented by the development of a vaccine against an infection commonly carried by pregnant women, according to a groundbreaking report. 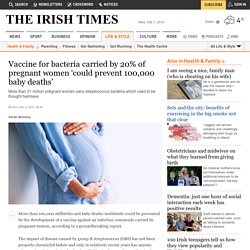 The impact of disease caused by group B streptococcus (GBS) has not been properly chronicled before and only in relatively recent years has anyone taken seriously its role in the deaths of babies in the womb as well as in the early days of life. Worldwide, more than 21 million pregnant women carry the bacteria which used to be thought harmless, say researchers from the London School of Hygiene and Tropical Medicine (LSHTM). What You Need To Know About Your Baby's Microbiome. Whether you have an antibiotic-free vaginal delivery or not, any boost you can provide to nurture your baby's developing microbiome can provide invaluable long-term benefits for their health. 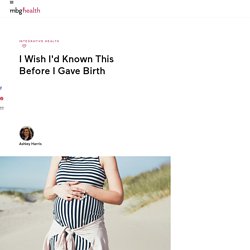 So what can you do to promote a healthy microbiome in your infant? Quite a lot, it turns out—and you can start right after birth. If possible, have skin-to-skin contact with your baby immediately. Your skin contains healthy microbes that can be transferred to your child by contact, helping boost their skin's protective barrier. Pregnancy and the microbiome — The American Microbiome Institute. Rite of Passage. Anna Simonsen-Meehan felt robbed. 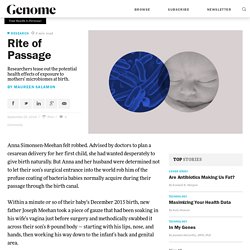 Advised by doctors to plan a cesarean delivery for her first child, she had wanted desperately to give birth naturally. But Anna and her husband were determined not to let their son’s surgical entrance into the world rob him of the profuse coating of bacteria babies normally acquire during their passage through the birth canal. Within a minute or so of their baby’s December 2015 birth, new father Joseph Meehan took a piece of gauze that had been soaking in his wife’s vagina just before surgery and methodically swabbed it across their son’s 8-pound body — starting with his lips, nose, and hands, then working his way down to the infant’s back and genital area. 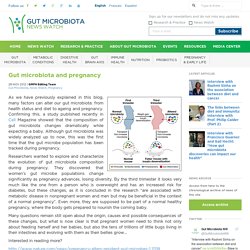 Confirming this, a study published recently in Cell Magazine showed that the composition of gut microbiota changes dramatically while expecting a baby. Tylenol in Pregnancy and ADHD. Study shows “just in case” antibiotics in late pregnancy may have health consequences for offspring. Babies' infection risk higher if pregnant mums take antibiotics, according to new research - Health - ABC News.

New Australian research has found if women take antibiotics while pregnant, there is a 20 per cent increased risk of their baby or child being hospitalised for an infection, compared to those children whose mums did not take the medication. 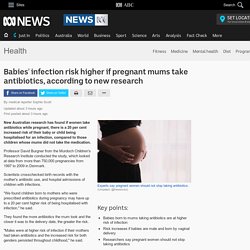 Key points: pregnant women taking antibiotics Key points: Babies born to mums taking antibiotics are at higher risk of infectionRisk increases if babies are male and born by vaginal deliveryResearchers say pregnant women should not stop taking antibiotics Professor David Burgner from the Murdoch Children's Research Institute conducted the study, which looked at data from more than 750,000 pregnancies from 1997 to 2009 in Denmark. Scientists crosschecked birth records with the mother's antibiotic use, and hospital admissions of children with infections. "We found children born to mothers who were prescribed antibiotics during pregnancy may have up to a 20 per cent higher risk of being hospitalised with infection," he said. Antibiotics resistance explained. 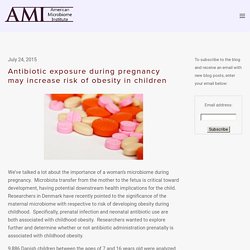 Microbiota transfer from the mother to the fetus is critical toward development, having potential downstream health implications for the child. Researchers in Denmark have recently pointed to the significance of the maternal microbiome with respective to risk of developing obesity during childhood. Specifically, prenatal infection and neonatal antibiotic use are both associated with childhood obesity. Researchers wanted to explore further and determine whether or not antibiotic administration prenatally is associated with childhood obesity. 9,886 Danish children between the ages of 7 and 16 years old were analyzed over 10 years, and information was collected from routine school anthropometric evaluations. Among all 9,886 children, 768 (7.8%) were overweight as determined by body-mass index ratios.

These findings point to an interesting relationship that deserves further exploration. Pregnancy & early life - Gut Microbiota for Health. The Impact of a Western Style Diet During Pregnancy. Taylor Soderborg is a 3rd year MD/PhD student at the University of Colorado Denver, School of Medicine, pursuing a PhD in integrative physiology: reproductive sciences track. 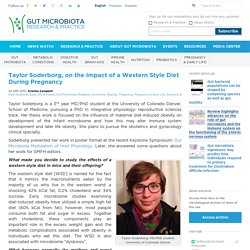 Exploring how mom's stress during pregnancy might affect her child's brain development—depending on her gut microbiota. Maternal stress alters offspring gut and brain through vaginal microbiome. Changes in the vaginal microbiome are associated with effects on offspring gut microbiota and on the developing brain, according to a new study published in Endocrinology, a journal of the Endocrine Society. 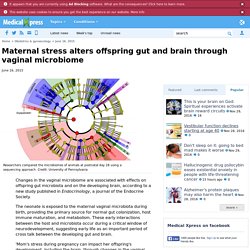 The neonate is exposed to the maternal vaginal microbiota during birth, providing the primary source for normal gut colonization, host immune maturation, and metabolism. These early interactions between the host and microbiota occur during a critical window of neurodevelopment, suggesting early life as an important period of cross talk between the developing gut and brain. Maternal stress could alter a newborn’s gut and brain  For some time, science has known that exposure to vaginal microbiota is crucial for newborn health. 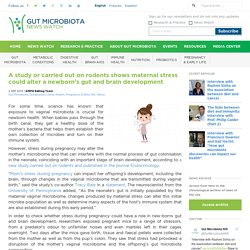 Neurodevelopmental Disorders Linked To Disrupted Fetal Brain Immunity. Disrupted fetal immune system development, like that caused by viral infection in the mother, may be a key factor in the later appearance of certain neurodevelopmental disorders, according to a study from the Weizmann Institute. 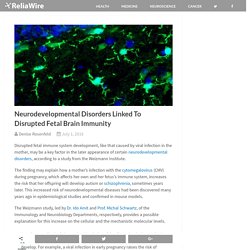 The finding may explain how a mother’s infection with the cytomegalovirus (CMV) during pregnancy, which affects her own and her fetus’s immune system, increases the risk that her offspring will develop autism or schizophrenia, sometimes years later. This increased risk of neurodevelopmental diseases had been discovered many years ago in epidemiological studies and confirmed in mouse models. The Weizmann study, led by Dr. The placental microbiome — The American Microbiome Institute. Microbiome populations have been well-characterized in many distinct body-sites. Interestingly, there is a lack of knowledge in the microbiome of the placenta, an environment that was long thought to be sterile.

Investigating the placenta is important toward understanding the microbiome in human development, especially in light of previous evidence demonstrating that human microbiota populations fluctuate extensively in the first year(s) of life. The placenta is the cradle of life for fetal development, leading researchers from Baylor School of Medicine to study the microbiome of this tissue. Placenta samples were collected and analyzed to characterize the placenta microbiome, and explore links to fetal development and microbiome compositions. 320 placenta specimens were collected, and PCR was used to characterize bacterial populations. The placenta harbors a unique microbiome.

Contrary to the common idea of a “sterile” intrauterine environment, Aagaard and coauthors demonstrated the presence of a microbiome in placentas from 320 healthy pregnancies, collected under sterile conditions. This microbiome was quite different from that reported in other parts of the mother´s body including the vagina and the gut, and resembled more the microbiome of her oral cavity, however in much lower abundance. This raises the question – without being able to answer it yet – whether bacteria ingested via food of mothers are able to affect the microbiome development of the baby even before delivery.

Microbe Translocation and Colonization in the Womb. How might microorganisms move from one part of the body to another? Let’s begin with the womb, where the concept of fetal colonization has rapidly gained acceptance, indicated by meconium and placental microbe studies. A new stool study reveals virus populations are dynamic in healthy infants. The infant virome is most diverse early in life, then bacteria flourish as viral counts decline. Most interestingly, the main types of viruses were identified as bacteriophages. These viruses infecting bacteria were found richest and most diverse in early life. Mouse study sheds light on how mom’s gut microbiota during pregnancy shapes the immune system of her offspring - Gut Microbiota for Health.

Babies are born with immature immune systems. Until now, it was believed that the birth process was the first opportunity for microorganisms from the mother to colonize the baby’s gut and, thus, to shape the immune system. Now, a team formed by German and Swiss scientists have discovered that this interaction with the baby’s immune system starts much earlier than previously thought: during pregnancy. According to their findings, published in Science magazine, some molecules produced by the gut microbiota and/or non-living bacterial fragments are transferred from the mother to the baby through the placenta or, later, through antibodies present in breast milk.

Bacteria could cause women to give birth prematurely, study finds. Should women with gestational diabetes mellitus use probiotics? - Gut Microbiota for Health. Gestational diabetes mellitus (GDM) is one of the most frequent metabolic complications of pregnancy and its prevalence is up to 12% in developed countries. Nowadays, several studies are investigating new therapies for glucose control that may complement diet, exercise, and pharmacological therapies. Among them, probiotics potentially represent a novel way to improve maternal metabolic and pregnancy outcomes. Reduced incidence of atopic dermatitis in children  If a healthy mother consumes probiotics in the perinatal period, does it affect allergy-related diseases in her child at six years of age? In this study, 415 pregnant women were randomised to consume either probiotic or placebo milk from 36 weeks gestation until 3 months postpartum. The Importance of Infants’ Exposure to Micro-Organisms. Caesarean sections, breast feeding, and the microbiome — The American Microbiome Institute.

Opinion: A Mother’s Microbes. ISTOCK, FAIRYWONGAs parents, we all want what’s best for our kids. However, it’s not always clear what that is. At every turn, we are faced with questions where the answers are not yet known or are unknowable. Asthma could be brought on by maternal diet and lack of bacterial metabolites — The American Microbiome Institute.