CFS/ME is a complex disorder and might have different underlying causes for different people. Here are some thoughts:
* One doctor we have spoken with says that the first step is to heal the gut. Until that happens it is difficult to have impact elsewhere.

* Some people have gluten intolerance or celiac disease without the usual gastrointestinal symptoms. They get much better on a gluten- or grain-free diet. This should be ruled out. POTS can also be related to a gluten-intolerance (but not always).
* Many (70-80%) people have leaky gut, SIBO or IBS. They improve once that condition is treated, partly through diet but it is more involved than that. Keep in mind that a leaky gut can lead to food intolerances and autoimmunity.
* Some people have underlying, chronic infections that need to be dealt with carefully because their immune systems are dysreglulated. Same thing with mold exposure.
* Mitochondrial dysfunction is central to the illness; they can be supported through diet and supplementation while other pieces of the puzzle are dealt with.
* Methylation problems can get in the way of restoring immune function. If this is a problem it can be dealt with through diet and supplementation.
* Lifestyle factors play a role in healing: agressive rest, circadian rhythm entrainment, gradual exercise only once feeling quite well, and social contact and support.

The First ME/CFS Fecal Transplant Study Gets Good Results. About ten studies suggest that the gut flora in ME/CFS is having a bad bloom. 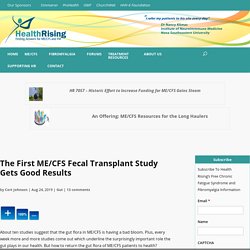 Plus, every week more and more studies come out which underline the surprisingly important role the gut plays in our health. But how to return the gut flora of ME/CFS patients to health? Fecal transplants are the most powerful option, and the results of the first ME/CFS fecal transplant study are out. Diet, Drugs, Herbs and SIBO: One ME/CFS/FM Patient Finds Relief with the Pimental Approach. Small Intestine Bacterial Overgrowth or SIBO is a chronic condition or infection of bacterial overgrowth in the small intestine. Normally the small intestine has low numbers of bacteria and the large intestine has high numbers of bacteria; however, in SIBO bacteria exist in large numbers in the small intestine which interferes with proper digestion and can lead to nutritional deficiencies. Bacteria in the small intestine thrive on carbohydrates and produce a lot of gas and endotoxins that can exceed the liver’s detoxifying capacity, creating a state of toxemia.

SIBO is associated with damage to the lining or membrane of the small intestine, and is also referred to as Leaky Gut Syndrome. The symptoms of SIBO include bloating, gas, constipation and/or diarrhea, abdominal pain, nausea, and heartburn. Systemic symptoms include fatigue, sleep disturbances, headaches, brain fog, joint and muscle pain, and food allergies and sensitivities. Brains on Fire, Swollen Brains, Toxins and Neuroinflammation - by Dr. Mary Ackerley. In a ISEAI presentation, Dr. 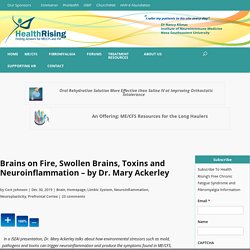 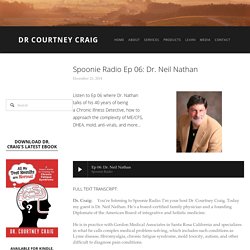 Craig: You’re listening to Spoonie Radio. I’m your host Dr. Courtney Craig. Today my guest is Dr. He is in practice with Gordon Medical Associates in Santa Rosa California and specializes in what he calls complex medical problem-solving, which includes such conditions as Lyme disease, fibromyalgia, chronic fatigue syndrome, mold toxicity, autism, and other difficult to diagnose pain conditions. He’s written several books, the latest of which is called Healing is Possible: New Hope for Chronic Fatigue, Fibromyalgia, Persistent Pain and Other Illness. Welcome to the show Dr. How to Biohack CFS or Fibromyalgia. Step 4: Experiment Armed with large amounts of data, try to pinpoint weak areas that will benefit the most by treatment interventions. 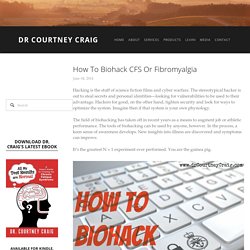 For instance, if you find out you have MTHFR genetic polymorphisms (snps) you can then chose supplements that bypass this defect.

General Mitochondria Information. Dynamic Neural Retraining System - Treatment for Chronic Illness. 3 Tools to Biohack Your Chronic Illness — Dr Courtney Craig. The Inner Balance device plugs into your phone or tablet and a clip attaches to the earlobe with a sensor that measures pulse. 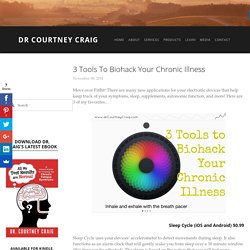 The app takes you through guided breathing exercises with the help of a breathe pacer. The timing of the pacer can be adjusted depending on your breathing capacity. You can practice as long as you like and the data is collected for each session. The EmWave 2 device is a similar gadget but instead offers a standalone option that detects thumb pulse via a handheld device. 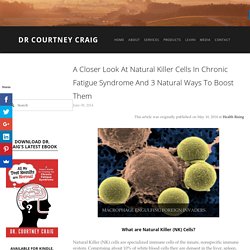 Human studies have shown that PRPs from colostrum induce IFN-y –a robust promoter of NK cell activity. A small placebo-controlled, double-blinded, randomized crossover trial concluded that consumption of colostrum resulted in increased NK cell release from bone marrow as well as homing of NK cells into tissues (4). Acupressure Mats for Better Sleep in Fibromyalgia and Chronic Fatigue Syndrome. 5 Natural Antiviral Strategies — Dr Courtney Craig. It is still unclear if ME/CFS is defined by a post-viral epigenetic trigger, an undiscovered mystery virus, or if there are genetic susceptibilities in place that make patients immunocompromised. 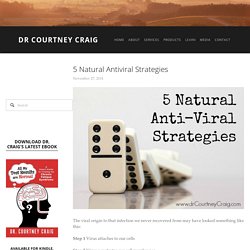 In all likelihood more than one of these reasons, if not all, are at play in this complicated illness. Anti-viral drugs are the mainstay of ME/CFS treatment, yet the results are not as promising as one would hope. I believe this is due to a couple factors: Many anti-viral drugs are non specific to virusesIf a virus mutates, the anti-viral drug will no longer be effectiveViruses can form a protective phospholipid layer around itselfViruses may hide deep in tissues where medications or immune cells cannot access Instead of giving up when the anti-viral drug stops working, there are several strategies patients can use to intervene in blocking viral penetration and replication (1).

Dr. Martin Lerner's Treatment Protocol for ME/CFS - CFS Treatment Guide. Treating acute M.E. The information contained in most of HHH is aimed at those that have been ill with M.E. for years or even decades. 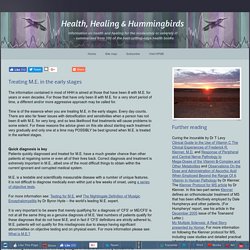 For those that have only been ill with M.E. for a very short period of time, a different and/or more aggressive approach may be called for. Time is of the essence when you are treating M.E. in the early stages. Every day counts. 4 Steps to Overcome Chronic Fatigue Syndrome. Chronic Fatigue Syndrome is a chronic illness characterized by extreme fatigue that lasts for more than six months. 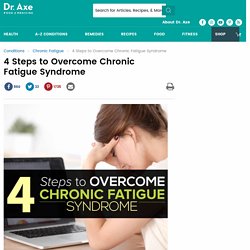 This fatigue cannot be explained away by an underlying medical condition. In fact, one of the disease’s principle challenges is that it’s impossible to diagnose with laboratory tests. However, some professionals believe it is closely related to adrenal fatigue or system wide inflammation of the body. S.H.I.N.E.® Protocol—A Comprehensive Approach to Optimizing Energy. A half-century of work by Professor Janet Travell, the White House physician for Presidents Kennedy and Johnson, and author of the Trigger Point Manual showed that the same problems causing hypothalamic suppression resulted in muscles getting stuck in the shortened position. 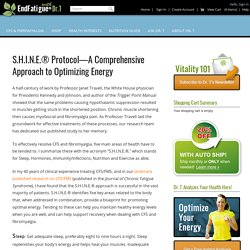 Chronic muscle shortening then causes myofascial and fibromyalgia pain. As Professor Travell laid the groundwork for effective treatments of these processes, our research team has dedicated our published study to her memory. To effectively resolve CFS and fibromyalgia, five main areas of health have to be tended to. I summarize these with the acronym "S.H.I.N.E. ®," which stands for Sleep, Hormones, Immunity/Infections, Nutrition and Exercise as able. Treatments & Therapies – UMDF. Many patients, including young children or mentally impaired persons have already “self-adjusted” their diet, because they know what foods their body seem to tolerate. The points below are not meant to be suggested therapies for all patients with OXPHOS disorders, and some of the points are dangerous for patients with other disorders. Do not make any of these dietary changes without consulting a physician.

A dietitian experienced in metabolic disorders may be helpful. Avoid fasting. This is perhaps the most important part of the treatment for most people with metabolic disorders. In some patients, an unintended fast resulting from an illness that causes vomiting or loss of appetite (like the flu) should be hospitalized to ensure continuous nutrition (intravenous glucose, for example).

Treatment Protocols for Chronic Fatigue Syndrome & Myalgic Encephalomyelitis - ProHealth. Finding The Right Treatment For Chronic Fatigue Syndrome. I spoke to one of our regular readers two weeks ago, who also happens to be a CFS/ME sufferer. Greg said to me: “I look forward to the potential treatments article for CFS/ME, which I hope will not be too much of a minefield, as none of them come without a great deal of controversy.” “Minefield” is a bit of an understatement, dear Greg. My Protocol to Cure Chronic Fatigue and Fatigue After Meals - Selfhacked. Chronic Fatigue Syndrome (CFS) Chronic fatigue syndrome (CFS) is a complicated condition characterized by profound fatigue that persists for more than six months. It is often accompanied by cognitive difficulties, muscle and joint pain, depression, poor sleep quality, or other nonspecific symptoms. Many people with CFS have difficulty working, attending school, exercising, and carrying out daily activities. Chronic Fatigue Syndrome Neuroinflammation: Peeling the Onion - Wellness Resources.

Hyperbaric Oxygen Therapy (HBOT) to Overcome Chronic Fatigue, Recover Twice as Fast, Fix Erectile Dysfunction, Heal Brain Injuries and More with Scott Sherr MD - The Energy Blueprint. Dangers of High Leptin, How to Decrease It, Its Role in Inflammation & Weight Gain. If you’re overweight OR underweight OR have CFS, CIRS, autoimmunity or chronic inflammation, then leptin is relevant to your health. Leptin is not what your doctor would usually test, even though it can tell you a lot about your health. However, you can request it from your doctor and plug in your test results into Lab Test Analyzer, and you will find all the information you need about your leptin values, such as if your levels are balanced. And if they are not, it will tell you how to get there, using evidence-based lifestyle, diet, and supplement tips.

This post will tie several threads together that I’ve been discussing for a while and cause some brain sparks to fly. A future post will be about how to combat the harmful effects of leptin and how to reverse leptin resistance. Leptin causes weight loss. Leptin levels increase exponentially, not linearly, with fat mass. Treatment and management of chronic fatigue syndrome/myalgic encephalomyelitis: all roads lead to Rome.