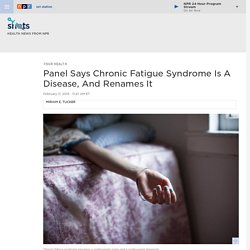 Erica Shires/Corbis hide caption toggle caption Erica Shires/Corbis Chronic fatigue syndrome has been a controversial name and a controversial diagnosis. The mysterious and complicated illness that has been called chronic fatigue syndrome has a new definition and a new name: systemic exertion intolerance disease, or SEID for short. The name change is big news because many patients and experts in the field hate the name chronic fatigue syndrome; they feel that it trivializes the condition. The condition, which can render people housebound or bedridden and unable to work or go to school, is believed to affect between 860,000 and 2.5 million Americans. 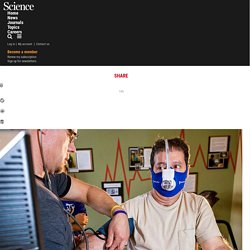 The unwieldy new moniker: systemic exertion intolerance disease, or SEID. In a report released today, the committee also suggests a new set of diagnostic criteria for SEID. After reviewing more than 9000 scientific studies, hearing testimony from experts, and soliciting input from the public, the committee concluded that “the name ‘chronic fatigue syndrome’ has done a disservice to many patients,” calling it “stigmatizing and trivializing.” Myalgic encephalomyelitis (ME), they noted, “does not accurately describe the major features of the disease.” At least 20 sets of diagnostic criteria exist, the committee noted, which has confused patients, clinicians, and their families, as well as researchers studying the disease. Systemic exertion intolerance disease does not exactly roll off the tongue. What happens when you have a disease doctors can't diagnose. Free Six-Part Online ME/CFS / FM Video Series From the Bateman Horne Center Begins. A Focus on Education Dr.

Bateman’s passion is education. The Bateman Horne Center in Salt Lake City is much more than one of the very few treatment clinics that focus on chronic fatigue syndrome (ME/CFS) and fibromyalgia (FM). Its extensive video library of educational talks – containing talks on everything from sexual health to navigating the school system to orthostatic intolerance to sleep and fibromyalgia – is unsurpassed. A Primer on Chronic Fatigue Syndrome — Dr Courtney Craig. Is it in the brain? 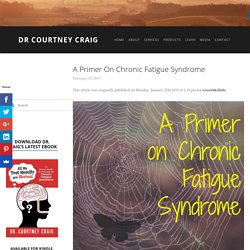 Advanced imaging studies in ME/CFS found widespread neuroinflammation in several key brain regions including the cingulate cortex, hippocampus, amygdala, thalamus, midbrain, and pons. Inflammation in these areas was 45%-199% times higher in ME/CFS patients than in healthy controls. Interestingly, the degree of neuroinflammation directly correlated with symptom severity (9). Larger studies are underway to determine which inflammatory marker is driving the vicious cycle of inflammation. 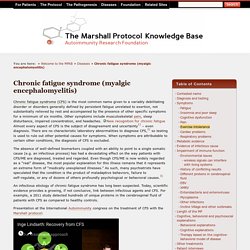 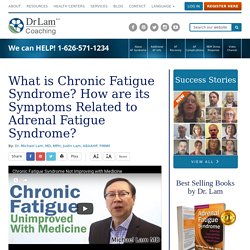 Michael Lam, MD, MPH; Justin Lam, ABAAHP, FMNM Chronic Fatigue Syndrome Unimproved with Medicine Being offered options for Chronic Fatigue Syndrome but not responding to therapy and medicine can be extremely frustrating as you try to function day to day with no answers. Having a remedy should help you improve by being able to target the symptoms and triggers. Unfortunately, the true cause is still unknown, and it is likely to be multi-factorial. Many sufferers who have been diagnosed with chronic fatigue may therefore have very different underlying issues. Things You Didn't Know About Chronic Fatigue Syndrome.

Sex, Autoimmunity and Chronic Fatigue Syndrome ... or Why More Women Than Men Get ME/CFS - Health Rising. “Creating a scientific culture that compels consideration of sex in shaping the immune response is essential to a comprehensive understanding of health and disease.” 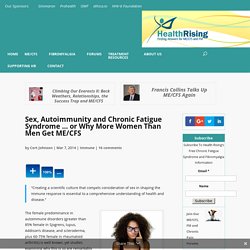 Why are women so much more likely to come down with autoimmune disorders and ME/CFS and FM? The female predominance in autoimmune disorders (greater than 85% female in Sjogrens, lupus, Addison’s disease, and scleroderma, plus 60-75% female in rheumatoid arthritis) is well known, yet studies examining why this is so are remarkably rare. The researchers in this review article suggest it’s about time to look at this pattern more closely. The authors didn’t note an equally strong female bias in fibromyalgia or chronic fatigue syndrome or in cardiovascular disorders such as postural orthostatic tachycardia syndrome (POTS) and orthostatic hypotension (OH) which also appear to be autoimmune in nature. 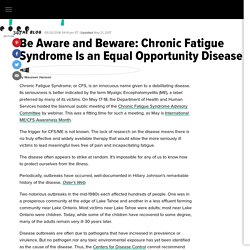 Its seriousness is better indicated by the term Myalgic Encephalomyelitis (ME), a label preferred by many of its victims. On May 17-18, the Department of Health and Human Services hosted the biannual public meeting of the Chronic Fatigue Syndrome Advisory Committee by webinar. This was a fitting time for such a meeting, as May is International ME/CFS Awareness Month. The trigger for CFS/ME is not known. The lack of research on the disease means there is no truly effective and widely available therapy that would allow the more seriously ill victims to lead meaningful lives free of pain and incapacitating fatigue. 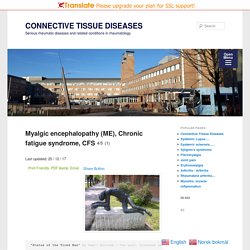 Licensed under Public Domain via Wikimedia Commons - Synonyms: SFS / ME, Myalgic Encephalopathy (ME). Idiopathic Chronic Fatigue Syndrome (CFS), neurostasis. Invalidating, effort-related exhaustion with duration of at least 4-6 months when other illness is excluded. This is not an inflammatory connective tissue diseases or Vasculitis. Discussed and not proven. Vulnerability (Genetic, Environment)Triggers (infection, injury, mental strain)Maintenance FactorsOften rapid onset, in some cases after upper respiratory infectionFeeling of fever, but without measurable abnormal temperatureInvalidating fatigueImpaired memory and concentration (Cognitive difficulty)Sore throat and sore lymph nodesMuskel- og joint painIncreased sensitivity to light, smell and soundNumbnessExhaustion (more than expected) after physical or mental exertions Diagnose based on symptoms and exclusion of other illnesses. Myalgic Encephalomyelitis - NORD (National Organization for Rare Disorders) 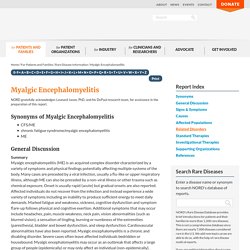 L., Zinn, M. A., & Jason, L. Treating Chronic Fatigue Syndrome with Cognitive Behavioral Therapy and Graded Exercise Therapy: How the PACE Trial Got It Wrong. Chronic Fatigue Syndrome: A Biological Approach. Quixotic: My M.E. Blog: List of Low Energy Activities for People with ME/CFS. As some of my recent posts reflect, I've been thinking about how to replace the activities I formerly enjoyed with new, lower-energy activities. 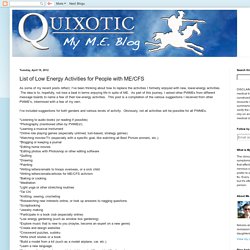 The idea is to, hopefully, not lose a beat in terms enjoying life in spite of ME. As part of this journey, I asked other PWMEs from different message boards to name a few of their low-energy activities. This post is a compilation of the various suggestions I received from other PWME's, intermixed with a few of my own. I've included suggestions for both genders and various levels of activity. Obviously, not all activities will be possible for all PWMEs. *Listening to audio books (or reading if possible) *Photography (mentioned often by PWMEs!) *Blogging or keeping a journal *Editing home movies *Editing photos with Photoshop or other editing software *Quilting I appreciate all the suggestions I received, and I welcome more.