Common elements in the diet suggestions for CFS/ME are:
* high nutrient density
* eliminating potential allergens (gluten, dairy and others)
* anti-inflammatory foods with lots of vegetables
* unprocessed and whole foods

Food Sensitivities and CFS/ME. Hydration and Brain Fog. Healing Chronic Illness with Nutritional Balancing: Darden's ME/CFS and FM Story. How nutrient deficiencies cause fatigue (and the most important minerals and vitamins for fatigue) with Dr. Chris Masterjohn - The Energy Blueprint. Should We All Go Gluten-Free? 5 Common Misconceptions about Gluten and Gluten-free Diets: #1 I got tested for that and I don’t have it. 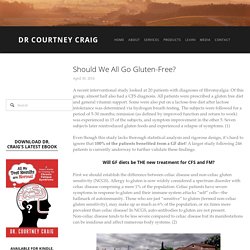 Testing for celiac disease and non-celiac disease has been notoriously inaccurate. Studies have shown that only 50% of celiac patients test positive for the HLA DQ2 or DQ8 gene. The gold standard diagnostic test for celiac disease is intestinal biopsy to detect atrophy of the gut tissue. This test, though accurate, is inadequate in making early diagnoses. Want accurate testing? #2 I don’t have gastrointestinal symptoms so gluten can’t be a problem for me. You may be surprised to learn that up to 50% of patients with celiac disease lack gastrointestinal symptoms! #3 I tried a GF diet and I didn’t notice any difference.

To truly assess your body’s reaction to gluten, a trial period of 30-60 days completely free of gluten containing foods will be necessary (no cheating!). #4 I read going Gluten Free is unhealthy. Need help switching to a GF diet? Dr. Why people with CFS/ME should avoid sugar. There is a tonne of information about the big bad nasty sugar, but did you know that people suffering with CFS/ME can actually improve their symptoms substantially by avoiding it? 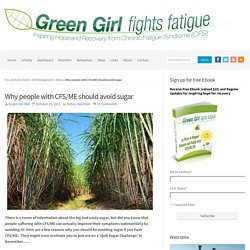 Here are a few reasons why you should be avoiding sugar if you have CFS/ME. They might even motivate you to join me on a ‘Quit Sugar Challenge’ in November….. Low Blood Sugar (hypoglycemia) Sugar can mess with your blood sugar levels, with levels rising after sugar and plummeting shortly after. With low blood sugar you can get light headed, headaches and fatigue. Top 3 Foods to Avoid with a Diagnosis of CFS or Fibro — Dr Courtney Craig. Cow's milk protein intolerance in adolescents and young adults with chronic fatigue syndrome - Rowe - 2016 - Acta Paediatrica. Chronic Fatigue Syndrome: The Nutritional Approach. View text/printer form Chronic Fatigue Syndrome: The Nutritional Approach by Ken Babal, Certified Nutritionalist Headlines herald chronic fatigue syndrome (CFS) as the malaise of a generation and life. 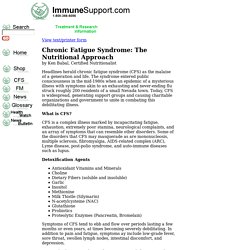 The syndrome entered public consciousness in the mid-1980s when an epidemic of a mysterious illness with symptoms akin to an exhausting and never-ending flu struck roughly 200 residents of a small Nevada town. Today, CFS is widespread, generating support groups and causing charitable organizations and government to unite in combating this debilitating illness. What is CFS? CFS is a complex illness marked by incapacitating fatigue, exhaustion, extremely poor stamina, neurological complaints, and an array of symptoms that can resemble other disorders. Detoxification Agents. Foods to eat, foods to avoid. Healthy foods only stay healthy foods if they are handled right. 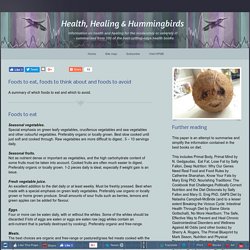 Here are some ways to avoid making a healthy food into an unhealthy food through non-ideal food choice and preparation: Fruit and vegetables * Choose organic where possible but note that produce fresh from your own garden is best, then fresh, locally sourced and organic, then fresh and locally sourced. Case Study by Niki Gratrix - The Optimum Health Clinic. Case Study by Niki Gratrix Director of Nutrition The Optimum Health Clinic 17th December 2008 University of Bedfordshire. 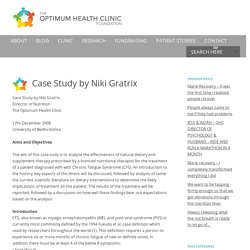 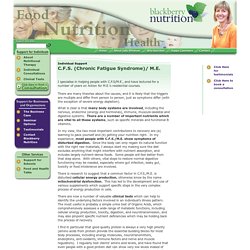 There are a number of important nutrients which are vital to all these systems, such as specific minerals and functional B vitamins. In my view, the two most important contributions to recovery are (a) learning to pace yourself and (b) getting your nutrition right. In my experience, most people with C.F.S. Special Dietary Considerations for Severe ME/CFS Patients: Protein. Dietary protein requirements for the average person are about 50g/day per the U.S. 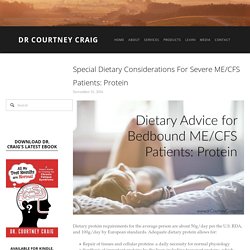 RDA, and 100g/day by European standards. Adequate dietary protein allows for: Repair of tissues and cellular proteins: a daily necessity for normal physiologySynthesis of important proteins by the liver: including transport proteins, which move hormones, minerals, and other important components through the bloodImmune cell regeneration: synthesis of new immunoglobulins and antibodiesBlood: generation of the blood protein hemoglobin which carries oxygen in the blood In chronic illness, protein demands increase due to the body being under constant physiological stress. Stress hormones such as epinephrine and norepinephrine, degrade existing proteins and inhibit creation of new ones.

What this looks like: 1. 2. 3. 4. In addition to protein breakdown due to chronic illness itself, severely ill patients have the added concern of accelerated muscle loss, a process known as sarcopenia. Supplements 101: Carnitine. Polyphenols: Essential Nutrition for ME/CFS. NADH: Benefits, Side Effects, Dosage, and Interactions. NADH, or reduced nicotinamide adenine dinucleotide, is made in your body from niacin, a type of B vitamin. 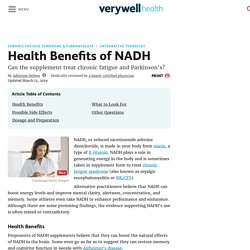 NADH plays a role in generating energy in the body and is sometimes taken in supplement form to treat chronic fatigue syndrome (also known as myalgic encephalomyelitis or ME/CFS). Alternative practitioners believe that NADH can boost energy levels and improve mental clarity, alertness, concentration, and memory. Some athletes even take NADH to enhance performance and endurance. Although there are some promising findings, the evidence supporting NADH's use is often mixed or contradictory. Health Benefits Proponents of NADH supplements believe that they can boost the natural effects of NADH in the brain.

There are even ongoing investigations as to whether NADH, delivered by injection or intravenously (into a vein), can slow the progression of Parkinson's disease. Omega-3 for Fibromyalgia and Chronic Fatigue Syndrome. Overview Omega-3 fatty acids are common nutritional supplements often taken in the form of fish oil or flaxseed oil. 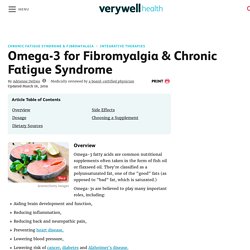 They're classified as a polyunsaturated fat, one of the "good" fats (as opposed to "bad" fat, which is saturated.) Omega-3s are believed to play many important roles, including: Turmeric for Fibromyalgia and Chronic Fatigue Syndrome. Turmeric is a bright yellow spice that's frequently found in curry-spice blends. 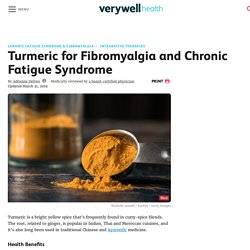 The root, related to ginger, is popular in Indian, Thai and Moroccan cuisines, and it's also long been used in traditional Chinese and Ayurvedic medicine. Health Benefits Turmeric contains a compound called curcumin, which research suggests may offer several health benefits that could help alleviate symptoms of fibromyalgia and chronic fatigue syndrome. Up until now, though, no studies have examined it specifically for these conditions. While we do have some research on turmeric/curcumin, more studies need to be done to nail down exactly what it can do for us. Lithium's Role in Chronic Fatigue Syndrome — Dr Courtney Craig. The trace metal lithum is oft overlooked in terms of nutritional support.

Although not abundant compared to other metals like iron and zinc, lithium plays a key role in several biochemical mechanisms pertinent to chronic illnesses such as fibromyalgia and chronic fatigue syndrome. Lithium is highly concentrated in the diet in eggs, dairy products, beets, and thyme. D-Ribose for Fibromyalgia and Chronic Fatigue Syndrome. D-ribose is a supplement that's sometimes recommended as a treatment for people with fibromyalgia and chronic fatigue syndrome. Also called ribose or Beta-D-ribofuranose, it's a type of sugar that your body produces naturally and is readily available in supplement form. D-ribose plays several important roles in your body, such as: Helping produce energy in the form of ATP (adenosine triphosphate)Serving as a building block of the genetic material RNA (ribonucleic acid)Helping increase your muscle energy As with most supplements, we don't have enough high-quality research to draw a lot of conclusions about it as a treatment for these conditions.

Valerian for Fibromyalgia and Chronic Fatigue Syndrome. Tea for Fibromyalgia and Chronic Fatigue Syndrome. Tea is one of the most popular drinks in the world, but it's way down on the list in the U.S., coming in behind coffee and soda. In the past few years, however, studies suggesting health benefits of tea have certainly raised its profile and popularity here. Behind the Hype So is it all hype, or is there something to it? According to research, it looks like tea has several things to offer, both for the public in general and for those of us with fibromyalgia or chronic fatigue syndrome. Much of the research is in its early stages and some results are contradictory, but a picture is emerging. Tea contains two things that appear to offer health benefits: polyphenols and theanine. Polyphenols Polyphenols have gotten the lion's share of the attention when it comes to tea's recent publicity. Offer protection from coronary heart diseaseProtect against strokeImprove blood vessel dilationProtect against numerous types of cancerHelp regulate blood sugar Polyphenols are a type of antioxidant.

Lysine for Fibromyalgia and Chronic Fatigue Syndrome. Lysine, also called L-lysine, is an essential amino acid. "Essential" means that your body doesn't produce it, so you get it through diet and supplementation. While more research needs to be done to confirm these findings, some studies have linked lysine to: Suppression of herpes virusesIncreasing calcium absorption, which may be helpful in osteoporosisLowering glucose levelsAlleviating migrainesLessening anxietyAiding in wound and fracture healing A look at the above list of possible effects illustrates why.

Theanine for Fibromyalgia and Chronic Fatigue Syndrome. Theanine is an antioxidant that's found naturally in tea leaves. So far, it hasn't been studied specifically for fibromyalgia and chronic fatigue syndrome, but we do have studies suggesting that it may be effective in treating many symptoms of these conditions. Research shows theanine may: Increase alertnessBoost energyRelieve anxietyAid relaxation without causing drowsinessProtect brain cellsIncrease the availability dopamine and norepinephrineLower activity of the neurotransmitter glutamate, which can overstimulate brain cellsBalance glutathione levelsBoost production of T cells by your immune systemPrevent memory impairment due to improper blood flow (ischemia) in the brain Theanine may also lower blood pressure and bad cholesterol, increase anti-tumor activity, and help regulate the sleep-wake cycle.

Chronic fatigue syndrome: oxidative stress and dietary modifications. - PubMed - NCBI. Dietary and nutrition interventions for the therapeutic treatment of chronic fatigue syndrome/myalgi. B12 for Fibromyalgia and Chronic Fatigue Syndrome. B vitamins are essential for energy production, protein metabolism, red blood cell formation, and central nervous system maintenance. B vitamins are water soluble, meaning that your body uses what it can and eliminates the rest through urine. B12 is a common supplement for increasing energy. It's available in several forms, including injections, tablets, and sublingual (under the tongue) forms. A few (but limited) studies suggest that low B12 levels may be involved in fibromyalgia and chronic fatigue syndrome. If so, it's possible that they are, at least in part, responsible for the low energy levels typical of both conditions. Research on B12 supplements for these illness has just begun, but what little we have is promising.