This section is for posts on this topic, however, there are many examples in the Fake News and Exaggeration section and others.

But we were only off by a factor of 10. In 2018, with Hurricane Florence bearing down on the Carolinas, a group of scientists cranked up their supercomputer and announced that global warming had caused the hurricane to carry 50 percent more rain than it otherwise would have. 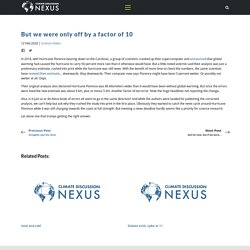 But a little-noted asterisk said their analysis was just a preliminary estimate, rushed into print while the hurricane was still news. With the benefit of more time to check the numbers, the same scientists have revised their estimate... downwards. Way downwards. Their computer now says Florence might have been 5 percent wetter. Or possibly not wetter at all. UK Getting Wilder, Wetter Weather? Data Says Not. “The link between climate change and Britain’s winter storms”–(Clue–There is not one) Climate change now detectable from any single day of weather at global scale. Nature Climate Change volume 10, pages35–41(2020)Cite this article Abstract For generations, climate scientists have educated the public that ‘weather is not climate’, and climate change has been framed as the change in the distribution of weather that slowly emerges from large variability over decades1,2,3,4,5,6,7. 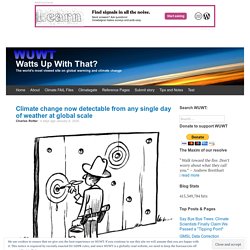 However, weather when considered globally is now in uncharted territory. Here we show that on the basis of a single day of globally observed temperature and moisture, we detect the fingerprint of externally driven climate change, and conclude that Earth as a whole is warming. Our detection approach invokes statistical learning and climate model simulations to encapsulate the relationship between spatial patterns of daily temperature and humidity, and key climate change metrics such as annual global mean temperature or Earth’s energy imbalance. The rest is paywalled. Three Rules For Accepting Climate “Event Attribution” Studies. In September 2018, as Hurricane Florence was heading towards a landfall in North Carolina, a team of researchers announced that the storm would be 80 kilometers larger and drop 50% more rainfall due to “human induced climate change.” 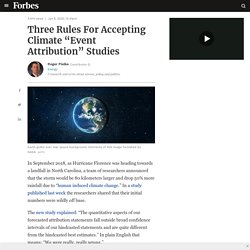 In a study published last week the researchers shared that their initial numbers were wildly off base. The new study explained: “The quantitative aspects of our forecasted attribution statements fall outside broad confidence intervals of our hindcasted statements and are quite different from the hindcasted best estimates.” In plain English that means: “We were really, really wrong.” Breaking Bad In Climate Science. The American Meteorological Society has taken climate superstition to a new level. 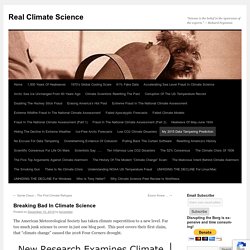 Far too much junk science to cover in just one blog post. Why Climate Advocates Need To Stop Hyping Extreme Weather. By Paul Homewood A useful recap from Roger Pielke Jr at Forbes, (and more shenanigans from the Lancet!) 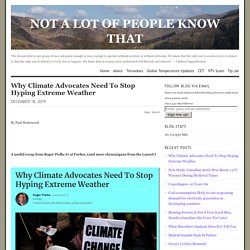 Venice flood due to climate change – only it wasn't. Published on November 15, 2019 Written by Andy Rowlands image source: thenewdaily.com.au On November 13th, the BBC website carried an article about the flooding in Venice, quoting the Mayor Luigi Brugnaro. 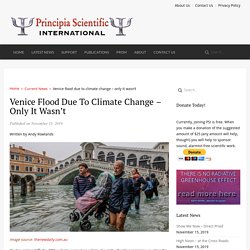 Cuomo’s Fake Claims About Extreme Rainfall. Hurricane Dorian “Man-Made” According to Emory University Professor. Guest “are you fracking kidding me?” 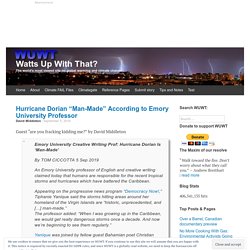 By David Middleton Emory University Creative Writing Prof: Hurricane Dorian Is ‘Man-Made’By TOM CICCOTTA 5 Sep 2019An Emory University professor of English and creative writing claimed today that humans are responsible for the recent tropical storms and hurricanes which have battered the Caribbean.Appearing on the progressive news program “Democracy Now! ,” Tiphanie Yanique said the storms hitting areas around her homeland of the Virgin Islands are “historic, unprecedented, and […] man-made.”The professor added: “When I was growing up in the Caribbean, we would get really dangerous storms once a decade. Global Warming Made Dorian Stronger, Say Discredited Scientists. 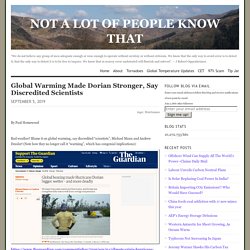 Blame it on global warming, say discredited “scientists”, Michael Mann and Andrew Dessler! State AG’s and activists trying to forge attribution link between weather and climate. From Climate Litigation Watch, the war to link weather and climate from a legal standpoint is about to heat up: Activist AG Admission: Washington State AG Declined Climate Nuisance Suit Because of Insufficiency of ‘Attribution’ Claims Newly revealed emails, wrongly hidden from public by OAG, further suggest origin of renewed “Attribution” push CLW readers are aware of the new, plaintiffs’ bar-driven push to claim an ability to attribute climate change — all the way down to responsibility for individual storms, weather apparently is climate when it’s the right kind of weather — just as the first AG #ExxonKnew trial approaches, later this month. 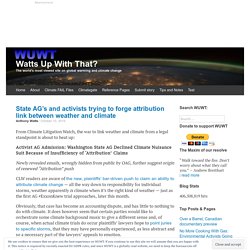 Obviously, that case has become an accounting dispute, and has little to nothing to do with climate. But we also have recently learned what happened next: the lawyers got the activists working on a more convincing stab at claiming attribution. Full story here (worth a read) Climate change: Global impacts ‘accelerating’ – WMO. 'Polar Vortex' NOT Proof of Global Warming. Published on January 25, 2019 Written by Michael Bastasch The New York Times is pushing the theory that cold snaps are becoming more frequent because of global warming. 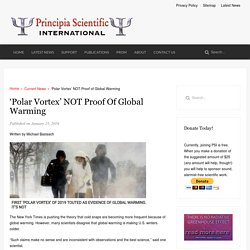 However, many scientists disagree that global warming is making U.S. winters colder. “Such claims make no sense and are inconsistent with observations and the best science,” said one scientist. Goremongering and Mannhandling the reality of winter weather ‘bombs’ This happened a couple of days ago, where Gore quotes failed climate science promoter (note Dr. Mann that I didn’t say carnival barker as is your favorite slur) and while many rushed to cover it right away, because of the sheer ridiculousness of it, I wanted to wait and see what the fallout was. There’s plenty. Al gore Tweeted this: You can read Mann’s reasoning here.

The folly of NOVA’s “Rise of the Superstorms” by PBS. Claim: CO2 Causes Extreme Weather Even Without Global Warming. Guest essay by Eric Worrall A new study by Professor Myles Allen, David Karoly and others claims that even if CO2 does not cause significant global warming, we still have to cap CO2 to prevent a “direct CO2 effect” from messing up the weather. Rising CO2 may increase dangerous weather extremes, whatever happens to global temperaturesPress release issued: 11 June 2018New research from the University of Oxford and collaborators at several other institutions, including the University of Bristol, provides compelling evidence that meeting the global warming target of 1.5°C may not be enough to limit the damage caused by extreme weather.The paper, published today in Nature Climate Change, demonstrates that higher atmospheric CO2 concentrations directly increase temperature and rainfall extremes, meaning there could be dangerous changes in these extremes even if the global mean temperature rise remains within 1.5°C.

Extreme Cold AND Heat Blamed On Warming. When the eastern U.S. plunged into a deep freeze last winter, some scientists blamed Arctic ice melt from man-made global warming for the anomalously cold weather in the eastern part of the country. Now, those same scientists are blaming Arctic warming for weakening the jet stream and exacerbating extreme summer weather across the northern hemisphere. Global warming makes cold spells and heat waves more extreme, they contend. Penn State University climate scientist Michael Mann is out telling media the heat waves, wildfires, droughts, and floods are made worse because global warming is making the jet stream less stable.

“Climate change is literally making the jet stream more wild,” Mann told PBS NewsHour on Monday. “It undulates more, so you get those weather extremes, and it’s causing the jet stream to slow down, so those extreme weather events stick around.” “And that’s when you get unprecedented damage and threat,” Mann said. Mann is not the only one perpetuating this theory.

Climate change attribution games. The recent extreme cold snap brought forth the usual claims from climate change alarmists that humans are causing bad weather. One is tempted to simply laugh this stuff off, but these attribution studies are proliferating. They are in fact the latest phase of alarmism, so they are worthy of serious criticism. For example, the evergreen American Meteorological Society recently released its sixth annual report that claims to document human influence on extreme weather events. This year, for the first time, they are claiming that some of these weather events could not have happened without human interference. Their absurdity escapes them.