California has been experiencing devastating wildfires. Climate change has been blamed. The causes are more complex--regulatory and forest mismanagement, environmental advocacy preventing forest management, increased population living in forested areas, an increase in arson and more.

They Know How to Prevent Megafires. Why Won’t Anybody Listen? « JoNova. The sitation in California is just like the one in Australia Tim Ingalsbee has been fighting fires or trying to prevent them since 1980. 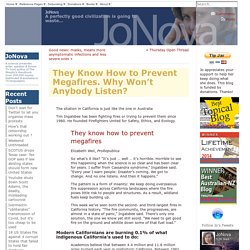 He founded Firefighters United for Safety, Ethics, and Ecology. They know how to prevent megafires Elizabeth Weil, ProRepublica So what’s it like? The pattern is a form of insanity: We keep doing overzealous fire suppression across California landscapes where the fire poses little risk to people and structures. California Has Always Had Fires, Environmentalism Makes Them Worse. By Paul Homewood [Editor’s Note – This post appeared earlier without any body! 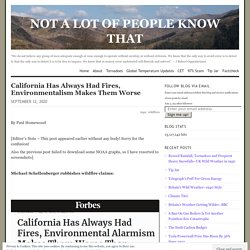 Sorry for the confusion! Also the previous post failed to download some NOAA graphs, so I have resorted to screenshots] Wildfires offsetting California’s expensive cap-and-trade emissions cuts. Reposted from Junk Science California’s failure to manage its forests so as to limit wildfires offset much if not all of the state’s expensive efforts to reduce its greenhouse emissions. 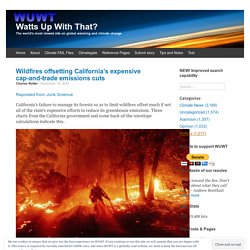 Three charts from the California government and some back-of-the-envelope calculations indicate this. First, here is the burn acreage for 2000-2019. Note that in 2019, for example, wildfires consumed 280,000 acres of California’s forests. Next, here are the CO2 emissions caused by those wildfires. Now, so far in 2020, about 3.4 million acres of California forests have burned. Now, here is the chart of California emission reductions between 2000-2017 (the latest available from the state). Let’s assume that the state is still around the same level of emissions as 2017.

How environmentalists destroyed California’s forests. I believe it was John Fremont who once exclaimed in astonishment that one could ride a horse at full gallop in the Forests of the Sierras in California. 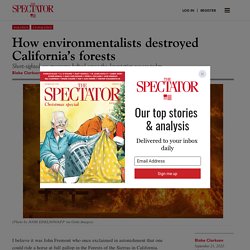 Well, one can do that again now — not among the towering conifers, but over the ashes. Right now I’m seeing the mountains I grew up in — where I went to school, where I hung out, camped, backpacked, boated, cheated death and generally formed the foundation of my character — burning down. It makes me sad and angry. This didn’t have to happen. New York Times debunks climate-caused California wildfires – JunkScience.com. California can either manage its forests better or watch them burn for another 200 years — according to the New York Times. 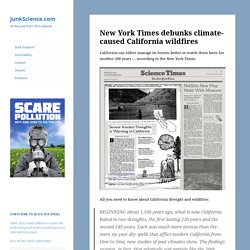 All you need to know about California drought and wildfires: BEGINNING about 1,100 years ago, what is now California baked in two droughts, the first lasting 220 years and the second 140 years. Each was much more intense than the mere six-year dry spells that afflict modern California from time to time, new studies of past climates show. The findings suggest, in fact, that relatively wet periods like the 20th century have been the exception rather than the rule in California for at least the last 3,500 years, and that mega-droughts are likely to recur. As there were no SUVs or coal-fired power plants 1,100 years ago, California may want to start thinking now about some serious forest management before nature takes her own devastating course. The full text of the NYTimes article is below. Dr. Preventing future forest infernos. Getting past the climate scapegoat, and taking steps that could actually make a difference Paul Driessen The 2020 fire season is nearing its end. 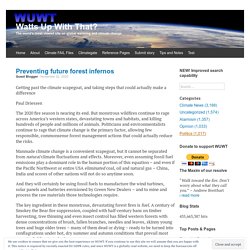 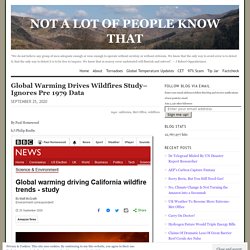 Their analysis finds an "unequivocal and pervasive" role for global heating in boosting the conditions for fire. California now has greater exposure to fire risks than before humans started altering the climate, the authors say. Land management issues, touted by President Donald Trump as a key cause, can’t by themselves explain the recent infernos. The new review covers more than 100 studies published since 2013, and shows that extreme fires occur when natural variability in the climate is superimposed on increasingly warm and dry background conditions resulting from global warming. Global Warming Drives Wildfires Study–Ignores Pre 1979 Data. Reposted from Not A Lot of People Know That By Paul Homewood. 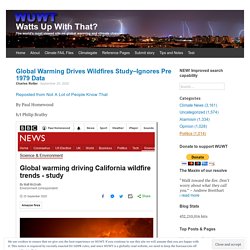 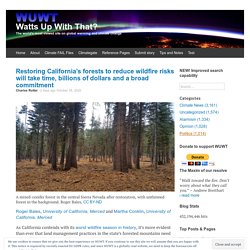 Many of California’s 33 million acres of forests face widespread threats stemming from past management choices. Today the U.S. Forest Service estimates that of the 20 million acres it manages in California, 6-9 million acres need to be restored. Forest restoration basically means removing the less fire-resistant smaller trees and returning to a forest with larger trees that are widely spaced. We are engineers who work on many natural resource challenges, including forest management. But there are major bottlenecks. However, some of these groups are forming local partnerships to work with land managers and develop innovative financing strategies. Dry, crowded forests The benefits of restoration.

Minimizing California Wildfires. What’s Natural Guest post by Jim Steele How do we focus our resources to minimize the devastation caused by California’s wildfires? 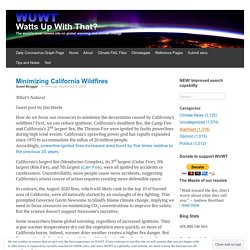 First, we can reduce ignitions. Gizmodo Blames Natural Gas for California’s Rolling Black Outs. Guest “too fracking funny” by David Middleton CLIMATE CHANGERenewable Energy Isn’t to Blame for California’s BlackoutsDharna NoorWednesdayOn Friday and Saturday, hundreds of thousands of Californians had their power cut for a spurt in the evening. And more of this could be in store in the coming days as record breaking heat beats down on the state and wildfires burn out of control.State officials have said the need for the shutoffs shows the inadequacies of renewable power. On Monday, Stephen Berberich, president of California’s Independent System Operator (CAISO), the agency which made the call to enact the rolling shutoffs, blamed the California Public Utilities Commission for failing to ensure adequate power capacity on hot nights after the sun sets.

That’s when electricity generated by the state’s solar panels drops to zero but demand for air conditioning remains high. Before I move on to the natural gas nonsense, this bit is irresistible: On to the natural gas nonsense Mr. California Wildfires and the Lightning Siege: How Unusual Is It? Reposted from the Cliff Mass Weather Blog California is burning and smoke has covered the northern half of the state and is spreading across the U.S. Most of the fires were started by a huge “lightning siege” that started on August 15th.

How unusual was this massive lightning event? That question will be answered below. Smoke situation this morningThe situation this morning was extraordinary. Stop Blaming Climate Change For California’s Fires–Michael Schellenberger. By Paul Homewood Michael Schellenberger counter attacks over wildfires: Fires have burned 1.3 million acres of California’s forests over the last month. That’s one million acres more than burned last year, and is an unusually high number for this early in the fire season. California political leaders including Governor Gavin Newsom and Senator Kamala Harris, the Democratic vice presidential candidate, blame climate change. Why Worse Wildfires? Part 1. What’s Natural? Guest post by Jim Steele There are several theories trying to explain the recent uptick in wildfires throughout the western USA.

Guest post by Jim Steele, As one wildfire expert wrote, “Predicting future fire regimes is not rocket science; it is far more complicated than that.” But regardless of accuracy, most people are attracted to very simple narratives such as: more CO2 causes global warming causes more fires. Accordingly in the summer of 2019, CNN trumpeted the headline California wildfires burn 500% more land because of climate change. They claimed, “the cause of the increase is simple. Hotter temperatures cause drier land, which causes a parched atmosphere.” If Williams and Abatzoglou were not so focused on forcing a global warming connection, they would have at least raised the question, ‘why did much bigger fires happen during cooler decades?’ Bad analyses cause bad remedies, and here is why Williams and Abatzoglou’s last paper exemplifies a bad scientific analysis.

Similarly, CNN journalists were content to simply blame climate change. Controlling the spread of cheat grass is urgently needed. Weaponization of wildfires reaches fever pitch. On Oct 22, after covering this the Friday before on our videos at Weatherbell, I tweeted this out: California: maybe prescribed burns once every 500 years are not enough? California’s devastating Kincaid Fire located in Sonoma County has grown to over 66,000 acres and NASA’s Terra satellite captured this dramatic image of the smoke plume cascading down the coast. OCt 27, 2019. | NASA image.

Here’s How State Regulators Played A Role In California’s Rolling Blackouts, Wildfires. California Wildfires, Climate Change, and the Hot-Dry-Windy Fire Weather Index. The Lights Went Out in California: That Was the Plan All Along. LA Times--Fires. California’s government solely responsible for states forest management and wildfire debacle. Guest essay by Larry Hamlin The inept government, political and regulatory policies of California have clearly driven the present forest management calamitous conditions with that failure leading to disastrous wildfires throughout the state.

Those government and political leaders that are responsible for this situation that has been decades in the making have tried to conceal their incompetence by making scientifically unsupported propaganda claims that “climate change” caused this situation. Why California burns – its forests have too many trees. Cal Fire report pinpoints thinning of forests to reduce Ca. wildfire risks.

Guest essay by Larry Hamlin A new February 22, 2019 report was issued by the California Department of Forestry and Fire Protection (Cal Fire) which announces a plan that the state of California needs to implement to address forest management and community development actions required immediately to accomplish reductions in risks of future wildfires.

Specifically the report notes that: “an epidemic of dead and dying trees, and the proliferation of new homes in the wildland urban interface (WUI) magnify the threat and place substantially more people and property at risk than in preceding decades.” California acknowledges government policy failures in wildfires – not nebulous “climate change” excuses. Solar energy may have caused California’s wildfires. A long view of California’s climate. Wildfires Caused By Bad Environmental Policy Are Causing California Forests To Be Net CO2 Emitters. California’s Wildfire History – in one map. Cliff Mass Weather and Climate Blog: Was Global Warming A Significant Factor in California's Camp Fire? The Answer is Clearly No. Blaming Climate–Ignoring Incompetence. Untitled.

Fact-checking the NY Times’ Fact-checking. #CampFire #WoolseyFire Blaming climate – ignoring incompetence. Looking At Causes of Recent Wildfires and Resultant Property Damage, It's Hard To Point The Finger Solely or Even Mostly at CO2. California, Temperatures, and Acres Burned. Forest Fires in the Golden State. California wildfires: What's the cause? Us. Climate Change Not Behind Calif. Wildfires. Governor Jerry Brown vs. UCLA scientists. California Governor Relaxes Logging Regulations to Mitigate “Climate Change” Fire Risk. Why the Left Coast is Burning. Activists Want To Ban Oil To Stop Fires. Humans, Not Warming, Cause 95% Of Fires.