Freedom of Expression and Bias in Traditional Media

The Journalistic Tattletale and Censorship Industry Suffers Several Well-Deserved Blows - Glenn Greenwald. 'Conservative' news outlets need to be deplatformed, says ex-Facebook exec. The Twilight of America’s Mega-Media. It’s far too early to predict which party will win next year’s election, but not too early to announce the national media as a clear loser in terms of national influence and prestige. 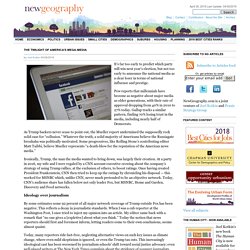 Pew reports that millennials have become as negative about major media as older generations, with their rate of approval dropping from 40% in 2010 to 27% today. Gallup tracks a similar pattern, finding 70% losing trust in the media, including nearly half of Democrats. Editorial Narratives in Science Journalism. Guest Essay by Kip Hansen Science journalism is hard to get right. 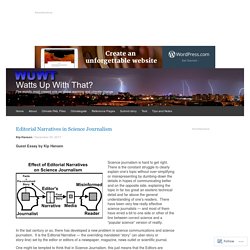 Why We Love Bad News: Understanding Negativity Bias. Every second of every day our brain is bombarded by way too much data than we can possibly process and because nothing is more important to our survival to the species than survival all our visual data, auditory data is funneled to a sliver of the temporal lobe called the amygdala. 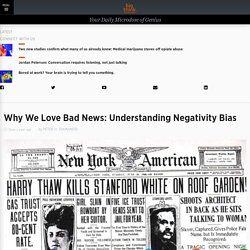 The Eight Categories of Media Bias. Media manipulation is one of the most unfortunate aspects of the Israeli-Palestinian conflict. 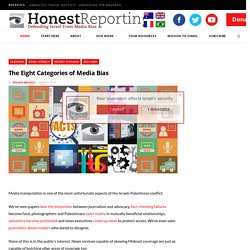 We’ve seen papers blur the distinction between journalism and advocacy, fact-checking failures become fatal, photographers and Palestinians twist reality in mutually beneficial relationships, semantics become politicized and news executives cover up news to protect access. We’ve even seen journalists abuse readers who dared to disagree. None of this is in the public’s interest. Why Headlines Matter. Example of Media Bias: From HonestReporting.com: …An April, 2016 academic study of bit.ly links to BBC, CNN, Fox News, New York Times and Huffington Post articles shared on Twitter found that 59 percent of the links were never clicked. 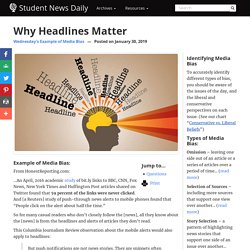 And [a Reuters] study of push-through news alerts to mobile phones found that “People click on the alert about half the time.” Barbara Kay: Collapse of basic fact-checking helps feed the fake-news narrative. Fake news is a big problem. 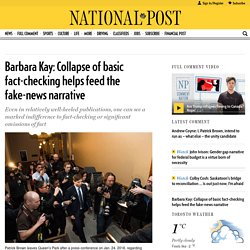 Increasingly, serious citizens look to mainstream media for responsible reportage. When media betrays the public’s trust, it’s scary. And the media does fall short, sadly, both in matters large, which arouse public ire, and in matters that are only apparently small, and don’t. NEWS FLASH: World’s Library Sabotaged. Bowman: the corruption of journalism poisons America. Summary: Journalists shape our view of the world. 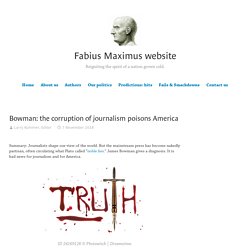 But the mainstream press has become nakedly partisan, often circulating what Plato called “noble lies.” James Bowman gives a diagnosis. It is bad news for journalism and for America. CNN’s “Journalist of the Year” Admitted He Fabricated News. What Should We Make of It? Der Spiegel journalist messed with the wrong small town. By Michele Anderson and Jake Krohn In February 2017, my husband and I attended a concert at our local theater, and were sipping some wine in the lobby before the show started. 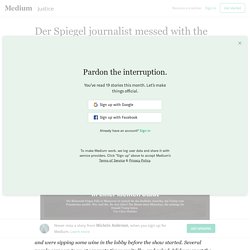 Several people came up to us at separate times excitedly, and asked, “did you meet the German guy yet?!” The Guardian’s Reputation In Tatters After Forger Revealed To Have Co-Authored Assange Smear. Regular followers of WikiLeaks-related news are at this point familiar with the multiple serious infractions of journalistic ethics by Luke Harding and the Guardian, especially (though not exclusively) when it comes to Julian Assange and WikiLeaks. 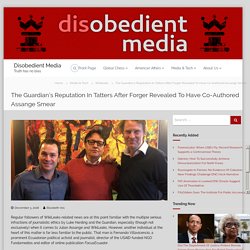 However, another individual at the heart of this matter is far less familiar to the public. That man is Fernando Villavicencio, a prominent Ecuadorian political activist and journalist, director of the USAID-funded NGO Fundamedios and editor of online publication FocusEcuador. Andrew Coyne: It’s when you read details of media bailout that the chill sets in. If you weren’t careful, you might have missed it: a brief 160-word item, tucked deep inside the budget, labelled Supporting Canadian Journalism. 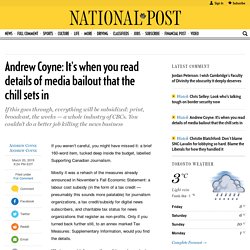 Mostly it was a rehash of the measures already announced in November’s Fall Economic Statement: a labour cost subsidy (in the form of a tax credit — presumably this sounds more palatable) for journalism organizations, a tax credit/subsidy for digital news subscribers, and charitable tax status for news organizations that register as non-profits. Only if you turned back further still, to an annex marked Tax Measures: Supplementary Information, would you find the details.

The Media & the WWF Torture Scandal. News organizations have turned their own journalists into WWF cheerleaders. click for source Earlier this month, BuzzFeed published a three-part exposé about violent goons, funded and equipped by the World Wildlife Fund (WWF), who persecute indigenous communities. In the words of the BuzzFeed journalists, the WWF. Trump-Media Logrolling. By Sam Husseini Today, hundreds of newspapers, at the initiative of The Boston Globe, are purporting to stand up for a free press against Trump’s rhetoric. Today also marks exactly one month since I was dragged out of the July 16 Trump-Putin news conference in Helsinki and locked up until the middle of the night. As laid in my cell, I chuckled at the notion that the city was full of billboards proclaiming Finland was the “land of free press“. So, I’ve grown an especially high sensitivity to both goonish behavior toward journalists trying to ask tough questions — and to those professing they are defending a free press when they are actually engaging in a marketing exercise.

As some have noted, the editorials today will likely help Trump whip up support among his base against a monolithic media. Big media outlets need not actually report news that affects your life and point to serious solutions for social ills. Reporter Tries to Sack Heisman Winner Kyler Murray. This was LOW even for the media: USA Today smears Heisman Trophy winner Kyler Murray. In a report published late Saturday night, just after Murray won the Heisman, USA Today dug up several tweets and claimed that Murray had made homophobic statements on Twitter. [In one instance 7 years ago, Murray tweeted “I don’t even know what you two queers are talking about. I got both of y’all. Especially you.” (by Michelle Malkin, RealClearPolitics) – This week, I did something that USA Today’s executive leadership apparently hadn’t done lately: I read the newspaper’s “principles of ethical conduct for newsrooms.”