Social Isolation Leads to Depression for Seniors. As people age, they may become isolated; and that isolation can lead to depression, according to a recent post from the Straits Times. 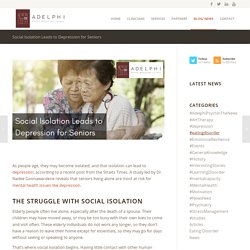 A study led by Dr. Nadee Goonawardene reveals that seniors living alone are most at risk for mental health issues like depression. The Struggle with Social Isolation Elderly people often live alone, especially after the death of a spouse. Their children may have moved away, or may be too busy with their own lives to come and visit often. That’s where social isolation begins. Seniors often struggle with physical ailments that make it difficult to get out and walk, go shopping, or catch the train to visit a friend. The 2016 Study of Isolated Seniors Dr. According to the study, those who were socially isolated spent more time napping, more time sitting in the living room, and more time indoors than the rest of the seniors in the study. Help for Seniors Living in Isolation News Feed from Adelphi Psych Medicine Clinic. 'Like a knife poking my heart': Loss, loneliness and the killing pain of elderly depression. SINGAPORE: Linda Loh remembers a time when her 85-year-old mother used to be a “very nice person”.

As the tantrums began, at first the family put this down to Mdm Lee Sui Yee’s old age – but then, nothing seemed acceptable to her. “I’d talk to her, but she’d say that I never listen to her,” said her daughter. “I’d try to cool myself down … just walk into the kitchen and stay away from her. But she’d also scold me for not staying and talking to her.” An irritable Mdm Lee would especially be worked up about noise, such as a child crying or anybody talking loudly. When she had a fall and was admitted to hospital in July 2016, the family found out the truth.

After she shouted at the nurses, struggled with them and, at one stage, talked about committing suicide – which she nearly did by trying to strangle herself – she was diagnosed with an episode of Major Depressive Disorder. And her recovery has been slow. “Last time, she liked to listen to music – her operas. I once cried for three days. How it affects the elderly's development.

How Social Isolation Affects the Brain. Daisy Fancourt was at her home in Surrey in southeast England when the UK government formally announced a nationwide lockdown.

Speaking in a televised address on March 23, UK Prime Minister Boris Johnson laid out a suite of measures designed to curb the spread of COVID-19, including closing public spaces and requiring people to stay home except for exercise and essential tasks. For Fancourt, an epidemiologist at University College London (UCL), the announcement meant more than just a change to her daily life. It was the starting gun for a huge study, weeks in the planning, that would investigate the effects of enforced isolation and other pandemic-associated changes on the British public. We’re a social species. We really need others to survive. In more normal times, Fancourt and her colleagues study how social factors such as isolation influence mental and physical health. . © istock.com, Maria Zamchy The cognitive effects of prolonged social isolation See full infographic: WEB | PDF. 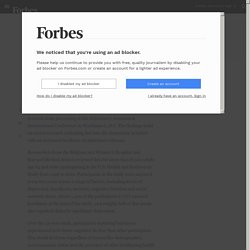 The findings build on recent research indicating that late-life depression is linked with an increased incidence of Alzheimer’s disease. Researchers from the Brigham and Women's Hospital and Harvard Medical School reviewed data for more than 8,300 adults age 65 and older participating in the U.S. Health and Retirement Study from 1998 to 2010. Participants in the study were assessed every two years across a range of factors, including levels of depression, loneliness, memory, cognitive function and social network status. About 1,400 of the participants (17%) reported loneliness at the start of the study, and roughly half of that group also reported clinically significant depression.

Over the 12-year study, participants reporting loneliness experienced 20% faster cognitive decline than other participants. How it affects the elderly's development.