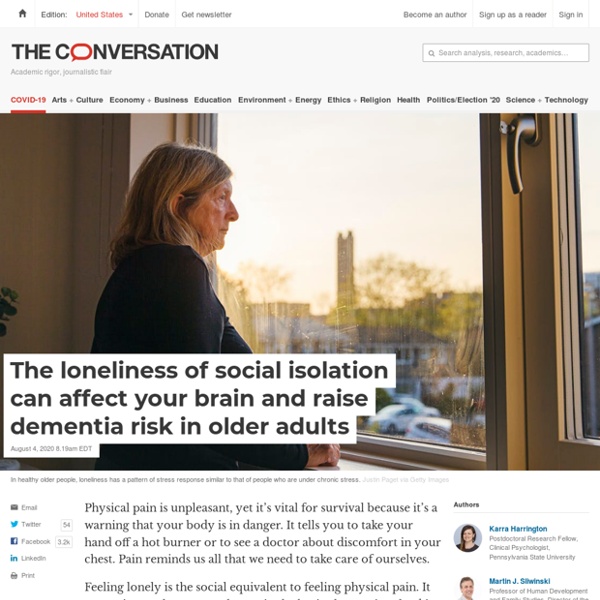 Physical pain is unpleasant, yet it’s vital for survival because it’s a warning that your body is in danger. It tells you to take your hand off a hot burner or to see a doctor about discomfort in your chest. Pain reminds us all that we need to take care of ourselves. Feeling lonely is the social equivalent to feeling physical pain. It even triggers the same pathways in the brain that are involved in processing emotional responses to physical pain. Just like feeling physical pain, feeling lonely and disconnected from others is also a signal that we need to take care of ourselves by seeking the safety and comfort of companionship. As scholars at the Center for Healthy Aging at Penn State, we study the impact of stress on the aging body and brain, including how it can worsen cognitive decline and risk for dementia. The health consequences of loneliness The COVID-19 pandemic has put many older adults’ social lives on hold, leaving them at greater risk for loneliness.

How Social Isolation Affects the Brain Daisy Fancourt was at her home in Surrey in southeast England when the UK government formally announced a nationwide lockdown. Speaking in a televised address on March 23, UK Prime Minister Boris Johnson laid out a suite of measures designed to curb the spread of COVID-19, including closing public spaces and requiring people to stay home except for exercise and essential tasks. For Fancourt, an epidemiologist at University College London (UCL), the announcement meant more than just a change to her daily life. It was the starting gun for a huge study, weeks in the planning, that would investigate the effects of enforced isolation and other pandemic-associated changes on the British public. We’re a social species. We really need others to survive.

Boundless Psychology Physical Development in Late Adulthood The aging process often results in a loss of memory, deteriorated intellectual function, decreased mobility, and higher rates of disease. Learning Objectives Review the physical and neurological changes characteristic of late adulthood COVID-19: Ensuring the elderly don't become isolated during the outbreak SINGAPORE: Organisations that provide care and support for the elderly are stepping up outreach efforts to prevent loneliness and heightened isolation among old folks during tighter safe distancing measures put in place during the COVID-19 pandemic. To protect seniors – a vulnerable group at a higher risk of getting a severe infection – activities for them were already suspended earlier in March. With further distancing measures in place, the lack of social interaction and physical activity could have a negative impact on the mental and physical health of vulnerable elderly populations, said Dr Chris Tsoi a senior consultant from the department of psychological medicine at the National University Hospital (NUH). Madam Koh lives alone and has already seen reduced social interactions over the past few weeks. “No, no I don’t go out. I buy vegetables and then I come home,” the 82-year-old said of her current daily routine.

10 Ways to Help Seniors Deal with Isolation and Depression – DailyCaring Many seniors go through major life changes that could make them more vulnerable to depression. But it’s heartbreaking to stand by and watch someone deal with depression or loneliness on their own. Zara Lewis shares 10 ways you can help your older adult cope with symptoms and improve their quality of life. According to WHO estimates, depression affects about 350 million people of all ages worldwide.

Caregiver Stress and Burnout What is caregiver burnout? While caring for a loved one can be very rewarding, it also involves many stressors. And since caregiving is often a long-term challenge, the emotional impact can snowball over time. You may face years or even decades of caregiving responsibilities. Health effects of social isolation and loneliness Clifford Singer, MD Adjunct Professor, University of Maine Chief, Geriatric Mental Health and Neuropsychiatry Acadia Hospital and Eastern Maine Medical Center 268 Stillwater Avenue Bangor Maine 04402 207.973.6179 csinger@emhs.org Cliff Singer is a geriatrician and psychiatrist. He lives in Orono, Maine and directs the Mood and Memory Clinic at Acadia Hospital and Alzheimer’s Disease Research Program for Acadia Hospital and Eastern Maine Medical Center in Bangor. He trained in general psychiatry and geriatric medicine at Oregon Health and Science University and served on the faculties of psychiatry and neurology there and at the University of Vermont before moving to Maine in 2010.

Ways of Preventing Social Isolation Among Seniors As seniors age, their lives can become more isolated. Their families are no longer at home with them, and they may begin to isolate themselves from the outside world because it has become more difficult for them to get out. Social isolation among seniors can also impact their health. A study by the Proceedings of the National Academy of Sciences showed that seniors have a 26 percent higher death risk than the elderly that remain social. Elderly that are socially isolated may not have anyone in their lives to care for them, and they can develop signs of illness without realizing that they or anyone else knows they need help.

Alzheimer's Drug Discovery Foundation Loneliness is the perception that our social and emotional relationships are not as strong as our desired social and emotional relationships. Social isolation, on the other hand, is an objective measure of solitude and may or may not be distressing. It is estimated that nearly one-third to one-half of elderly individuals may experience social isolation or loneliness [1]. In addition to the detrimental effect loneliness may have on general well-being, loneliness in elderly individuals may also be associated with an increased risk of dementia [2]. Researchers in Spain conducted a meta-analysis of published observational studies that examined whether loneliness is associated with an increased risk of dementia.