How Social Isolation Affects the Brain 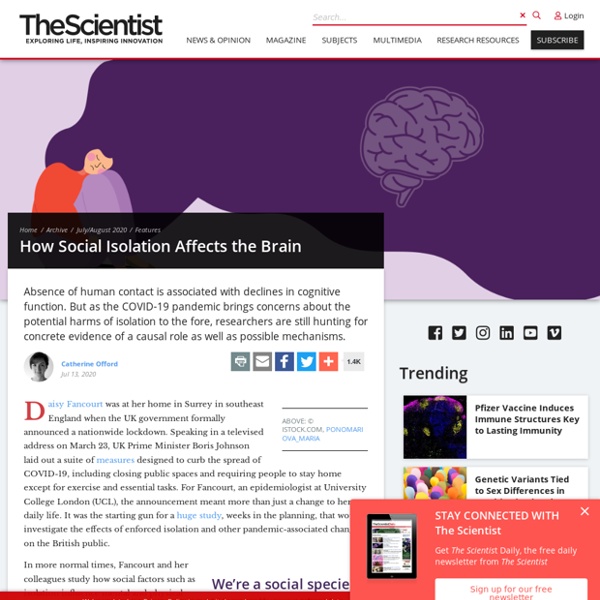 Daisy Fancourt was at her home in Surrey in southeast England when the UK government formally announced a nationwide lockdown. Speaking in a televised address on March 23, UK Prime Minister Boris Johnson laid out a suite of measures designed to curb the spread of COVID-19, including closing public spaces and requiring people to stay home except for exercise and essential tasks. For Fancourt, an epidemiologist at University College London (UCL), the announcement meant more than just a change to her daily life. It was the starting gun for a huge study, weeks in the planning, that would investigate the effects of enforced isolation and other pandemic-associated changes on the British public. We’re a social species. We really need others to survive. In more normal times, Fancourt and her colleagues study how social factors such as isolation influence mental and physical health. © istock.com, Maria Zamchy The cognitive effects of prolonged social isolation See full infographic: WEB | PDF

Older adults who are socially isolated tend to perform worse on tests of thinking abilities Physical pain is unpleasant, yet it’s vital for survival because it’s a warning that your body is in danger. It tells you to take your hand off a hot burner or to see a doctor about discomfort in your chest. Pain reminds us all that we need to take care of ourselves. Feeling lonely is the social equivalent to feeling physical pain. Health effects of social isolation and loneliness Clifford Singer, MD Adjunct Professor, University of Maine Chief, Geriatric Mental Health and Neuropsychiatry Acadia Hospital and Eastern Maine Medical Center 268 Stillwater Avenue Bangor Maine 04402 207.973.6179 csinger@emhs.org Cliff Singer is a geriatrician and psychiatrist. He lives in Orono, Maine and directs the Mood and Memory Clinic at Acadia Hospital and Alzheimer’s Disease Research Program for Acadia Hospital and Eastern Maine Medical Center in Bangor. He trained in general psychiatry and geriatric medicine at Oregon Health and Science University and served on the faculties of psychiatry and neurology there and at the University of Vermont before moving to Maine in 2010.

Boundless Psychology Physical Development in Late Adulthood The aging process often results in a loss of memory, deteriorated intellectual function, decreased mobility, and higher rates of disease. Learning Objectives Review the physical and neurological changes characteristic of late adulthood Social isolation results in memory loss in later life Social isolation contributes to memory loss in older age, research by LSE's Care and Evaluation Centre has shown for the first time. The paper, published in Journals of Gerontology, found that both men and women were affected, but in different ways. Men with high levels of social isolation experienced subsequent memory decline. For women it was not the overall level of lack of social contact, but rather increases in isolation that were important. Researchers studied data from 6123 women and 5110 men over the age of 50, from the English Longitudinal Study of Ageing (ELSA), over six two year intervals from 2002. By using a statistical model to analyze the changes in levels of social isolation and memory loss over time, they were able to establish that isolation precedes memory loss—rather than the other way around.

10 Ways to Help Seniors Deal with Isolation and Depression – DailyCaring Many seniors go through major life changes that could make them more vulnerable to depression. But it’s heartbreaking to stand by and watch someone deal with depression or loneliness on their own. Zara Lewis shares 10 ways you can help your older adult cope with symptoms and improve their quality of life. According to WHO estimates, depression affects about 350 million people of all ages worldwide.

Caregiver Stress and Burnout What is caregiver burnout? While caring for a loved one can be very rewarding, it also involves many stressors. And since caregiving is often a long-term challenge, the emotional impact can snowball over time. You may face years or even decades of caregiving responsibilities. Ways to overcome or avoid social isolation for caregivers There's a difference between isolation and loneliness. Social isolation is the physical separation from other people--a literal lack of social connections or interactions. Meanwhile, loneliness is an emotional response to social isolation--the discrepancy between a person's desired and actual social relationships. In other words, loneliness is the subjective distressed feeling of being alone or separated, while isolation is objective.