Social isolation amongst the elderly will lead to a multitude of negative impacts on their development if left unchecked.

Written by: No Isolation Last updated: June 5, 2020 Social isolation is a term often used interchangeably with loneliness, but while the two are closely related, they do not necessarily mean the same thing. 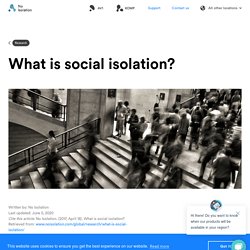 You can be lonely in a crowd, but you will not be socially isolated. Isolation has been defined as an objective state whereby the number of contacts a person has can be counted, whereas loneliness is a subjective experience. While the terms may have slightly different meanings, both can be painful experiences and have a harmful impact on the individual. Social Isolation and Loneliness.

The difference between loneliness and isolation.

In particular, for senior citizens living with others, satisfaction levels fell to the pre-circuit breaker levels of peers living alone, while those living alone saw even lower satisfaction levels as safe distancing measures made it more difficult to find support from friends and the community. As of July, while satisfaction levels have rebounded after the circuit breaker period, which was from April 7 to June 1, they are not back to the levels they were at before. As Singapore's population ages, the proportion of those who remain single and live alone will increase, said Prof Straughan, a sociologist and former Nominated Member of Parliament. Relationship between elderly and younger family members deteriorating during Covid-19 lockdown: Survey. More than half of elderly people feel that their health is deteriorating and their relationship with family members, particularly with their sons and daughters, have further deteriorated during the Covid-19 lockdown, a survey has claimed. 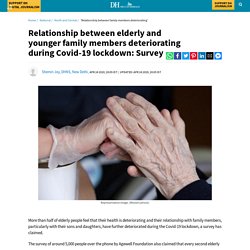 The survey of around 5,000 people over the phone by Agewell Foundation also claimed that every second elderly person was of the view that they are being mistreated, harassed, shouted at, threatened, neglected isolated or marginalised. Also Read: Coronavirus India update: State-wise total number of confirmed cases Around 55% feel that that current lockdown situation is affecting their health condition adversely while 75% said that they missed the "healing touch of their doctor" while 43% have to avoid regular pathological check-ups all of a sudden. Fighting loneliness among elderly during COVID-19 lockdowns. Give them a sense of purpose. Ways of Preventing Social Isolation Among Seniors. As seniors age, their lives can become more isolated. 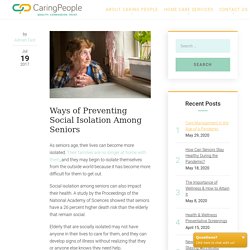 Their families are no longer at home with them, and they may begin to isolate themselves from the outside world because it has become more difficult for them to get out. Regular Exercise. 14 Ways to Help Seniors Avoid Social Isolation - A vast body of evidence demonstrates the physical benefits of a healthy social life. 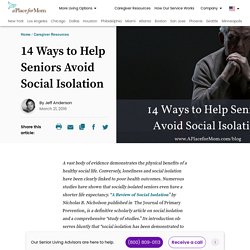 Conversely, loneliness and social isolation have been clearly linked to poor health outcomes. Numerous studies have shown that socially isolated seniors even have a shorter life expectancy. “A Review of Social Isolation” by Nicholas R. Nicholson published in The Journal of Primary Prevention, is a definitive scholarly article on social isolation and a comprehensive “study of studies.” Its introduction observes bluntly that “social isolation has been demonstrated to lead to numerous detrimental health effects in older adults, including increased risk for all-cause mortality, dementia, increase risk for re-hospitalization, and an increased number of falls.”

Social isolation among seniors is alarmingly common, and will continue to increase in prevalence as the older population grows. Here are some ways to promote social health and connectedness: 1. Talk with a Senior Living Advisor 2. 3. 4. 5. 6. 7. Meal Sharing. Tackling a silent beast : Strategies for reducing loneliness and social isolation. Nobody relishes the thought of getting older with no one at their side to provide support, love, and laughter through good times and bad. 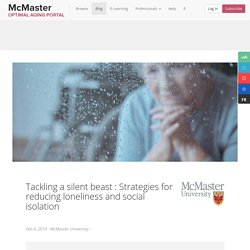 Unfortunately, about 40% of older adults experience loneliness, while 7-17% report being socially isolated. Pet-Raising. 10 Ways to Help Seniors Deal with Isolation and Depression – DailyCaring. Many seniors go through major life changes that could make them more vulnerable to depression. 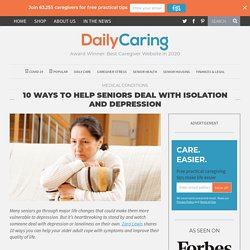 But it’s heartbreaking to stand by and watch someone deal with depression or loneliness on their own. Zara Lewis shares 10 ways you can help your older adult cope with symptoms and improve their quality of life. According to WHO estimates, depression affects about 350 million people of all ages worldwide. While coping with depression is tough, it’s even more difficult to watch an aging family member struggle with it.

As my depressed mother-in-law’s caregiver, I’ve come up with a list of tips I wish to share with other caregivers to make it easier for them to help their older adult deal with isolation and depression. 1. Many seniors who live alone are prone to sleeping problems which can aggravate depression. If the person suffers from sundowning or sleep disorder, keep engaging activities or necessary medication close at hand. 2. 3. 4. 5. 6. Provide Transportation   Addressing Social Isolation Among Seniors.