Why ‘intentional learning’ is a vital skill for the digital age. By 2022, 133 million new jobs could be created by the Fourth Industrial Revolution. 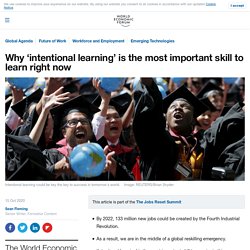 As a result, we are in the middle of a global reskilling emergency. ‘Intentional learning’ is the most important skill to acquire in this new digital age, according to a McKinsey report. At its heart, it’s about treating every experience as an opportunity to learn. The most important skill to acquire in our new digital age? Surprisingly, it’s the ability to learn. In a recent report, McKinsey describes ‘intentional learning’ as the most fundamental skill for professionals to cultivate in the coming decades, saying that: “Few adults have been trained in the core skills and mindsets of effective learners”.

So what is intentional learning? At its heart, intentional learning is the practice of treating every experience as an opportunity to learn something. The four-day virtual event, being held on 20-23 October 2020, comes as the world seeks a way out of the COVID-19 pandemic. License and Republishing. Goodbye “moderators,” hello “audience voice reporters”: Here’s how The Wall Street Journal is refocusing the comments to incentivize better behavior. Editor’s note: The Wall Street Journal is making some changes in how it thinks about commenting and conversation on its digital platforms, announced a few hours ago by editor-in-chief Matt Murray. 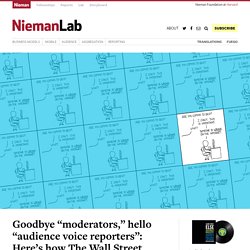 Here, Louise Story, the Journal’s editor of newsroom strategy and interim chief technology and product officer, explains the research and strategy underlying the changes. Our readers this week will see a lot of changes built around the goal of elevating the quality of community discourse on WSJ.com. It’s a project we’ve been working on for months, starting with rigorous research and ending with a strategy to foster healthy conversations around our coverage. First, a few of the changes: Last year, as the midterm election approached, web sites of all sorts were seeing increasingly hostile comments posted by their users.

But at some point, we looked at ourselves and asked what we were doing about it. Reddit and the problems of scale in large communities. Reddit has had an unusually long life on the web. 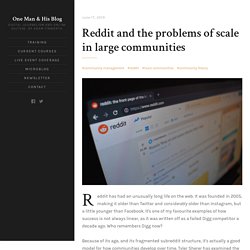 It was founded in 2005, making it older than Twitter and considerably older than Instagram, but a little younger than Facebook. It's one of my favourite examples of how success is not always linear, as it was written off as a failed Digg competitor a decade ago. Who remembers Digg now? Because of its age, and its fragmented subreddit structure, it's actually a good model for how communities develop over time.

Tyler Sherer has examined the increasingly toxic behavior dynamics of the site, in a piece published on Medium last month. After a rather ironic introduction, where he compares it to Tumblr — which was founded two years later — Sherer goes on to examine how the dynamics change as subreddits get larger. The attention-seeking shows up in other ways, too. The Size Problem in Online Communities. Co-Parenting With Alexa. In April, Amazon unveiled the Echo Look, a $199 Alexa add-on that features a hands-free selfie camera controlled by your voice. 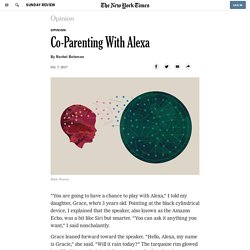 The device doesn’t just hear you, it sees you. According to Amazon, the Style Check feature uses “machine-learning algorithms with advice from fashion specialists” to judge different outfits, awarding them an overall rating to decide which is “better” based on “current trends and what flatters you.” The images it takes of you happen to be stored in the Amazon Web Services cloud until you delete them.

And while the fashion-savvy assistant helps you decide what to wear, it has an ulterior motive: to sell you clothing, including choices from one of Amazon’s own apparel lines, such as Lark & Ro and North Eleven, started in 2016. It’s these kinds of intersections – like this small collision between robot “helpfulness” and a latent commercial agenda — that can make parents like me start to wonder about the ethical niceties of this brave new bot world.

Hey Alexa, what are you teaching my children? Parents’ Toxic Tech Dilemma – Power Trip. Kraut began studying the effects of the internet on humans in the early days of the web. 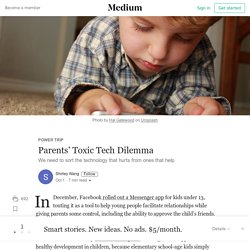 After 12 years at a telecommunications company that was developing and laying down internet cables, he began asking the question of whether this social technology might hurt real-life relationships. In one of the earliest studies on this question, Kraut and his team examined 169 people in 73 households over their first one or two years of web use. They found that over time, these participants communicated less with their household members once they began using the internet. These individuals also reported feeling lonelier and more depressed. Over the years, however, Kraut has begun looking more carefully at the ways in which people use the internet. In his latest study, which has not yet been published, Kraut and his colleagues Siyan Zhao and Jason Hong asked a group of teens and young adults how close they felt to three other people on a daily basis.