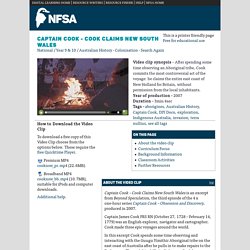 Captain James Cook FRS RN (October 27, 1728 – February 14, 1779) was an English explorer, navigator and cartographer. Cook made three epic voyages around the world. In this excerpt Cook spends some time observing and interacting with the Guugu Yimithir Aboriginal tribe on the east coast of Australia after he pulls in to make repairs to the Endeavour. Through his skills in diplomacy Cook has avoided a major confrontation with the tribe, and of possibly being killed himself, after violence erupts between his crew and the aborigines.

Scenes in the clip dramatising Cook’s journal entries of this time focus on his admiration for their easy lifestyle and enjoyment of life. Captain Cook – Obsession and Discovery is a Film Australia National Interest Program. Knowing and understanding historical events. Captain Cook - Discovery and Exploration. The First Voyage of James Cook. Australian Quotes & Notes - The Quotes - Ancient Times until 1850. European Explorers: The adventures of Captain Cook! All aboard, we’re about to take a trip back in time to when Captain Cook sailed into Sydney Harbour and changed the course of Australia’s history! 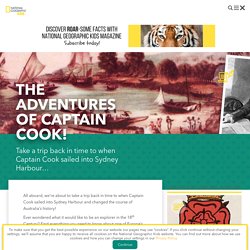 Ever wondered what it would like to be an explorer in the 18th Century? Find everything you need to know about one of Europe’s most famous adventurers, Captain James Cook… Cook's Journal: Daily Entries, 29 April 1770. 29 April 1770 © Transcription of National Library of Australia, Manuscript 1 page 228, 2004Published by South Seas, using the Web Academic Resource Publisher To cite this page use: 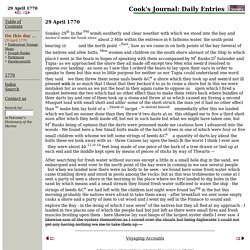 Captain Cook’s voyages of discovery. The first voyage James Cook's first Pacific voyage (1768-1771) was aboard the Endeavour and began on 27 May 1768. 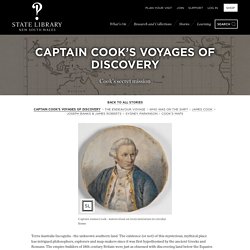 Cook’s voyage had three aims; to establish an observatory at Tahiti in order to record the transit of Venus (when the planet passed between the earth and the sun), on 3 June 1769. The second aim was to record natural history, led by 25-year-old Joseph Banks. Captain James Cook > Biography. These are perhaps the most notable dates in James Cook's life. 1728: Born at Marton (near modern Middlesbrough), Yorkshire, Britain. 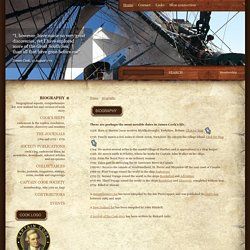 Click for Map 1736: Family moves a few miles to Great Ayton, Yorkshire. He attends the village school. Click for Map 1744: He moves several miles to the coastal village of Staithes and is apprenticed to a shop keeper. 1746: He moves south to Whitby, where he works for Captain John Walker on his ships. 1755: Joins the Royal Navy as an ordinary seaman 1759: Takes part in surveying the St. A comprehensive list has been compiled by the late Paul Capper, and was published in Cook's Log between 1985 and 1996.

A New Zealand list has been compiled by John Mitchell. 1770s - Captain Cook - My Place. In 1768 Lieutenant James Cook (1728–1779) left England in the ship HM Bark Endeavour on his first sea exploration of the Pacific Ocean and the Great Southern Continent. 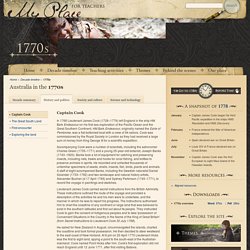 HM Bark Endeavour, originally named the Earle of Pembroke, was a flat-bottomed boat with a crew of 94 sailors. Cook was commissioned by the Royal Society in London as they had received a large sum of money from King George III for a scientific expedition. Accompanying Cook were a number of scientists, including the astronomer Charles Green (1735–1771) and a young 25-year-old botanist, Joseph Banks (1743–1820). Banks took a lot of equipment for catching and preserving insects, including nets, trawls and hooks for coral fishing, and bottles to preserve animals in spirits.

Cook claims Australia. Cook claims east coast 1770: Lieutenant James Cook claims east coast of Australia for Britain Lieutenant James Cook’s journal, 22 August 1770: Notwithstand[ing] I had in the Name of his Majesty taken posession of several places upon this coast I now once more hoisted English Coulers and in the Name of His Majesty King George the Third took posession of the whole Eastern Coast from … Latitude [38° South] down to this place by the Name of New South Wales together with all the Bays, Harbours Rivers and Islands situate upon the said coast after which we fired three Volleys of small Arms which were Answerd by the like number from the Ship. 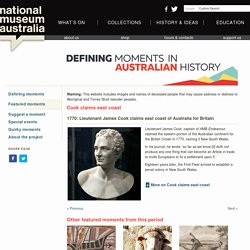 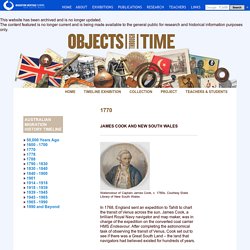 Courtesy State Library of New South Wales In 1768, England sent an expedition to Tahiti to chart the transit of Venus across the sun. James Cook, a brilliant Royal Navy navigator and map maker, was in charge of the expedition on the converted coal carrier HMS Endeavour. After completing the astronomical task of observing the transit of Venus, Cook set out to see if there was a Great South Land – the land that navigators had believed existed for hundreds of years. 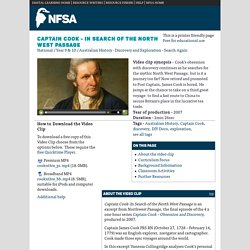 Captain James Cook FRS RN (October 27, 1728 – February 14, 1779) was an English explorer, navigator and cartographer. Cook made three epic voyages around the world. In this excerpt Vanessa Collingridge analyses Cook’s personal journeys as well as his geographic ones. Captain Cook in Hawaii - Society and Environment, Social Systems. Captain Cook in Hawaii is an excerpt from the 4 x one-hour series _Captain Cook – Obsession and Discovery, produced in 2007. 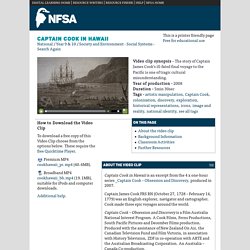 Captain James Cook FRS RN (October 27, 1728 – February 14, 1779) was an English explorer, navigator and cartographer. Cook made three epic voyages around the world. Captain Cook – Obsession and Discovery is a Film Australia National Interest Program. A Cook Films, Ferns Productions, South Pacific Pictures and December Films production. Produced with the assistance of New Zealand On Air, the Canadian Television Fund and Film Victoria, in association with History Television, ZDF in co-operation with ARTE and the Australian Broadcasting Corporation. Background Information. Captain Cook’s Tragic Death - Visual Arts, Art criticism and aesthetics. From the series Hidden Treasures – Inside the National Library of Australia. The National Library of Australia is the country’s largest reference library with over nine million items in its collection, including a surprising number of art works.

In a new series of Hidden Treasures, Betty Churcher presents an insider’s guide to some of the little known and rarely displayed art treasures held by the National Library. From her unique vantage point, Churcher makes intriguing historical connections between paintings and engravings, photography, manuscripts and artifacts, illustrated journals and diaries. These are fascinating tales about the creative process and the works themselves that offer a tantalising insight into Australia’s culture and heritage. A Film Australia National Interest Program in association with Early Works. Students are required to reflect critically on meanings and values associated with particular visual artworks. This is a guide only. Background Information. Captain Cook - The Death of Cook - Australian History, Discovery and Exploration.

Captain Cook- The Death of Cook is an excerpt from Northwest Passage, the final episode of the 4 x one-hour series Captain Cook – Obsession and Discovery, produced in 2007. Captain James Cook FRS RN (October 27, 1728 – February 14, 1779) was an English explorer, navigator and cartographer. Cook made three epic voyages around the world. In this excerpt the events leading up to Cook’s death on 14 February 1779 are dramatised in the documentary and analysed by Vanessa Collingridge.

The commentators used throughout the series sum up his career that has led him to this point of time. He has created a legacy very few can match as a scientist, explorer and commander. After six weeks in Hawaii Cook has set sail but has had to return when Resolution breaks a sail. Background Information top “I had ambition not only to go farther than any man had been before, but as far as it was possible for a man to go.”

Operation Brainstorm. Before James Cook renamed them 250 years ago, these places along the east coast were known in ancient languages - ABC News (Australian Broadcasting Corporation) Updated 26 Aug 2020, 8:16amWed 26 Aug 2020, 8:16am Aboriginal and Torres Strait Islander people have always been here. They were here before European sea navigators came to this land. Navigators such as Spaniard Luis Vaez de Torres, who in 1606 sailed through the Torres Strait Islands giving them the name they bear today, or Dutch explorer Willem Janszoon, who landed on the western side of Cape York Peninsula and charted its coastline in the same year.

Endeavour JournalWhat is Australia’s greatest book? In the National Library of Australia there is a 743-page volume that could lay claim to the title. It is Lieutenant James Cook’s journal, written on board the Endeavour during his trip down under in 1770. Warren Brown leafs through these precious pages to discover Cook’s first impressions and trace the beginning of Australia as we know it today. National TreasuresTake a road-trip of discovery with the irrepressible Warren Brown – political cartoonist, columnist and history “tragic” – as he reveals a fascinating mix of national treasures drawn from public and private collections across Australia.

Life on 'HMS Endeavour' A virtual tour of HMB Endeavour.