The debate over 5G in Switzerland. The prospect of adverse effects of wireless radiation on the human body has sparked fears about 5G technology in Switzerland. 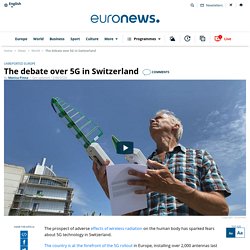 The country is at the forefront of the 5G rollout in Europe, installing over 2,000 antennas last year alone. However, the speed of the implementation is slowing down over some people's concerns that the technology might be harming them. In Nyon, on the banks of Lake Geneva, local resident Anna Frusciante, who is electro-hypersensitive, pointed out to Euronews the number of new antennas. According to the WHO, those who claim to suffer from electro-hypersensitivity report a variety of health problems, which they relate to being exposed to electromagnetic frequencies, such as mobile phone signals.

Quack Book Reviews: EMF*D. [Note: I was, unfortunately, unable to complete a post for today due to a situation that came up over the weekend. 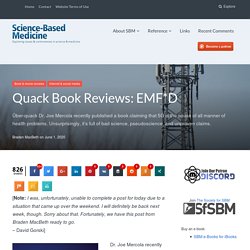 I will definitely be back next week, though. The inconvenient truth about cancer and mobile phones. N 28 March this year, the scientific peer review of a landmark United States government study concluded that there is “clear evidence” that radiation from mobile phones causes cancer, specifically, a heart tissue cancer in rats that is too rare to be explained as random occurrence. 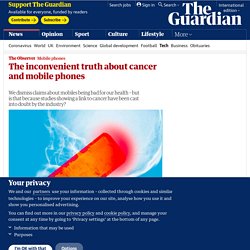 Eleven independent scientists spent three days at Research Triangle Park, North Carolina, discussing the study, which was done by the National Toxicology Program of the US Department of Health and Human Services and ranks among the largest conducted of the health effects of mobile phone radiation. NTP scientists had exposed thousands of rats and mice (whose biological similarities to humans make them useful indicators of human health risks) to doses of radiation equivalent to an average mobile user’s lifetime exposure. Not one major news organisation in the US or Europe reported this scientific news. The Great 5G Conspiracy. Photographs by Sarah Illenberger n the 1970s, the bogeyman was power lines. 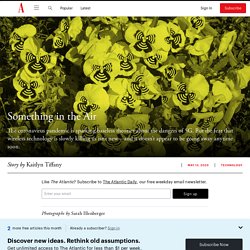 Low-frequency electromagnetic fields were emanating from them all the time, and a shocking 1979 study suggested that children who developed cancer lived near power lines “unduly often.” Around the same time, because of Cold War panic about radiation in general, televisions and microwave ovens also became a possible human health catastrophe. Later, concern bubbled up around a slew of other household appliances, including hair dryers and electric blankets. Now the advance of cellphones and, more recently, the new high-speed networks built to serve them have given rise to a paranoid coalition who believe to varying degrees in a massive cover-up of deleterious harm. It’s too big to be true. Don't Fall Prey to Scaremongering about 5G. In a recent opinion piece for Scientific American, Joel M. 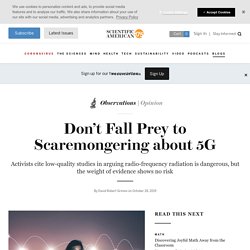 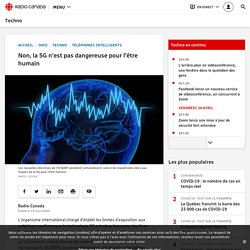 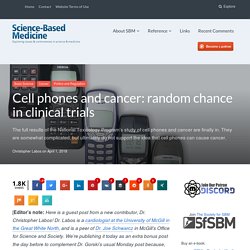 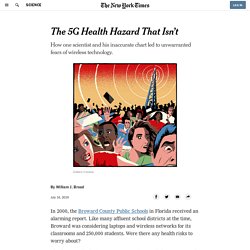 Marvin C. Ziskin, an emeritus professor of medical physics at Temple University School of Medicine, agreed. For decades, Dr. Ziskin explored whether such high frequencies could sow illness. Many experiments, he said, support the safety of high-frequency waves. Despite the benign assessment of the medical establishment, Dr. The FDA Announces That There Is No Link Between Cell Phones And Cancer After Reviewing A Decade of Scientific Publications. The FDA finds no link between cell phones and cancer The FDA reviewed relevant studies published between January 1, 2008 and August 1, 2018, determining that there was no link between cell phones and cancer.Even as frequencies increase to 5G, the safety of cell phones remains. 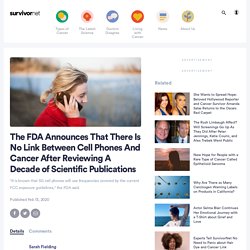 While it’s not uncommon to hear someone warn about links between cell phones and cancer, a new report from the FDA reconfirms there is no proven connection between the two. In a review of relevant studies published between January 1, 2008 and August 1, 2018, the FDA determined that “the available epidemiological and cancer incidence data continues to support the Agency’s determination that there are no quantifiable adverse health effects in humans caused by exposures at or under the current cell phone exposure limits.”

Summed up: You can stop stressing about your phone giving you cancer. Still concerned? Does cell phone radiation increase cancer risk? Here's everything we know. Worried About 5G’s Health Effects? Don’t Be. CWJournal. CWJournal. Is 5G Dangerous? In all the debates about safety issues surrounding 5G, one thing is often overlooked: The safety of people working in the radio infrastructure industry. 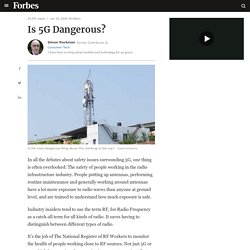 People putting up antennas, performing routine maintenance and generally working around antennas have a lot more exposure to radio waves than anyone at ground level, and are trained to understand how much exposure is safe. Industry insiders tend to use the term RF, for Radio Frequency as a catch-all term for all kinds of radio. Scientific American Says 5G Is Dangerous, Vegetables Are Junk Food. It's official. Scientific American will publish absolutely anything. This is not hyperbole or exaggeration. In August, SciAm published an article claiming that our food supply was "poison," vegetables are "becoming more like sugary snacks," and chronic diseases such as obesity and cancer are due to GMOs and glyphosate.

It was the sort of insanity that you might expect to read on a site with little to no editorial control (like the Huffington Post) or on a conspiracy website (like InfoWars). Due to a severe backlash, SciAm was forced to publish a corrected article, which served as a marginal improvement over the original. The Science Of Why 5G Is (Almost) Certainly Safe For Humans. Getty Over the coming few years, a new set of infrastructure will be rolled out across the world: 5G wireless technology.

Just as 4G networks are able to provide mobile internet speeds hundreds of times faster than 3G — enabling users worldwide to stream HD TV, browse webpages quickly, and even make high-quality video calls — the advent of 5G will enable speeds of up to 100 Gigabits per second: up to 100 times faster than 4G. With each new generation of WiFi that comes out, a new wave of fear-mongering health claims emerges.

They always come along with the same arguments: humans have never been exposed to this much of this type of radiation before, scientists have not demonstrated that the proposed new infrastructure won't be harmful to humans, the World Health Organization has already declared radio-frequency (WiFi) radiation to be "possibly cancerous," and therefore, we should declare a moratorium on this technology until its safety has been established. The anti-5G movement is a new form of fearmongering.

Over the past few months, you may have noticed Kingston yard signs advertising the following: “NO SMALL CELL ANTENNAS! OUR KIDS LIVE HERE! STOP 5G!” That notion has no factual basis and it prevents Kingston from moving forward with technology that can make our daily lives better. Here’s what you need to know about 5G (fifth-generation mobile wireless) and why the anti-5G movement has become yet another scaremongering effort grounded in misinformation and fake news. 5G networks resemble 3G and 4G technologies in that they’re wireless networks allowing subscribers to access mobile Internet. The electromagnetic waves in 5G networks travel shorter distances, so more transmitters are required and they have to be installed closer to ground level.

5G dangers: discover the fact and the fiction. 5G dangers are a concern for many and we'll be updating this feature as advice on 5G evolves and more stories come to light of community concern about 5G - we're tracking the latest news on the situation at the bottom of this article. 5G technology - promising high speeds, lower latency, and the activation of the Internet of Things (IoT) - is still hugely controversial.

Misinformation about Australia’s 5G network. ARPANSA is aware that there is a lot of concerning misinformation circulating throughout the community about the possible impacts of Australia’s planned roll-out of the 5G mobile network. Contrary to some claims, there are no established health effects from the radio waves that the 5G network uses. This network currently runs on radio waves similar to those used in the current 4G network, and in the future will use radio waves with higher frequencies. It is important to note that higher frequencies does not mean higher or more intense exposure.

Higher frequency radio waves are already used in security screening units at airports, police radar guns to check speed, remote sensors and in medicine and these uses have been thoroughly tested and found to have no negative impacts on human health. The 5G Health Hazard That Isn’t. EMF&Health Levitt & Lai Critique. Note: The NRC issued the following disclaimer: "The authors of the study are not affiliated with or employed by the National Research Council of Canada. The views of the authors in no way reflect the opinions of the National Research Council of Canada. Is 5G Wireless Dangerous? No, But Science May Never End the Debate.

The dangers of 5G - coming to a mobile phone near you. RACGP - What do GPs need to know about the new 5G network? Feature Do community concerns about the health impacts of the new 5G mobile network match the evidence? 5G dangers: mmWave microwaves and other health claims debunked. Why mobile phones are NOT a health hazard.

Last week the Observer published an article by Mark Hertsgaard and Mark Dowie on a disturbing topic – the idea that telecoms giants might collude to suppress evidence that wireless technology causes cancer. The feature was well written, ostensibly well researched, and deeply concerning. Its powerful narrative tapped into rich themes; our deep-seated fears about cancer, corporate greed, and technology’s potentially noxious influence on our health. It spread rapidly across social media – facilitated by the very object on which it cast doubt. Demonisation of 5G mobile networks is rooted in technop...

How Worried Should You Be About the Health Risks of 5G? 5G: Upgrade or Uncertainty? Today we're going to have a look at the latest radio bogeyman: 5G cell phone data service. 5G is science's latest answer to the constantly-growing demand for more and faster data, covering more of the planet, connecting more people to the web, and offering faster broadband service. And yet, if you do a Google search, you'll find every imaginable way that someone claims it's physically harmful: everything from it gives you cancer, to autism, to Alzheimer's, to anything else you can think of. Cellphones and cancer: a guide to the messy, frustrating research.

Bushberg submission. Is 5G Safe? 5G mmWave is safe, it's not going to microwave your brain. Phone tower anxiety is real and we're worrying ourselves sick. Analysis By Adam Verrender Updated 9 Jan 2019, 5:07amWed 9 Jan 2019, 5:07am Are mobile phones making us sick? Whack-a-mole: Knocking the “mobile phones cause cancer” claim on the head. The first mobile phone in Australia was switched on in 1987. Since then, their use has grown to become almost universal among teenagers and adults for 15 years.

Untitled. Cellphones Are Still Safe for Humans, Researchers Say. Do Cell Phones Cause Brain Cancer? The Diehards Cling Desperately To Opinion. Here’s how activists manipulate cell phone cancer risk statistics to fool regulators. Electromagnetic Fields and Cancer. Cell Phones and Cancer Risk Fact Sheet. TeleCellulaire041 046DrPlante0410. MOBI-KIDS STUDY: Risk of brain cancer from exposure to radiofrequency fields in childhood and adolescence - Monash Centre for Occupational and Environmental Health (MonCOEH) Seriously, stop with the irresponsible reporting on cellphones and cancer. It's Premature to Conclude That Cell Phones Cause Cancer in Humans. Do Cell Phones Cause Cancer? BY BERNARD LEIKINDeSkeptic » June 9, 2010. Cellphones Do Not Give You Brain Cancer.