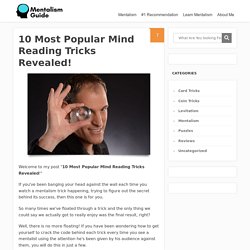 " If you've been banging your head against the wall each time you watch a mentalism trick happening, trying to figure out the secret behind its success, then this one is for you. So many times we've floated through a trick and the only thing we could say we actually got to really enjoy was the final result, right? Reading Quotient: The Indicator of Success. ContentsThe problem: kids aren't reading! 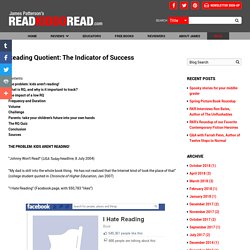 What is RQ, and why is it important to track? The impact of a low RQ Frequency and Duration Volume Challenge Parents: take your children's future into your own hands The RQ Quiz Conclusion Sources The problem: kids aren't reading! Left Brain vs. Right Brain Dominance. Have you ever heard people say that they tend to be more of a right-brain or left-brain thinker? From books to television programs, you've probably heard the phrase mentioned numerous times or perhaps you've even taken an online test to determine which type best describes you.

You've probably spotted at least a few infographics on Pinterest or Facebook claiming to reveal your dominant brain hemisphere. You've probably also come across a few articles or books suggesting you can unleash the hidden creativity of right brain thinking or the deductive logic of left-brain thinking. People described as left-brain thinkers are told that they have strong math and logic skills. Left Brain vs. Right Brain Dominance. 10 Common Myths About Our Visual Brains. 5 Major Differences Between Tactical and Strategic Intelligence. Strategic intelligence and tactical planning differ in several ways. 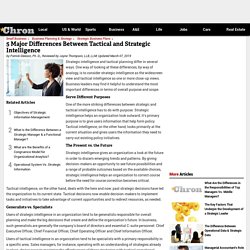 Charleston scientists study iron levels in brain to diagnose ADHD in children. ADHD a 'brain disorder', not just bad behaviour: study. What’s Your Type? The Myers-Briggs Test and the Rise of the Personality Quiz. In 1943, a failed mystery novelist named Isabel Briggs Myers started a career in the new field of personality testing. “The more you know about what a man is like, the more effectively you can work with him or under him, or assign him the right job,” Myers wrote to Edward Hay, a Philadelphia-based HR specialist who administered employee aptitude testing for companies.

Hay offered finger dexterity tests for entry-level clerks and questionnaires about union attitudes for potential supervisors. Myers had something far more radical in mind, a schema to unearth a person’s true character called the Myers-Briggs Type Indicator, which offers a questionnaire that divides test-takers into 16 different possible personality types based on the results. There were no bad personality types, only bad combinations of personality type and employment. Why your brain can read jumbled letters. How does your brain so quickly make sense of what at first glance is nonsense? 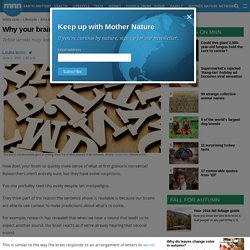 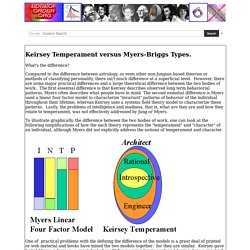 Compared to the difference between astrology, or even other non-Jungian based theories or methods of classifying personality, there isn't much difference at a superficial level. However, there are some major practical differences and a large theoretical difference between the two bodies of work. The first essential difference is that Keirsey describes observed long term behaviorial patterns, Myers often describes what people have in mind. The second essential difference is Myers used a linear four factor model to characterize "invariant" patterns of behavior of the individual throughout their lifetime, whereas Keirsey uses a systems field theory model to characterize these patterns.

Lastly, the problems of intelligence and madness, that is, what are they are and how they relate to temperament, was not effectively addressed by Jung or Myers. The bottom line of the difference between the theories comes in describing the "aspects" of personality. Myers–Briggs Type Indicator - Wikipedia. A chart with descriptions of each Myers–Briggs personality type and the four dichotomies central to the theory The Myers–Briggs Type Indicator (MBTI) is an introspective self-report questionnaire designed to indicate psychological preferences in how people perceive the world and make decisions.[1][2][3] The MBTI was constructed by Katharine Cook Briggs and her daughter Isabel Briggs Myers. 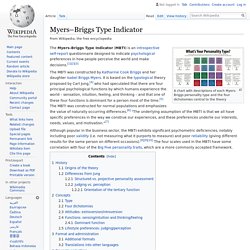 History[edit] Katharine Cook Briggs began her research into personality in 1917. Upon meeting her future son-in-law, she observed marked differences between his personality and that of other family members. After the English translation of Jung's book Psychological Types was published in 1923 (first published in German in 1921), she recognized that Jung's theory was similar to, but went far beyond, her own.[1]:22 Briggs's four types were later identified as corresponding to the Is, EPs, ETJs and EFJs.

Origins of the theory[edit] Differences from Jung[edit] Judging vs. perception[edit] Concepts[edit] Who's in charge – you or your brain? David Eagleman, neuroscientist at Baylor College of Medicine in Texas and bestselling author. 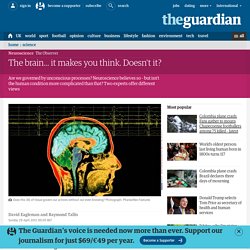 5 Activities That Will Motivate Your Children to Excel in Life. Getting kids motivated to do the things that will help them become successful adults is not an easy job for parents. 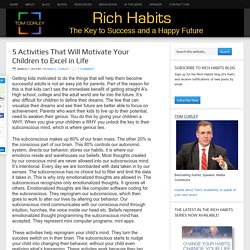 Part of the reason for this is that kids can’t see the immediate benefit of getting straight A’s. High school, college and the adult world are far into the future. It’s also difficult for children to define their dreams. Sorry, but Sarcastic People are Actually Smarter Than You Are. Sarcasm, as they say, is the ability to insult stupid people without them realizing it. 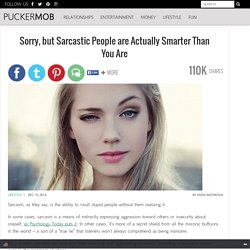 In some cases, sarcasm is a means of indirectly expressing aggression toward others or insecurity about oneself, as Psychology Today puts it. Win an Argument by Asking the Other Person to Outline a Plan. Babies with depressed mothers can 'contract' depression in the womb. Children whose mothers were depressed during pregnancy have a lifelong increased risk of mental illnesses such as anxiety and mood disordersThis is because they have reduced 'structural connectivity' in the right amygdala of their brains - this is the brain region which controls emotion By Daily Mail Reporter Published: 15:10 GMT, 5 December 2013 | Updated: 23:46 GMT, 5 December 2013 Pregnant women with depression can pass the condition on to their unborn babies, research has found. 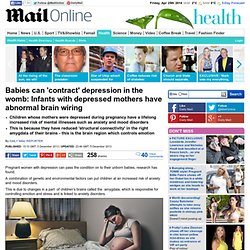