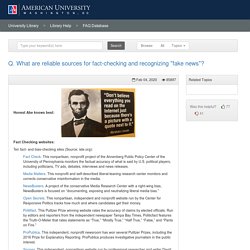 This nonpartisan, nonprofit project of the Annenberg Public Policy Center of the University of Pennsylvania monitors the factual accuracy of what is said by U.S. political players, including politicians, TV ads, debates, interviews and news releases. Media Matters. NewsBusters. Open Secrets. Politifact. ProPublica. Snopes. The Sunlight Foundation. Washington Post Fact Checker. Websites also of interest: AllSides. LibGuides: Recommended guides at Harvard and Pace Classroom exercises: "Factitious" is a game developed at American University to evaluate the credibility of a news story “Four Moves” blog , created by Mike Caufield of Washington State University & Digital Polarization Initiative of the American Democracy Project, presents news stories that may or may not be real—students have to decide. Podcasts, Videos and Webinars: Videos created by Mike Caufield to review his "Four Moves"

Misinformation Directory. America’s Freedom Fighters Americasfreedomfighters.com doesn’t have a disclaimer on its website, but it does say on one of at least five associated Facebook pages: “We Provide Truthful News To Patriots That The MSM Refuses To Report! 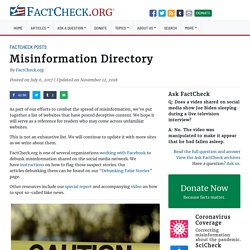 Trump defends debunked video, doubles down on hydroxychloroquine. Like the flu? Trump's coronavirus messaging confuses public, pandemic researchers say. (Reuters) - The coronavirus is not as bad as the seasonal flu. 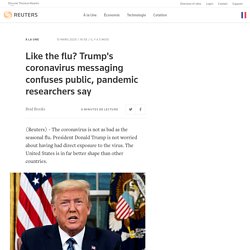 President Donald Trump is not worried about having had direct exposure to the virus. The United States is in far better shape than other countries. Those are some of the messages from Trump to the American public in recent days. Huge MIT Study of ‘Fake News’: Falsehoods Win on Twitter. Ultimately, they found about 126,000 tweets, which, together, had been retweeted more than 4.5 million times. 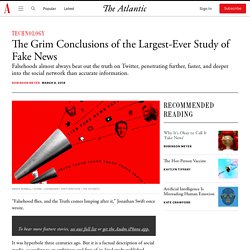 Some linked to “fake” stories hosted on other websites. Some started rumors themselves, either in the text of a tweet or in an attached image. (The team used a special program that could search for words contained within static tweet images.) And some contained true information or linked to it elsewhere. Then they ran a series of analyses, comparing the popularity of the fake rumors with the popularity of the real news. Speaking from MIT this week, Vosoughi gave me an example: There are lots of ways for a tweet to get 10,000 retweets, he said.

Meanwhile, someone without many followers sends Tweet B. Tweet A and Tweet B both have the same size audience, but Tweet B has more “depth,” to use Vosoughi’s term. Here’s the thing: Fake news dominates according to both metrics. Verify: Was there a blackout in DC during protests? Is there any evidence that the government 'jammed' protesters' phones, stopping them from making calls or posting online? 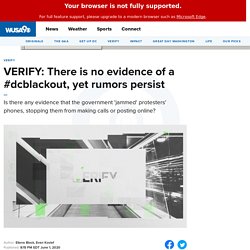 Is there any evidence that the government jammed protesters' phones, stopping them from making calls or protesting online? There is no evidence of this. Peter Newsham- Chief of Police- Metropolitan Police Department Metropolitan Police Department spokesperson Black Lives Matter DC Twitter During the third night of demonstrations near the White House, an online rumor claiming that protesters were unable to get cell service or upload content on social media went viral. Inside the Bizarre Misinformation Campaign About a Hoax Blackout in DC. Demonstrators in Washington, DC on Sunday.Photo by Alex Wong/Getty Images For indispensable reporting on the coronavirus crisis and more, subscribe to Mother Jones' newsletters. 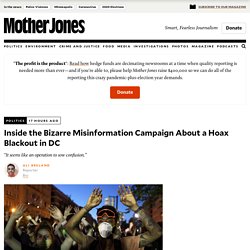 In the late hours of Sunday and early Monday morning, as Washington, DC, was in the throes of massive protests and police used teargas, rubber bullets, and what appeared to be flashbangs on demonstrators drawn out by the death of George Floyd, something confusing started happening online: the hashtag #DCBlackout started going viral on Twitter, accompanied by similar posts on Facebook and Reddit, claiming that sometime at around 1 am, internet service had gone down throughout the district, blocking people from using the internet or posting what was happening on social media. There is almost no evidence that suggests that this actually happened.

Fact-checking resources - Fake News - LibGuides at University of Massachusetts Amherst. Twitter Suspends Accounts Posting About DC Blackout For Spreading ‘Misinformation’ Twitter has suspended accounts that it says were falsely claiming there was blackout in Washington during protests over the death of George Floyd on June 1. 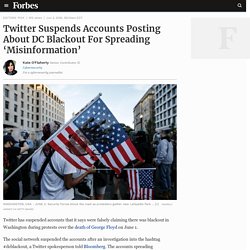 The social network suspended the accounts after an investigation into the hashtag #dcblackout, a Twitter spokesperson told Bloomberg. The accounts spreading misinformation about a communications failure were removed in line with Twitter’s platform manipulation and spam policy, the spokesperson said. According to the Washington Post the DC blackout hashtag first emerged from an account with just three followers, but it was then retweeted more than 500,000 times.

Many citizens suspected a blackout had taken place in order to disrupt the protests, however the claim does indeed seem to be false, according to numerous sources. A Reuters article calls out several Facebook examples with one saying: “These are getting deleted consistently across twitter, don’t stop sharing this information. Trending Twitter hashtag #DCblackout loaded with misinformation.