Now the truth emerges: how the US fuelled the rise of Isis in Syria and Iraq 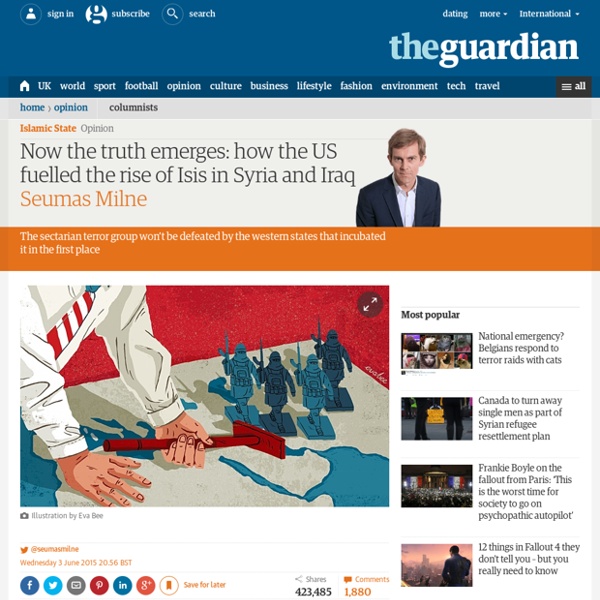 The war on terror, that campaign without end launched 14 years ago by George Bush, is tying itself up in ever more grotesque contortions. On Monday the trial in London of a Swedish man, Bherlin Gildo, accused of terrorism in Syria, collapsed after it became clear British intelligence had been arming the same rebel groups the defendant was charged with supporting. The prosecution abandoned the case, apparently to avoid embarrassing the intelligence services. The defence argued that going ahead with the trial would have been an “affront to justice” when there was plenty of evidence the British state was itself providing “extensive support” to the armed Syrian opposition. That didn’t only include the “non-lethal assistance” boasted of by the government (including body armour and military vehicles), but training, logistical support and the secret supply of “arms on a massive scale”. But terrorism is now squarely in the eye of the beholder. The campaign isn’t going well. Related:  Islamic threat, war on terror and the true face of neoliberalism

14 Years After 9/11, the War on Terror Is Accomplishing Everything bin Laden Hoped It Would Fourteen years later and do you even believe it? Did we actually live it? Are we still living it? And how improbable is that? Fourteen years of wars, interventions, assassinations, torture, kidnappings, black sites, the growth of the American national security state to monumental proportions, and the spread of Islamic extremism across much of the Greater Middle East and Africa. Fourteen years of astronomical expense, bombing campaigns galore, and a military-first foreign policy of repeated defeats, disappointments, and disasters. Fourteen years later, thanks a heap, Osama bin Laden. Fourteen years later, we don’t even grasp what we did. Fourteen years later, the improbability of it all still staggers the imagination, starting with those vast shards of the World Trade Center in downtown Manhattan, the real-world equivalent of the Statue of Liberty sticking out of the sand in the original Planet of the Apes. Fourteen years later, don’t you still find it improbable that George W.

Iraq and Afghanistan Wars Have Cost $75,000 Per American Household HOUSTON (MainStreet) — The crippled, dysfunctional country of Iraq is crumbling. Sunni extremists are marching to Baghdad while Kurdish militants are claiming points north. American armed and trained Iraqi government security forces are cowering in the face of the assaults. While President Obama considers a military response, the toll of nearly 4,500 U.S. troops lost in "Operation Iraqi Freedom" is still very fresh on American's minds. A study released last year by Linda J. Bilmes, a senior lecturer in public policy at Harvard, estimated the cost of the wars in Iraq and Afghanistan would likely result in a cost between $4 trillion to $6 trillion – the most expensive wars in American history. "There are substantial social-economic costs that accompany these statistics," Bilmes adds. While attempting to put a price on lives loss is nothing short of tasteless, it is a cost beyond emotional despair that is rarely considered.

Noam Chomsky: The US, Not Iran, Poses Greatest Threat to World Peace In a speech Saturday at The New School in New York, Noam Chomsky explained why he believes the US poses the greatest threat to world peace. "[The United States] is a rogue state, indifferent to international law and conventions, entitled to resort to violence at will. … Take, for example, the Clinton Doctrine - namely, the United States is free to resort to unilateral use of military power, even for such purposes as to ensure uninhibited access to key markets, energy supplies and strategic resources - let alone security or alleged humanitarian concerns. And adherence to this doctrine is very well confirmed and practiced, as need hardly be discussed among people willing to look at the facts of current history." Chomsky also explained why he believes the US and its closest allies, namely Saudi Arabia and Israel, are undermining prospects for peace in the Middle East. This is a rush transcript. Copy may not be in its final form. [break] AMY GOODMAN: In our Democracy Now!

Noam Chomsky: The Consequences of Wielding a Sledgehammer Against All U.S. Enemies Around the World A continuation of longtime activist and academic Noam Chomsky’s essay, “Masters of Mankind,” from his new book, Who Rules the World? If we continue to wield the sledgehammer, tacitly following the jihadi script, the likely effect is even more violent jihadism with broader appeal. [Below is part 2 of Noam Chomsky’s essay, “Masters of Mankind,” excerpted from his new book, Who Rules the World? If you missed the first part of his essay, click here to read it. This piece first appeared in TomDispatch.] Masters of Mankind (Part 2) In brief, the Global War on Terror sledgehammer strategy has spread jihadi terror from a tiny corner of Afghanistan to much of the world, from Africa through the Levant and South Asia to Southeast Asia. More generally, studies carried out by the Oslo Peace Research Institute show that two-thirds of the region’s conflict fatalities were produced in originally internal disputes where outsiders imposed their solutions. Playing by the Al-Qaeda Game Plan Looking Forward

'They should have known better': Chilcot report means little to Iraqis mourning Baghdad attack | World news A digger chipped away at the facade of a building on one side of the blackened road. On the other a family stood amid the devastation to lay candles for a missing loved one. All around hung posters announcing the deaths of husbands, fathers, sons and cousins. Women had died here too, but they were mourned privately. Hundreds of people had gathered for a fourth day to pick through the ruins of one of the worst atrocities in postwar Iraq, which killed an estimated 250 people and managed to outrage a country that has mostly become inured to loss over 13 painful years. Bystanders in the central Baghdad neighbourhood of Karrada seemed oblivious to the release of the Chilcot report, which roundly condemned Tony Blair’s decision to commit Britain to the war, but which was little more than a footnote to most of the crowd. The few who had seen brief reports from London on Iraqi television shrugged and pointed at the damage, when asked what they made of what was effectively Britain’s mea culpa.

What is Going on in Syria? What is going on in Syria? On the one hand, there was a temporary «ceasefire» to mark Eid al-Fitr and the end of Ramadan. John Kerry, the US Secretary of State, said there were discussions underway to extend it. Since the United States did not support the previous February ceasefire, one has to suppose that Kerry’s comments were just American jive. In February the Russian and US governments agreed to cooperate in starting peace negotiations while continuing to fight Daesh and its al-Qaeda affiliates. «Impossible, we can’t», the Americans replied, we need more time, say, two or three months. «Don’t bomb al-Qaeda?» Well, it means that the Obama administration seeks to protect al-Qaeda, or the al-Nusra front, sheltered by imbedded «moderates», and that it is playing the Russian government for a fool. Russia actually halted its air strikes around Aleppo to conciliate Washington, not understanding – otherwise why do it? And let’s not forget the Iraqis. Wasn’t that a little too hasty?

Why are black people turning to Islam? | Richard Reddie | Opinion Black conversion or "reversion" to Islam is not new; it has been taking place in the African diaspora since time immemorial. However, I looked deeper into the phenomenon to find out why a growing number of Black Britons, especially younger ones, are embracing Islam. Although I am not a Muslim, I have always been interested in Islam – three of my all-time heroes, Muhammad Ali, Malcolm X and Jamaican singer Prince Buster were Muslim converts, and I was intrigued by the way Islam inspired all three to transcend their respective vocations to become icons. What surprised me at the start of my study was that very little of any substance had been written about a religious phenomenon which first came to public prominence in the dubious form of Michael de Freitas, a Trinidad-born, UK-based lapsed Catholic. As Michael X and then Michael Abdul Malik, he was at the forefront of the race equality struggle in Britain during the 1960s.

Seymour Hersh Says Hillary Approved Sending Libya’s Sarin to Syrian Rebels The great investigative journalist Seymour Hersh, in two previous articles in the London Review of Books («Whose Sarin?» and «The Red Line and the Rat Line») has reported that the Obama Administration falsely blamed the government of Syria’s Bashar al-Assad for the sarin gas attack that Obama was trying to use as an excuse to invade Syria; and Hersh pointed to a report from British intelligence saying that the sarin that was used didn’t come from Assad’s stockpiles. Hersh also said that a secret agreement in 2012 was reached between the Obama Administration and the leaders of Turkey, Saudi Arabia, and Qatar, to set up a sarin gas attack and blame it on Assad so that the US could invade and overthrow Assad. However, now, for the first time, Hersh has implicated Hillary Clinton directly in this «rat line». This was, in fact, the Syrian part of the State Department’s Libyan operation, Obama’s operation to set up an excuse for the US doing in Syria what they had already done in Libya.

Related:
Related:  Islamic threat, war on terror and the true face of neoliberalism