Jack Daniels' VDOT Running Calculator. This tab shows you the equivalent race performances for the time you entered.* Get a custom training plan from Jack Daniels What's Your VDOT? 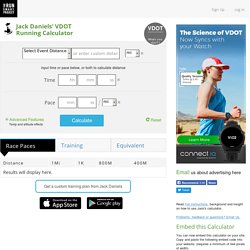 VDOT is a measure of your current running ability. What VDOT Level Have You Reached? Enter all your past performances to see which race result scores the highest in our VDOT scale. White paper VO2max 30.6. VDOT Calculator. DanielsTables3 00 00. Mark Remy's DumbRunner.com. Jack Daniels' VDOT Running Calculator. Correr es mucho más que correr. Los 7 consejos para mejorar tu marca de maratón. The Seven Pillars of Running Wisdom. The Less-Is-More Marathon Plan. How to Calculate the Effect of Humidity on Running Performance - Runners Connect. How many times over the last few months have you stepped outside, from the comfort of your home, into what feels like a sauna. 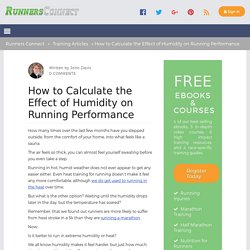 The air feels so thick, you can almost feel yourself sweating before you even take a step. Running in hot, humid weather does not ever appear to get any easier either. Even heat training for running doesn’t make it feel any more comfortable, although we do get used to running in the heat over time. But what is the other option? Waiting until the humidity drops later in the day, but the temperature has soared? Remember, that we found out runners are more likely to suffer from heat stroke in a 5k than they are running a marathon. Metabolic Factors Limiting Performance in Marathon Runners. Citation: Rapoport BI (2010) Metabolic Factors Limiting Performance in Marathon Runners. 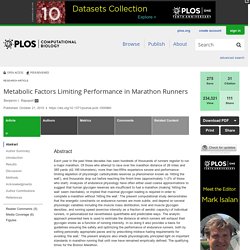 PLoS Comput Biol 6(10): e1000960. 10 Essential Strength Exercises for Runners. El kilómetro 1 de la maratón. How to Run Faster or Run Longer. Running for most people comes down to speed or length of time. 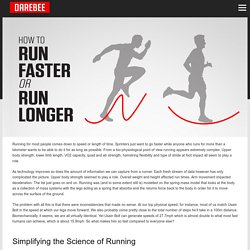 Sprinters just want to go faster while anyone who runs for more than a kilometer wants to be able to do it for as long as possible. From a bio-physiological point of view running appears extremely complex. Upper body strength, lower limb length, VO2 capacity, quad and ab strength, hamstring flexibility and type of stride at foot impact all seem to play a role. As technology improves so does the amount of information we can capture from a runner. Each fresh stream of data however has only complicated the picture.

Mastering Running As You Age : Young Masters: 35-44. 2/5 Peter Mooney VIA FLICKR AND LICENSED UNDER CREATIVE COMMONS ATTRIBUTION (CC BY) 2.0 LICENSE While the increase in recovery time and the decline in top performances are impossible to ignore, this age can be one of the most rewarding of a runner's life. 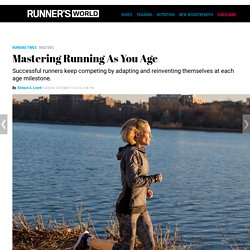 Each age group represents a chance to be the young runner again, providing anticipation as the turn-year approaches and offering the thrill of setting new marks and competing for awards as you enter the new group. Some people who had busy family lives when they were younger may suddenly find new time for training. Consider Colleen Rocereto of Tigard, Oregon. At 49, with the last of her three sons in college (and a 40:56 10K already in her arsenal), she has started joining groups—one on the track and another for weekend runs—in preparation for seeing what she can do in the 50–54 age group.

Lactic Acid Is Your Friend, Not Your Enemy. Bicycling may earn commissions on products that are independently selected by our editorial team. 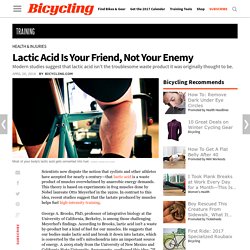 Scientists now dispute the notion that cyclists and other athletes have accepted for nearly a century—that lactic acid is a waste product of muscles overwhelmed by anaerobic energy demands. This theory is based on experiments in frog muscles done by Nobel laureate Otto Meyerhof in the 1920s. In contrast to this idea, recent studies suggest that the lactate produced by muscles helps fuel high-intensity training.

George A. Brooks, PhD, professor of integrative biology at the University of California, Berkeley, is among those challenging Meyerhof's findings. 20-Minute Total-Body Workout. 3 Simple Ways to Improve Running Efficiency. Your stride rate is simply the number of steps you take in a minute. 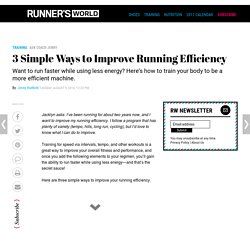 To find it, count the number of strides on one foot for one minute and double it. The goal is to have a stride rate of around 180, or 90 per foot. If it’s much less (170) than that, it likely means you’re creating more vertical energy (oscillation), projecting more upward motion than forward, and you guessed it, wasting energy. It also means you’re employing braking forces with every stride rather than rolling quickly over the ground. The key is to practice patience while increasing your stride rate and decreasing the time you spend on the ground. To improve your stride rate, you can run to a music mix at 180 bpm, invest in a metronome (musician’s timing device), or add the following drill to the beginning or end of your runs (it makes a great active warmup). Coaches Education - Running Training: Principles and Needs. 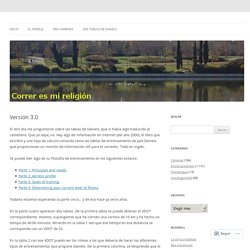 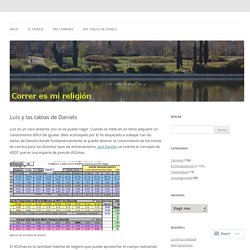 Training: Dealing with performance anxiety in running races. Graph My Run. Running On Air: Breathing Technique. I spent lots of time in the college's physiology building (there were no cross-training facilities) on a Monarch test bike, pedaling away to maintain my conditioning. 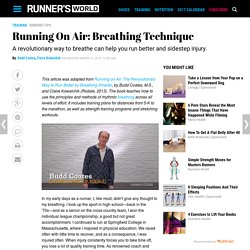 Unfortunately, scientific literature hasn’t provided runners with a clear cut answer to that question. However, by looking at the available evidence, and combining that with practical examples, we’ll show you how you can use both in your training to maximize performance. The Science of "Bonking" and Glycogen Depletion - Runners Connect. Training with Low Carbohydrate Availability. It is generally accepted that optimal adaptation to repeated days of heavy endurance training requires a diet that replenishes muscle glycogen reserves (see the companion paper by M.

Saunders on this site for further information regarding the importance of carbohydrate during heavy training). However, some studies have found that when exercise is undertaken with low muscle glycogen content, the transcription of a number of genes involved in training adaptations is enhanced. In fact, exercising with low muscle glycogen stores amplifies the activation of a number of signaling proteins, including the AMP-activated protein kinase (AMPK) and the p38 mitogen-activated protein kinase (MAPK). These two enzymes have direct roles in controlling the expression and activity of several transcription factors involved in mitochondrial biogenesis and other training adaptations (1,2). A 2005 study by Hansen and colleagues sparked intense interest in the "train low" concept (3). 1. Avoid Hitting The Wall. First law: Food is Chemistry Start with the very spark of movement, wherein our muscle cells power their contractions through the continual breaking and reconnecting of a chain of molecules called ATP.

Cementing their bonds anew requires stealing energy, in this case energy holding together bonds in other compounds-specifically, proteins, fats, and carbohydrates. Even as they all sit on the same nutrition label, these three meta-nutrients are different beasts altogether: Proteins are amino acids, the alphabet beneath our very DNA and the material used to make flesh. Fats are also acids, in the form of oils, and as such help with the insulation of cells. Carbohydrates, on the other hand-literally hydrated carbons, shorthand for the carbon-and-hydrogen hexagons informally known as sugar-are different.

A Simple 3-Step Formula to Prevent Hitting the Wall During a Marathon. Last time, we got an introduction to fueling issues in the marathon and reviewed a neat study on how you can predict whether or not you’ll “hit the wall” by running out of carbohydrates in your next marathon. Today, we’re turning our attention to how to avoid the wall by refueling our carbohydrate reserves while we’re running. The basic premise is simple: we want to consume enough fuel, in the form of carbohydrates, to get ourselves across the finish line without running out of energy. But there are a lot of smaller questions that need answering, too: Fisiología de la energía para correr. Sobre cómo recrear el muro en el entrenamiento, el exprime-limón.

MarathonTraining.com - The Science of Carbohydrate Loading. The Science of Carbohydrate Loading By David Peterson A valid connection between hypoglycemia, fatigue and premature termination of exercise been firmly established and therefore carbohydrate loading is a proven form of boosting running endurance in prolonged events lasting more than two hours in duration. While there are various methods of carbo-loading, the process basically involves consuming large quantities of carbohydrate-rich food in order to saturate the body’s carbohydrate stores. It is proposed that with these increased energy stores, the competitor will be able to avoid exercise-induced hypoglycemia and continue exercising longer than if this saturation process had not occurred. This article aims to further explain how to perform carbohydrate loading and the reasoning behind its practice. The human body is able to store carbohydrates for energy use in the liver and the muscles in the form of a substance known as glycogen.

Thanks David for sharing your article. Sexo y maratón: la primera vez. Las 8 fases al correr un maratón. Por favor; no corras un Maratón. Fueling Do's and Don'ts for Your Next Marathon. Running a successful marathon is undoubtedly challenging. At 26.2 miles, there’s more opportunity for problems to undermine the outcome of the race. And one area that sets the marathon apart from shorter races is fueling.