Rahm Emanuel. Born in Chicago, Emanuel is a graduate of Sarah Lawrence College and Northwestern University. 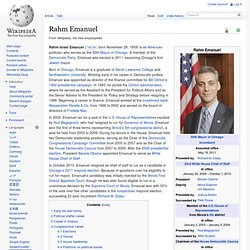 Working early in his career in Democratic politics, Emanuel was appointed as director of the finance committee for Bill Clinton's 1992 presidential campaign. In 1993, he joined the Clinton administration, where he served as the Assistant to the President for Political Affairs and as the Senior Advisor to the President for Policy and Strategy before resigning in 1998. Beginning a career in finance, Emanuel worked at the investment bank Wasserstein Perella & Co. from 1998 to 2002 and served on the board of directors of Freddie Mac. In 2002, Emanuel ran for a seat in the U.S. House of Representatives vacated by Rod Blagojevich, who had resigned to run for Governor of Illinois. In October 2010, Emanuel resigned as chief of staff to run as a candidate in Chicago's 2011 mayoral election.

Valerie Jarrett. Valerie Bowman Jarrett (born November 14, 1956) is a Senior Advisor to the President of the United States and Assistant to the President for Public Liaison and Intergovernmental Affairs in the Obama administration. 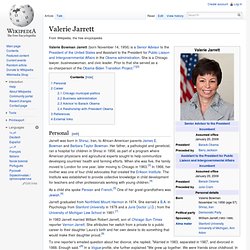 She is a Chicago lawyer, businesswoman, and civic leader. Prior to that she served as a co-chairperson of the Obama-Biden Transition Project.[1][2] Personal[edit] Jarrett was born in Shiraz, Iran, to African-American parents James E. Bowman and Barbara Taylor Bowman. As a child she spoke Persian and French.[5] One of her great-grandfathers was Jewish.[6] In 1983 Jarrett married William Robert Jarrett, son of Chicago Sun-Times reporter Vernon Jarrett. Career[edit] Chicago municipal politics[edit] Jarrett got her start in Chicago politics in 1987 working for Mayor Harold Washington[9] as Deputy Corporation Counsel for Finance and Development.[10] Jarrett continued to work in the mayor's office in the 1990s. 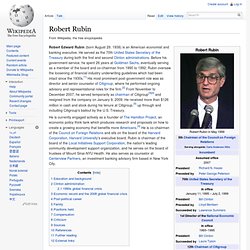 He served as the 70th United States Secretary of the Treasury during both the first and second Clinton administrations. Before his government service, he spent 26 years at Goldman Sachs, eventually serving as a member of the board and co-chairman from 1990 to 1992; Rubin oversaw the loosening of financial industry underwriting guidelines which had been intact since the 1930s.[1] His most prominent post-government role was as director and senior counselor of Citigroup, where he performed ongoing advisory and representational roles for the firm.[2] From November to December 2007, he served temporarily as chairman of Citigroup[3][4] and resigned from the company on January 9, 2009. He received more than $126 million in cash and stock during his tenure at Citigroup,[5] up through and including Citigroup's bailout by the U.S.

Treasury. Sarah Bloom Raskin. Sarah Bloom Raskin (Born April 15, 1961) is an American attorney and regulator, who was formerly a member of the Board of Governors of the Federal Reserve System and current United States Deputy Secretary of the Treasury. 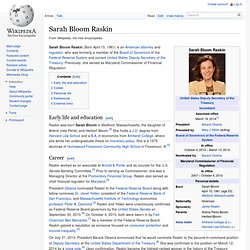 Previously, she served as Maryland Commissioner of Financial Regulation. Early life and education[edit] Raskin was born Sarah Bloom in Medford, Massachusetts, the daughter of Arlene (née Perlis) and Herbert Bloom.[2] She holds a J.D. degree from Harvard Law School and a B.A. in economics from Amherst College, where she wrote her undergraduate thesis on monetary policy. She is a 1979 alumnae of Homewood-Flossmoor Community High School in Flossmoor, Ill.[3] Career[edit] Raskin worked as an associate at Arnold & Porter and as counsel for the U.S. President Obama nominated Raskin to the Federal Reserve Board along with fellow nominees Dr. Janet Yellen. Janet Louise Yellen (born August 13, 1946) is an American economist. 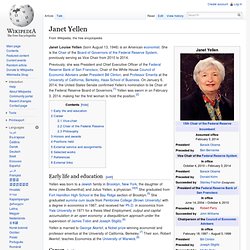 George Akerlof. George Arthur Akerlof (born June 17, 1940) is an American economist and Koshland Professor of Economics at the University of California, Berkeley. 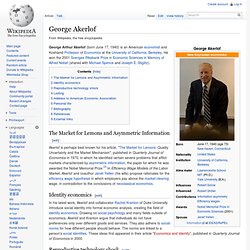 He won the 2001 Sveriges Riksbank Prize in Economic Sciences in Memory of Alfred Nobel (shared with Michael Spence and Joseph E. Stiglitz). Peter Diamond. Origins, education and career[edit] Diamond was born to a Jewish family in New York City.[3][4][5] His grandparents immigrated to the U.S. at the turn of the 20th century. 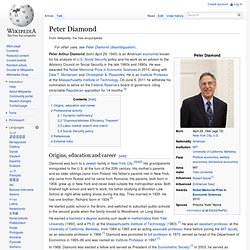 His mother's parents and six older siblings came from Poland. His father's parents met in New York, she came from Russia and he came from Romania. His parents, both born in 1908, grew up in New York and never lived outside the metropolitan area. Both finished high school and went to work, his father studying at Brooklyn Law School at night while selling shoes during the day. Donald Kohn. Ben Bernanke. Ben Shalom Bernanke[1] (/bərˈnæŋki/ bər-NANG-kee;[2] born December 13, 1953) is an American economist at the Brookings Institution[3] who served two terms as chairman of the Federal Reserve, the central bank of the United States from 2006 to 2014. 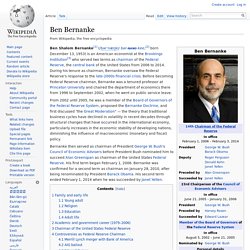 During his tenure as chairman, Bernanke oversaw the Federal Reserve's response to the late-2000s financial crisis. Before becoming Federal Reserve chairman, Bernanke was a tenured professor at Princeton University and chaired the department of economics there from 1996 to September 2002, when he went on public service leave. Bernanke then served as chairman of President George W. Bush's Council of Economic Advisers before President Bush nominated him to succeed Alan Greenspan as chairman of the United States Federal Reserve. His first term began February 1, 2006. Elena Kagan. Elena Kagan (pronounced /ˈkeɪɡən/; born April 28, 1960)[3] is an Associate Justice of the Supreme Court of the United States. 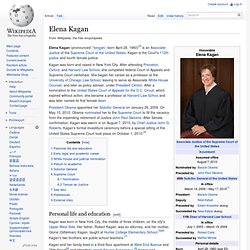 Kagan is the Court's 112th justice and fourth female justice. President Obama appointed her Solicitor General on January 26, 2009. On May 10, 2010, Obama nominated her to the Supreme Court to fill the vacancy from the impending retirement of Justice John Paul Stevens. After Senate confirmation, Kagan was sworn in on August 7, 2010, by Chief Justice John G. Roberts. Ruth Bader Ginsburg. Ruth Joan Bader Ginsburg (born March 15, 1933) is an Associate Justice of the Supreme Court of the United States. 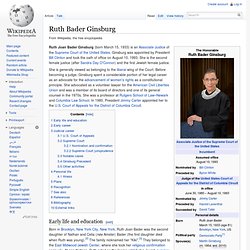 Ginsburg was appointed by President Bill Clinton and took the oath of office on August 10, 1993. She is the second female justice (after Sandra Day O'Connor) and the first Jewish female justice. She is generally viewed as belonging to the liberal wing of the Court. Before becoming a judge, Ginsburg spent a considerable portion of her legal career as an advocate for the advancement of women's rights as a constitutional principle. Stephen Breyer. Stephen Gerald Breyer (/ˈbraɪər/; born August 15, 1938) is an Associate Justice of the Supreme Court of the United States.

Appointed by President Bill Clinton in 1994, and known for his pragmatic approach to constitutional law, Breyer is generally associated with the more liberal side of the Court.[3] Following a clerkship with Supreme Court Associate Justice Arthur Goldberg in 1964, Breyer became well known as a law professor and lecturer at Harvard Law School, starting in 1967. There he specialized in administrative law, writing a number of influential textbooks that remain in use today. He held other prominent positions before being nominated for the Supreme Court, including special assistant to the United States Assistant Attorney General for Antitrust, assistant special prosecutor on the Watergate Special Prosecution Force in 1973, and serving on the First Circuit Court of Appeals from 1980 to 1994.

He worked as the General Counsel of the Michigan Civil Rights Commission from 1964 to 1967, and as a special assistant attorney general for the Michigan Attorney General's Office. Levin was elected to the Detroit City Council in 1968, serving from 1969 to 1977, and was president of the City Council from 1973 to 1977. Early life, education and career[edit] Detroit City Council[edit] Henry Waxman. Joe Lieberman. Lawrence Summers. Lawrence Henry "Larry" Summers (born November 30, 1954) is an American economist who is President Emeritus and Charles W. Eliot University Professor of Harvard University.[2]