Trump wages war against GOP. The state attorney general's office in Palm Beach County, Florida, will not prosecute Donald Trump's campaign manager Corey Lewandowski for battery, according to sources familiar with the case. 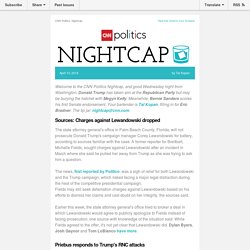 A former reporter for Breitbart, Michelle Fields, sought charges against Lewandowski after an incident in March where she said he pulled her away from Trump as she was trying to ask him a question. The news, first reported by Politico, was a sigh of relief for both Lewandowski and the Trump campaign, which risked facing a major legal distraction during the heat of the competitive presidential campaign. Fields may still seek defamation charges against Lewandowski based on his efforts to dismiss her claims and cast doubt on her integrity, the sources said. Earlier this week, the state attorney general's office tried to broker a deal in which Lewandowski would agree to publicly apologize to Fields instead of facing prosecution, one source with knowledge of the situation said. Is Trump about to reboot? Donald Trump met Wednesday with GOP strategist Paul Manafort, a huddle that suggests campaign changes could be in the works after the billionaire lost the Wisconsin primary and is facing an uphill climb to clinch the Republican presidential nomination before the convention, report CNN's John King, Jim Acosta and Ashley Killough. 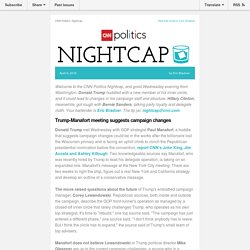 Two knowledgeable sources say Manafort, who was recently hired by Trump to lead his delegate operation, is taking on an expanded role. Manafort's message at the New York City meeting: There are two weeks to right the ship, figure out a real New York and California strategy and develop an outline of a conservative message. Clinton vs. Sanders: Who has a New York state of mind? CNN's Stephen Collinson reports: Everything Hillary Clinton is doing ahead of the April 19 New York primary -- from television interviews to a subway ride on Thursday morning -- is designed to underscore her home court advantage over her Brooklyn-born rival. 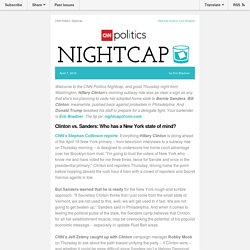 "I'm going to trust the voters of New York who know me and have voted for me three times, twice for Senate and once in the presidential primary," Clinton told reporters Thursday, driving home the point before hopping aboard the rush hour 4 train with a crowd of reporters and Secret Service agents in tow. But Sanders warned that he is ready for the New York rough-and-tumble approach. "If Secretary Clinton thinks that I just come from the small state of Vermont, we are not used to this, well, we will get used to it fast. Can Cruz make Wisconsin a turning point in the GOP race? Donald Trump wouldn't concede Wisconsin while campaigning there Tuesday. 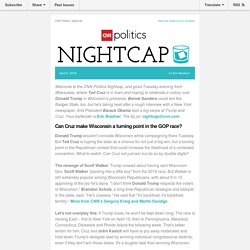 But Ted Cruz is hyping the state as a chance for not just a big win, but a turning point in the Republican contest that could increase the likelihood of a contested convention. What to watch: Can Cruz not just win but do so by double digits? The revenge of Scott Walker: Trump crowed about having sent Wisconsin Gov. Scott Walker "packing like a little boy" from the 2016 race. But Walker is still extremely popular among Wisconsin Republicans, with about 8 in 10 approving of the job he's done. Cruz wins the all-weekend delegate dash. Ted Cruz, Donald Trump and John Kasich spent most of their weekends in Wisconsin, but there was a weekend-long scramble for delegates in North Dakota, Colorado and Tennessee -- each at key stages of a delegate-selection process that anti-Trump forces within the GOP hope will deny him the 1,237 it takes to clinch the party's nomination. 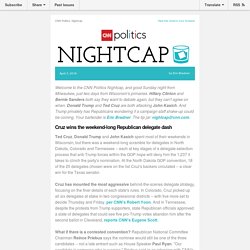 At the North Dakota GOP convention, 18 of the 25 delegates chosen were on the list Cruz's backers circulated -- a clear win for the Texas senator. Cruz has mounted the most aggressive behind-the-scenes delegate strategy, focusing on the finer details of each state's rules. In Colorado, Cruz picked up all six delegates at stake in two congressional districts -- with five more set to decide Thursday and Friday, per CNN's Robert Yoon. What if there is a contested convention?

Republican National Committee Chairman Reince Priebus says the nominee would still be one of the three candidates -- not a late entrant such as House Speaker Paul Ryan. Trump caps tumultuous week with RNC meeting. From CNN's Jeff Zeleny and Dan Merica: When Hillary Clinton lost the New Hampshire primary to Bernie Sanders in February, Robby Mook, her campaign manager, took the long view and declared the nomination would "very likely be won in March, not February. 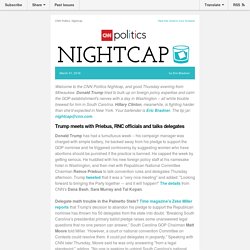 " The campaign is now taking an even longer view, with April now being the month they hope to put Sanders away. It's an optimistic projection, with Sanders' support far from fading and the Vermont senator vowing to compete in primaries and caucuses through June 7 in California and possibly to the Democratic Convention. On Wisconsin: Cruz, Sanders try to topple the front-runners. When the Badger State votes on Tuesday, it could give America something more like Groundhog Day: Several more weeks of competitive primaries. 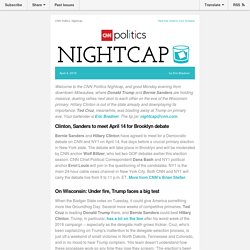 Ted Cruz is leading Donald Trump there, and Bernie Sanders could best Hillary Clinton. Trump, in particular, has a lot on the line after his worst week of the 2016 campaign -- especially as the delegate math grows trickier. Cruz, who's been capitalizing on Trump's inattention to the delegate-selection process, is just off a weekend of small victories in North Dakota, Tennessee and Colorado, and in no mood to hear Trump complain. “His team doesn’t understand how these processes work so any time they lose they scream, ‘The election’s been stolen from us,’ ” Cruz, who has retail-politicked his way across Wisconsin as if it were Iowa, said Monday on WISN radio.

Campaigning 'like a Brooklynite' and Trump's #NeverTrump radio interview. 'Leave Heidi the hell alone' That's what Ted Cruz had to say after Donald Trump blasted the Texas senator's wife, Heidi, on Twitter Tuesday and then again Wednesday with a retweet seeming to dig at her appearance relative to Melania Trump's. 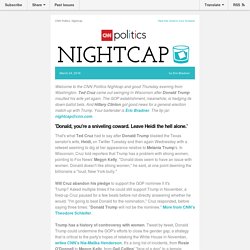 Trump under fire after abortion ‘punishment' pirouette. Donald Trump set off his latest campaign controversy when he said that "there has to be some form of punishment" for women who undergo abortions if the procedure were outlawed. 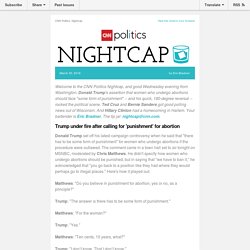 The comment came in a town hall set to air tonight on MSNBC, moderated by Chris Matthews. He didn't specify how women who undergo abortions should be punished, but in saying that "we have to ban it," he acknowledged that "you go back to a position like they had where they would perhaps go to illegal places. " Trump stands by his man.

Donald Trump's campaign manager Corey Lewandowski was arrested and charged early Tuesday in Jupiter, Florida, with simple battery of former Breitbart reporter Michelle Fields, the latest in a long string of controversies to engulf the campaign. 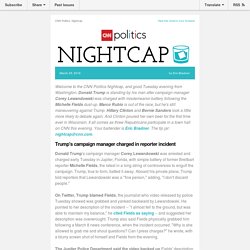 Trump, true to form, batted it away. Aboard his private plane, Trump told reporters that Lewandowski was a "fine person," adding, "I don't discard people. " On Twitter, Trump blamed Fields, the journalist who video released by police Tuesday showed was grabbed and yanked backward by Lewandowski. He pointed to her description of the incident -- "I almost fell to the ground, but was able to maintain my balance," he cited Fields as saying -- and suggested her description was overwrought. Trump also said Fields physically grabbed him following a March 8 news conference, when the incident occurred.

The Jupiter Police Department said the video backed up Fields' description of what happened. Is Lewandowski going anywhere? Brussels fallout: Trump wants torture; Cruz calls for Muslim neighborhood patrols. Hillary Clinton and Donald Trump will each try to build on their delegate advantages in Arizona's primaries Tuesday. Their second-place rivals, Bernie Sanders and Ted Cruz, are both eyeing Utah's caucuses as an opportunity to keep pace in the delegate count. And for Sanders, Idaho's caucuses represent a chance to take two of the night's three contests. John Kasich, meanwhile, will attempt to prove he can compete across the map, even though he's expected to trail Trump and Cruz on the night. Trump stands by his man. 'Leave Heidi the hell alone' Trump winning 'would be like Christmas in the Kremlin,' Clinton says. First it was Lindsey Graham.

Then Mitt Romney. Now, Jeb Bush is getting on the Ted Cruz train. Despite anger among Senate Republicans over his past tactics, some members of the GOP establishment are coming around to the Texas senator's candidacy -- out of pragmatism if not enthusiasm. Trump's anti-Washington campaign comes to Washington. Set on convincing his doubters he's more than a rabble-rouser, Donald Trump took his anti-establishment campaign for the Republican presidential nomination to the heart of the establishment. "If people want to be smart, they should embrace this movement," said Trump at a news conference at Washington's Old Post Office Pavilion building, which he is converting into a luxury hotel. He warned that if he is not embraced, the party would go down to a "massive defeat," CNN's Stephen Collinson reports. Trump spoke at the pro-Israel AIPAC conference, ad-libbing "believe me" while following along with a prepared speech -- a major departure from his usual campaign-trail tactics.

Election night: Bernie's big chance and Trump's double-knockout bid. Hillary Clinton's campaign is confident she will rack up more delegates than Bernie Sanders on the strength of her showings in Florida and North Carolina -- and that's the public face her aides will put on the night's results, no matter what happens in the Midwest. What Obama's Merrick Garland choice means for the 2016 campaign. From CNN's Stephen Collinson: In the wild and whirling age of Donald Trump, President Barack Obama went for stable, sober and conventional.

Obama's pick of Judge Merrick Garland for the vacant Supreme Court seat Wednesday was an intriguing, multilayered move in his last great showdown with Republicans that comes at a time of volatile political upheaval. Election eve: Rubio and Kasich make their home stands, Clinton fights for Chicago. NIGHTCAP: Biden-watch: Staffing up a campaign-in-waiting. The first Democratic presidential debate drew a massive audience of likely primary voters last week, with 31% tuning in, per a new CNN/ORC poll.

And more than 6-in-10 of those who watched say Hillary Clinton delivered the best performance. NIGHTCAP: Bush hits Rubio's risk factor, but not his abortion stance. Conservative megafinancier Charles Koch told USA Today's Fredreka Schouten that he has "no plans to support anybody in the primary now" -- sending a signal that the candidates need to step up their games to win him over. Koch said it's not just about "what they say" -- and that candidates' rhetoric alone won't be enough to win his backing.

“If they start saying things we think are beneficial overall and will change the trajectory of the country, then that would be good, but we have to believe also they’ll follow through on it, and by and large, candidates don’t do that.” NIGHTCAP: Cruz and Rubio finally spar on immigration; Conservatives split over military spending. When Hillary Clinton visited a Marine recruiting office in 1975, she may have been testing the military branch's gender equity stance, a longtime friend told CNN Thursday. Clinton's tale of being turned away at an Arkansas recruiting office has been scrutinized since she retold the story this week in New Hampshire, raising questions about why a young lawyer known for her anti-war views would try to join the Marines amid a new job and upcoming marriage. Ann Henry, who met Clinton in 1974 after she moved to Fayetteville, said in an interview that she can remember conversations with Clinton and another friend about testing the way the military treated women who were interested in enlisting.