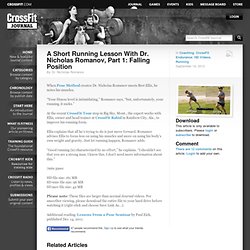 Nicholas Romanov meets Bret Ellis, he notes his muscles. “Your fitness level is intimidating,” Romanov says, “but, unfortunately, your running, it sucks.” At the recent CrossFit Tour stop in Big Sky, Mont., the expert works with Ellis, owner and head trainer at CrossFit Rabid in Rainbow City, Ala., to improve his running form. Ellis explains that all he’s trying to do is just move forward. Romanov advises Ellis to focus less on using his muscles and more on using his body’s own weight and gravity. “Good running (is) characterized by no effort,” he explains. 7min 59sec HD file size: 161 MB SD wmv file size: 96 MB SD mov file size: 42 MB Please note: These files are larger than normal Journal videos. Library.crossfit.com/premium/video/CFJ_CFTour_RomanovShortLesson_P1_ipod.mov?e=1407943277&h=3542d04cc4367eee5e781f76f982d336.

Library.crossfit.com/premium/video/CFJ_CFTour_RomanovShortLessonPartTwo.mp4?e=1407942450&h=3f948c24f1f9573808c536af40faec54. Efficient Running Technique. Running Cadence - Recent Research and Metronomes. One of the most common running technique dysfunctions we see in triathletes and runners across all levels is the tendency to overstride, creating excessive braking force when their foot strikes the ground too far ahead of their centre of mass. 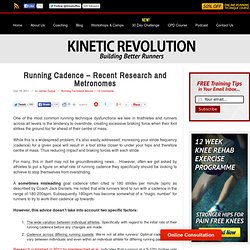 While this is a widespread problem, it’s also easily addressed: increasing your stride frequency (cadence) for a given pace will result in a foot strike closer to under your hips and therefore centre of mass. Thus reducing impact and braking forces with each stride. For many, this in itself may not be groundbreaking news… However, often we get asked by athletes to put a figure on what rate of running cadence they specifically should be looking to achieve to stop themselves from overstriding.

A sometimes misleading goal cadence often cited is 180 strides per minute (spm) as described by Coach Jack Daniels. He noted that elite runners tend to run with a cadence in the range of 180-200spm. The wide variation between individual athletes. How to Use a Metronome with Chi Running. Usain Bolt easy running. [Documentaire] Sommes-nous faits pour courir ? Are You Ready to Go Minimal? Chi Running - C Tolle Run - Episode 7. Best Running Technique part 1. 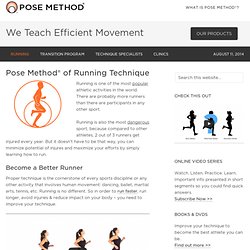 There are probably more runners than there are participants in any other sport. Running is also the most dangerous sport, because compared to other athletes, 2 out of 3 runners get injured every year. But it doesn’t have to be that way, you can minimize potential of injures and maximize your efforts by simply learning how to run. Become a Better Runner Proper technique is the cornerstone of every sports discipline or any other activity that involves human movement: dancing, ballet, martial arts, tennis, etc. The Pose model of running consists of three elements: Pose – Fall – Pull and it accepts gravity as the primary force for forward movement instead of muscular energy. Running is as Simple as Pose Running is based on the Pose Method®, where we determine the key poses. The Running Pose is a whole body pose, which vertically aligns shoulders, hips and ankles with the support leg, while standing on the ball of the foot. Stay Loose: Stretches for Runners. By Josh ClarkPosted Sunday, 31 March, 2002 There's an endless number of runners who seem perfectly able to squeeze in many hours of running every week but who just don't seem to have the time to stretch for five or ten minutes before and after. 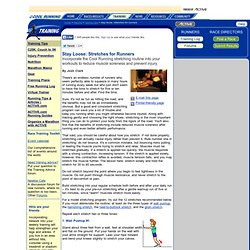 Find the time. Sure, it's not as fun as hitting the road, and the benefits may not be as immediately obvious. But a good and consistent stretching program can save you a lot of trouble and keep you running when you might otherwise become injured. Along with training gently and choosing the right shoes, stretching is the most important thing you can do to protect your body from the rigors of the road. That said, you should be careful about how you stretch. Do not stretch beyond the point where you begin to feel tightness in the muscle. Build stretching into your regular schedule both before and after your daily run -- it's best to do your pre-run stretching after a gentle warmup run of five or ten minutes, since "warm" muscles stretch more easily.