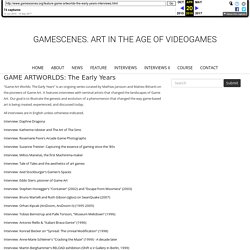 It features interviews with seminal artists that changed the landscapes of Game Art. Our goal is to illustrate the genesis and evolution of a phenomenon that changed the way game-based art is being created, experienced, and discussed today. All interviews are in English unless otherwise indicated. Interview: Daphne Dragona Interview: Katherine Isbister and The Art of The Sims. Dataspelens politiska sprängkraft 18 november kl 09:03 - Konflikt. Free Time Tracking Software. 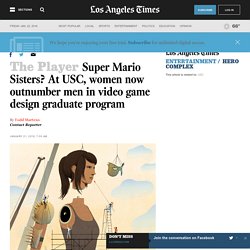 And it very well may be. The women in the USC program, ranked by Princeton Review as the nation's top place to study game design, are enrolled not just because games have changed their lives. They want to change games. The Evolution of Video Game Controllers. Making Games Art: The Designers' Manifesto. [In a likely to be controversial manifesto, the veteran developers that cluster around the Project Horseshoe invitation only mini-conference have produced a list of problems -- and solutions -- for video games' continuing strides towards the pantheon of great art.] 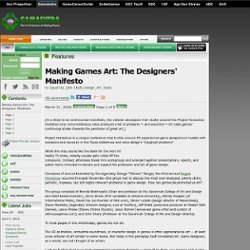 Project Horseshoe is a unique conference that invites around 50 experienced game designers to huddle with scorpions and raccoons in the Texas wilderness and solve design's "toughest problems". While this may sound like the basis for the next hit reality TV show, nobody usually gets voted off the compound. Instead, attendees break into workgroups and wrangle together presentations, reports, and action items intended to elevate and expand the profession and art of game design. Conceived of and orchestrated by the legendary George "Fatman" Sanger, the third annual Project Horseshoe occurred this past November. To most people in the world today, games are not art. The Necessity Of Interactive Animation For Games. [In this in-depth article, Arkane and Streamline Studios animator Moleman discusses why he believes that body language and facial expression are the keys to making our games feel more vibrant.] 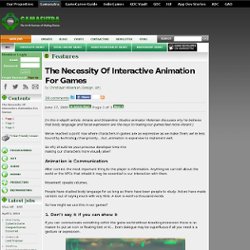 We've reached a point now where characters in games are as expressive as we make them; we're less bound by technology than priority... but, animation is expensive to implement well. So why should we pour precious developer time into making our characters more visually alive? After control, the most important thing to the player is information. Turn Your Human Face Into A Video Game Character. But for indie studios who can't afford that kind of thing, this is a godsend. 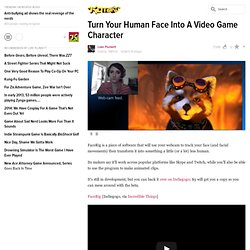 Having a moving, voice-synced portrait while NPCs give you quest details, or even just dump exposition, all at a dirt-cheap price is pretty great. it sure is affordable, I am just saying, can't replace refined animation. Hearthstone dev invents stories that tell themselves. Avatar Days. Playing Video Games Is Good For Your Brain – Here’s How. Whether playing video games has negative effects is something that has been debated for 30 years, in much the same way that rock and roll, television, and even the novel faced much the same criticisms in their time. 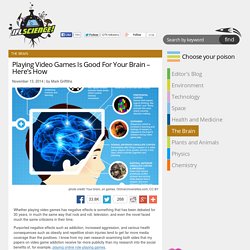 Purported negative effects such as addiction, increased aggression, and various health consequences such as obesity and repetitive strain injuries tend to get far more media coverage than the positives. I know from my own research examining both sides that my papers on video game addiction receive far more publicity than my research into the social benefits of, for example, playing online role-playing games.

However there is now a wealth of research which shows that video games can be put to educational and therapeutic uses, as well as many studies which reveal how playing video games can improve reaction times and hand-eye co-ordination. In another experiment, they trained gamers that had little previous experience of playing action games, giving them 50 hours practice. Dr. How Gaming Impacts Childrens' Academic Achievements. A new report published by the National Children's Bureau (NCB), a UK educational charity, has received extensive coverage in the media as clear evidence that video games are "bad" for children. 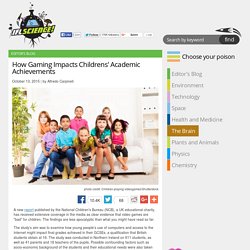 The findings are less apocalyptic than what you might have read so far. The study's aim was to examine how young people’s use of computers and access to the Internet might impact final grades achieved in their GCSEs, a qualification that British students obtain at 16. The study was conducted in Northern Ireland on 611 students, as well as 41 parents and 18 teachers of the pupils. Possible confounding factors such as socio-economic background of the students and their educational needs were also taken into account.

Students benefit from having a computer and being familiar with the software, the study confirms. The report goes on to analyze different aspects of information and communication technology. Beyond the shoot-em-up: how gaming got killer stories. In Invasion of the Space Invaders, Martin Amis's 1982 treatise on the emergent video game medium, the British author wrote: "The video game tells a story. 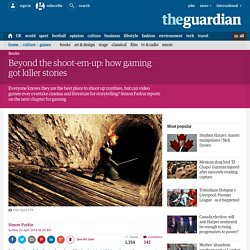 The better you get, the longer the story lasts. And we all know how children feel about stories. " How interactive technology is transforming storytelling. Let me begin by saying: reports of the death of the book are wildly exaggerated. 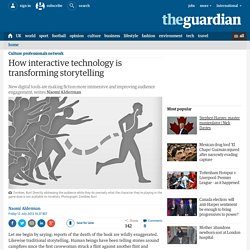 Likewise traditional storytelling. Human beings have been telling stories around campfires since the first cavewoman struck a flint against another flint and noticed that an interesting spark flew off. Stories aren't going anywhere and nor is the visceral, inexplicable, bone-deep shivery delight of a good tale well told. This Might Be the Most Beautiful iPad Game of 2014.

Monument Valley is an iPad game from Ustwo that draws on the puzzle-like principles of M.C. 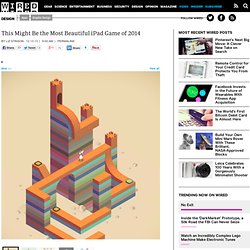 Escher drawings. Image: Ustwo Players guide Ida, their avatar, through architectural labyrinths in order to progress to the next level. Fun Pastimes for Stupid Children » not even kidding about any of this. Not even kidding about any of this So… another week, another story of a woman in gaming being ridiculed, or belittled, or threatened with rape, or just piled on by a horde of people who really aren’t very good people at all. It happens, and it happens a lot. It makes me pretty angry. I am, of course, speaking only for myself, not my employer. Manifesto: The 21st Century Will Be Defined By Games.

Previous centuries have been defined by novels and cinema. In a bold manifesto we’re proud to debut here on Kotaku, game designer Eric Zimmerman states that this century will be defined by games.ore Below is Zimmerman’s manifesto, which will also appear in the upcoming book The Gameful World from MIT press. We invite you to read it, to think about it and even to annotate it. Zimmerman’s manifesto is followed by an exploration of the ideas behind it, in an essay by author and professor Heather Chaplin. In the days to come, we’ll be expanding the discussion even further with perspectives from other gamers and game-thinkers. Eric zimmerman · essays. These essays are a selected sampling of the writing I’ve done over the last several years, arranged in rough chronological order.

I have yet to add essays from the last few years. Most of these writings are not formal academic essays with proper references. If you’re looking for a good bibliography, there’s a very long one in Rules of Play. A Bill of Rights for Game Developers (2005) This intentionally provocative thinkpiece was originally published for the International Game Developers Association website and subsequently as a feature at the game developer community site gamasutra.com. Based on a keynote talk I gave at the Montreal International Game Summit, it caused a bit of stir when published, although not as much as I would have liked.

Plan it Green: The big Switch is exactly what its title says: an eco-friendly game with a serious dimension in it. The lesson that National Geographic teaches takes the player a step further than those normally learned at school. Built on a multi-player online platform, Plan it Green teaches about energy technology and better energy future. Games. 20 best designs in video games. Welcome to Flow in Games. Motivate. Play. - Aurora. Deft and intuitive player character movement in a 2D platformer. Www.goodgamesbydesign.com/Files/WhyGamesWork_TheScienceOfLearning_CMurphy_2011.pdf.