I Recreated Neopets Food, 20 Years Later. Dungeons & Deceptions: The First D&D Players Push Back On The Legend Of Gary Gygax. Games That Changed Everything: The Most WIRED Titles of the Generation. The PlayStation 4 already is in the hands of more than a million gamers and the magical (when it works) Xbox One is coming soon. 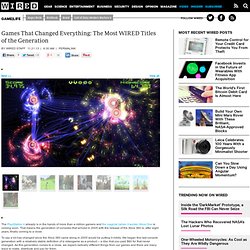 That means the generation of consoles that arrived in 2005 with the release of the Xbox 360 is, after eight years, finally coming to a close. To say a lot has changed since the Xbox 360 came along in 2005 would be putting it mildly. We began this last console generation with a relatively stable definition of a videogame as a product -- a disc that you paid $60 for that never changed. As this generation comes to a close, we expect radically different things from our games and there are many ways to make, distribute and pay for them. How a Small Group of Devotees Are Saving Neopets From Extinction. The 2013 update of Tyrannia, an ancient civilization listed as one of the 19 official lands in Neopia. 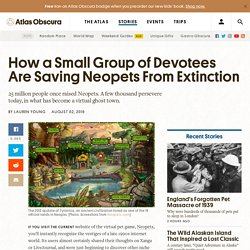 [Photo: Screeshots from Neopets.com] If you visit the current website of the virtual pet game, Neopets, you’ll instantly recognize the vestiges of a late 1990s internet world. Its users almost certainly shared their thoughts on Xanga or LiveJournal, and were just beginning to discover other niche online communities through a year-old company called Google. Clicking through the Neopets world known as Neopia is like going back in an internet time machine. The bright Crayola yellow backdrop, the bubbly space font, and the cute cartoon pets are remnants of the early web—their cheerful style unfazed by time. Neopets users have now been training and taking care of their pets for 17 years. 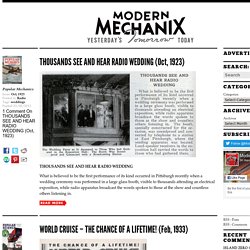 J. Starting at the New Jersey end of the Holland vehicular tunnel, its steel-and-concrete viaduct soars across rivers, marshes and crossroads to permit high-speed motor traffic. Farewell to the ugly cigarette.Smoke pretty. eve.Hello to Eve. Suffragette board game up for auction. Image copyright Hansons A suffragette-themed board game, where players would "dodge the police", is set to go under the hammer. 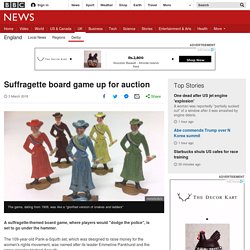 The 109-year-old Pank-a-Squith set, which was designed to raise money for the women's rights movement, was named after its leader Emmeline Pankhurst and the prime minister Herbert Asquith. It was discovered at an antiques event in Warwickshire and will be auctioned in Derbyshire later this month. The suffragettes campaigned 100 years ago to grant women the right to vote. UK women's vote centenary The board game was first advertised in the Votes for Women newspaper on 22 October 1909. It was distributed and sold through a network of shops run by the Women's Social and Political Union. Valuer John Keightley found the game at an event held by Hansons Auctioneers in Alveston, Stratford. He said: "It's a wonderful find. Tale of Tales - videogames. Formed in 2009, the Archive Team (not to be confused with the archive.org Archive-It Team) is a rogue archivist collective dedicated to saving copies of rapidly dying or deleted websites for the sake of history and digital heritage. 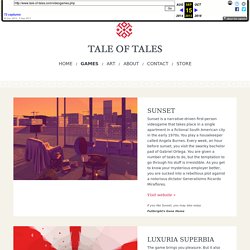 The group is 100% composed of volunteers and interested parties, and has expanded into a large amount of related projects for saving online and digital history. History is littered with hundreds of conflicts over the future of a community, group, location or business that were "resolved" when one of the parties stepped ahead and destroyed what was there.

With the original point of contention destroyed, the debates would fall to the wayside. Archive Team believes that by duplicated condemned data, the conversation and debate can continue, as well as the richness and insight gained by keeping the materials. The main site for Archive Team is at archiveteam.org and contains up to the date information on various projects, manifestos, plans and walkthroughs. Top 10 Most Influential Women in Game Development - Computer & Console Gaming - Products. While my inner feminist wants to launch into a tirade about how International Women's Day is a pointless corporate gimmick and how our time would be better spent helping solve the real-world systemic oppression and microaggressions women face everywhere, I can't deny it's a little bit awesome that there is one day in the year that's all about celebrating women, their lives, and everything they bring to this world. 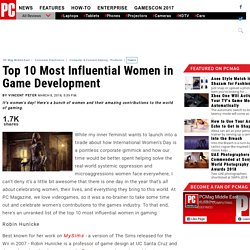 At PC Magazine, we love videogames, so it was a no-brainer to take some time out and celebrate women's contributions to the games industry. To that end, here's an unranked list of the top 10 most influential women in gaming: Robin Hunicke. Ancient Games: Crash Course Games #2.