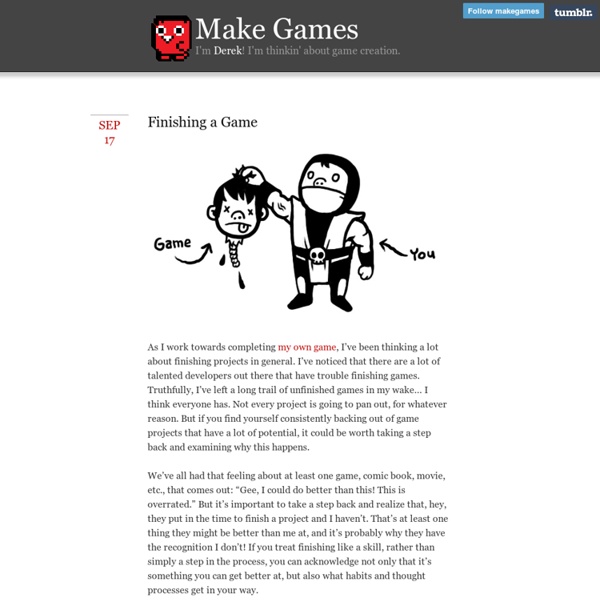 Deft and intuitive player character movement in a 2D platformer Recently, I released Empty Black, my 2D shooter/puzzler/platformer. In this article, I’ll describe how I made the player movement deft and intuitive. Play the game before you read on, so you’ll know what I’m talking about. My general approach was to change something, then try it out. BASIC Gaming - Issue #3 Witchcraft Adventure developed by N3trunn3r Written by Lachie Dazdarian (November, 2011) Introduction Witchcraft Adventure is a first-person view dungeon crawler, Dungeon Master-style, but it introduces a novel idea by featuring a top-down view mode that switches on when the player dies. What Indie Developers Can Learn from Minecraft news - Frozen Synapse Game We take a look at this phenomenon and ask what it means for our business, as well as that of other indie developers... Like most indie devs, I'm a bit tired of hearing about Minecraft at the moment! I thought I would collate my thoughts on it in order to put the issue to bed. I'll be viewing everything through a commercial lens rather than focussing on the design, although in this case I think the two are almost symbiotic.

How To Create Your First iPhone Application Update: 01/10/2012: The original version of this article by Jen Gordon was published in August 2009. It was thoroughly revised and updated by the author in September 2012. — Editorial Team Since the iTunes App Store launched in 2008, over 500,000 apps have been approved by Apple, and thousands more app ideas are scrawled on napkins across the world every day. But question remains, how can a person with limited technical skills create an iPhone app? Manifesto: The 21st Century Will Be Defined By Games Previous centuries have been defined by novels and cinema. In a bold manifesto we’re proud to debut here on Kotaku, game designer Eric Zimmerman states that this century will be defined by games.ore Below is Zimmerman’s manifesto, which will also appear in the upcoming book The Gameful World from MIT press.

Make video games - The complete free tutorial Okay so you want to make your own video game. You have creative ideas just bursting from your ears and you have got to make these ideas reality. Well I have got two things to say about that. The first thing is that it is totally possible!

Fun Pastimes for Stupid Children » not even kidding about any of this not even kidding about any of this So… another week, another story of a woman in gaming being ridiculed, or belittled, or threatened with rape, or just piled on by a horde of people who really aren’t very good people at all. It happens, and it happens a lot. It makes me pretty angry. I am, of course, speaking only for myself, not my employer. Tutorial: Basic Game Design · LaurentGomila/SFML Wiki So you have a new game idea and want to see it come to life but are not sure where to start. This tutorial is intended to guide you through the process of turning your new game idea into a basic game design and get you well on the path of bringing your game to life. If while reading this tutorial you find things that are completely wrong or could be improved, please don't hesitate to fix the tutorial. This tutorial is based on years of experience in designing my own games for fun and reviewing the code bases of the PopCap and PlayFirst game engines and other tutorials online.

This Might Be the Most Beautiful iPad Game of 2014 Monument Valley is an iPad game from Ustwo that draws on the puzzle-like principles of M.C. Escher drawings. Image: Ustwo Players guide Ida, their avatar, through architectural labyrinths in order to progress to the next level. Image: Ustwo In order to beat the levels, Ida has to defy practical laws of physics. Image: Ustwo

Game Design Tutorials » Level 99 Games This page contains of list of the game design tutorial series, written gradually by D. Brad Talton Jr. over the past few years. Brad is the designer of BattleCON, Pixel Tactics, the Minigame Library 2013, and many other games. These articles contain some of his thoughts and ideas on the topics of game design, as well as logs of the design process for specific games. An ongoing blog about the development of Millennium Blades, an upcoming standalone card game that simulates the feel and play of a CCG. Conception of a Board Game – How the game idea comes together and becomes the basis for a brand new game.The Adventure Continues - Info about prototyping, building, and testing Millennium Blades–how the concept of the game is converted into a working prototype.Beyond Game Design - What do you do once you’ve decided that you’re going to publish a game?