Why Tesla's battery for your home should terrify utilities 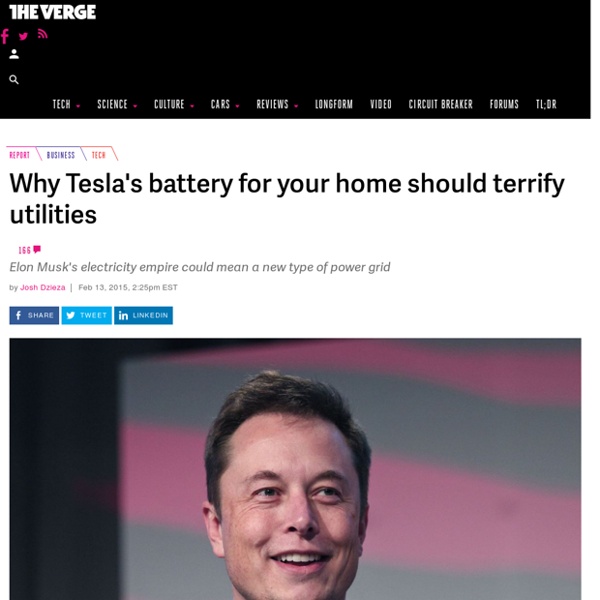 Earlier this week, during a disappointing Tesla earnings call, Elon Musk mentioned in passing that he’d be producing a stationary battery for powering the home in the next few months. It sounded like a throwaway side project from someone who’s never seen a side project he doesn’t like. But it’s a very smart move, and one that’s more central to Musk’s ambitions than it might seem. To understand why, it helps to look not at Tesla, but at SolarCity, a company chaired by Musk and run by his cousin Lyndon Rive. SolarCity installs panels on people’s roofs, leases them for less than they’d be paying in energy bills, and sells surplus energy back to the local utility. It’s proven a tremendously successful model. When you have a lot of solar, you need a lot of batteries Fueled by financing systems like SolarCity’s, government subsidies, and a rapid drop in the price of photovoltaics, solar has been growing fast. Forecast storage market from GTM Research. "I might love batteries more than cars."

Off-Grid Power Off Grid System This section is dedicated to off-grid power as well as back up power systems. Articles: Brooks Solar Living Off Grid – 12/10/2010 How to Set up an Urban Permaculture Garden The Permaculture Neighbourhood Centre in California feeds the community whilst teaching people how to turn urban lots into edible oases. The garden is just 1/3 of an acre and is filled with edibles and plants beneficial to wildlife. It has been consciously designed to address issues of food security, environmental degradation, water scarcity and more!

Tesla releases details of its solar roof tiles: cheaper than regular roof with ‘infinity warranty’ and 30 yrs of solar power Tesla released today all the information to order its new solar roof tiles products – starting with the smooth black glass tiles and the textured glass tiles, as reported earlier today. Of course, the most important information that people were waiting for is price. CEO Elon Musk first hinted that it would be cheaper than a regular roof after accounting for energy savings, and later said that Tesla’s solar roof could cost less than a regular roof – even before energy production. Tesla pretty much delivered on both depending on how you look at it.

Tesla's new product is a battery for your home - May. 1, 2015 Tesla is calling the rechargeable lithium-ion battery the "Powerwall." As the name suggests, the unit is designed to be mounted on a wall, and connected to the local power grid. It will be sold to installers for $3,500 for 10kWh, and $3,000 for 7kWh. Zeer Pot Instructable - Simple Off Grid Refrigeration Technique Transforms Food Storage In Africa If you found yourself stuck without power following a hurricane, earthquake, or other disaster, there is no reason anyone should be without this kind of knowledge. In this day and age where we can share the knowledge around, I love this idea. Be sure to watch the video on its use and effictiveness as well on the second page of this article, and share it around to all of your loved ones. A zeer pot is an evaporative cooler used in rural Africa and the Middle East to keep vegetables fresh.

Solar Is Being Held Back by Regulations, Not Technology Due to the drop in costs for solar technology and increases in electric utility rates, solar photovoltaic-generated electricity is now less expensive than grid electricity, and adoption is rising rapidly throughout the U.S. In fact, Bloomberg reported that the American solar industry had a record first quarter in 2016, and for the first time, it drove the majority of new power generation. As I previously wrote, the U.S. solar industry is now creating enough jobs (hiring new workers 12 times faster than the overall economy) that it could actually absorb all the coal jobs that would be lost if the coal industry was completely shut down.

Tesla: World's biggest battery half-built Image copyright Tesla Tesla has reached the half-way point in its plan to build the world's biggest battery, in South Australia. The plan to build the 100MW (129MWh) lithium battery grew out of a Twitter bet between Tesla boss Elon Musk and Australian software entrepreneur Mike Cannon-Brookes. Mr Musk said Tesla would build the wind-charged battery in 100 days or the state would not have to pay for it. Trying out the SunRocket Solar Kettle - Living Big In A Tiny House In our Tiny House, we are going to be completely off grid. For that reason, we are especially interested in anything that will help us to save energy and fuel. We’ve been really interested in solar cooking for a while, and when we stumbled upon the SunRocket Solar Kettle, we were really keen to give it a go. The good people at Solar Cooking Australia sent us one to try out, and this is what happened.

NSA Spying Wins Another Rubber Stamp February 27, 2015 A federal court has again renewed an order allowing the National Security Agency to continue its bulk collection of Americans' phone records, a decision that comes more than a year after President Obama pledged to end the controversial program. The Foreign Intelligence Surveillance Court approved this week a government request to keep the NSA's mass surveillance of U.S. phone metadata operating until June 1, coinciding with when the legal authority for the program is set to expire in Congress. The extension is the fifth of its kind since Obama said he would effectively end the Snowden-exposed program as it currently exists during a major policy speech in January 2014. Obama and senior administration officials have repeatedly insisted that they will not act alone to end the program without Congress. More than a year's worth of efforts to reform the NSA stalled last year, as the Senate came two votes short of advancing the USA Freedom Act in November.

Solar has the brightest sustainable energy future. Here's why Humans consume 221 tonnes of coal, 1,066 barrels of oil, and 93,000 metric cubes of natural gas per second. These materials were wonderful for the industrial revolution that started in Britain in the 18th century and made use of “new energy” sources such as coal and petroleum. At the start of the 21st century, however, it’s time to reassess the notion of “new energy”. Fossil fuels have no place in any long-term sustainable energy solution for the planet. It needs to be replaced with renewable energy sources. But which ones? Tesla's solar and battery project in Hawaii: we do the math Tesla’s summer announcement of the world’s biggest battery-storage system in South Australia characteristically kept key details confidential. Fortunately, while mystery and mystique still shroud that project, more can be unearthed or inferred for Tesla's solar panel and battery energy-storage deployment in Kauai, Hawaii, which came online earlier this year. In fact, there's now enough information that—to paraphrase Elon Musk—we can do the math. Inspiring math it is, too. DON'T MISS: Tesla's battery farm on Kauai opens, large-scale solar energy for Hawaii