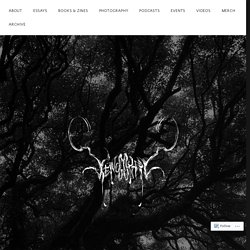 Dominic Fox, whose book Cold World I bought shortly after writing that post (and I enjoyed it very much), pointed to some further posts of his own exploring Black Metal and its resonance with weird theory discussions from around 2007. Back in October, on a Xasthur kick, I pulled together some old K-Punk posts where Mark was drawn into a discussion about Xasthur’s album Subliminal Genocide after one commenter referred to it as being hauntological.

Dominic’s posts expand on this and Xasthur’s appearances in his book. He writes in “Paint the Devil on the Wall” I can’t go along with attempts to christen this stuff “metal’s own Burial” — it’s too saturated and airless for that. I had my own experience of this, falling asleep to Subliminal Genocide on an early morning bus journey from London to Bristol last summer. Shine on you crazy garden. From the zurau aphorisms. The past. Hauntology resurrected. Spectres never truly vanish, and hauntology’s modus operandi is precisely the spectral realm. 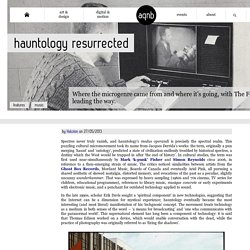 This puzzling cultural micromovement took its name from Jacques Derrida’s works: the term, originally a pun merging ‘haunt’ and ‘ontology’, predicted a state of civilization endlessly troubled by historical spectres, a destiny which the West would be trapped in after ‘the end of history’. In cultural studies, the term was first used near-simultaneously by Mark ‘k-punk’ Fisher and Simon Reynolds circa 2006, in reference to a then-emerging strain of music. The critics noticed similarities between artists from the Ghost Box Records, Mordant Music, Boards of Canada and eventually Ariel Pink, all pursuing a shared aesthetic of skewed nostalgia, distorted memory, and evocations of the past as a peculiar, slightly uncanny wunderkammer. 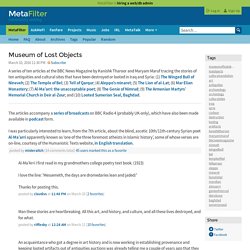 Newer » This thread has been archived and is closed to new comments. Welcome to Scarfolk Council, an eerie alternate reality imagined in blog form. Some places feel as if they’re stuck in a timewarp—bucolic little villages that look like they’re straight out of Lord of the Rings. 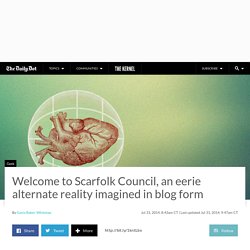 Scarfolk is one such town, although it’s less Lord of the Rings and more The Wicker Man. According to the Scarfolk Council blog, Scarfolk is a town in northwest England that is permanently stuck in the 1970s, reliving the decade over and over again. Like archaeologists investigating a long-dead culture, we are invited to inspect Scarfolk through the lense of various grotesque vintage posters, newsletters, and magazine covers. “Here in Scarfolk, pagan rituals blend seamlessly with science,” the blog helpfully explains.

Hronir. Le pool *Hauntology* M.R. James and the Quantum Vampire. Many thanks to the author for kind permission to reprint this essay. 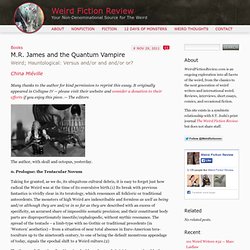 It originally appeared in Collapse IV — please visit their website and consider a donation to their efforts if you enjoy this piece. — The editors The author, with skull and octopus, yesterday. 0. Prologue: the Tentacular Novum Taking for granted, as we do, its ubiquitous cultural debris, it is easy to forget just how radical the Weird was at the time of its convulsive birth.(1) Its break with previous fantastics is vividly clear in its teratology, which renounces all folkloric or traditional antecedents.

Tinker haunted tailor. (via Father Theo's Blog) The new movie Tinker Tailor Soldier Spy is so clearly an artifact of the present moment, even in its faithfulness to its Cold War period detail, that i call it a hauntological monument. We revel in the squalor of postwar Great Britain; the crudeness of the tactics of espionage in that era makes us more tinglingly aware of how far we have come in surveillance abilities now; and that paranoia echoes our present one in curious & not-always-ironic ways. Matt's been there. Badly reproduced photos as used in books of a certain era--between the exquisite engravings of the Victorians, & the better quality pictures that soon followed.

A troubling interlude: & i imagine our crazy quilt of webpage presence to become something just as era-delimited, & as brief. A long new addition to the sometimes inconsequential, long running hauntological blogosphere. (via) K-punk: Hauntology Now. Hauntology: The Past Inside The Present. Luc Tuymans, The Valley, 2007. 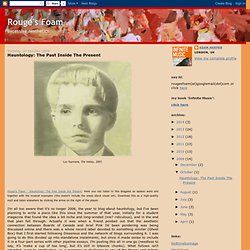 Rouge's Foam - Hauntology: The Past Inside the Present. Here you can listen to this blogpost as spoken word and together with the musical examples (this doesn't include the areas about visual art). Weird Britain in Exile: Ghost Box, Hauntology, and Alternative Heritage. Weird Britain in Exile: Ghost Box,Hauntology, and Alternative Heritage Jamie Sexton This article interrogates some of the themes that have been noted in the critical receptionof the musical movement that has been dubbed “hauntology.” 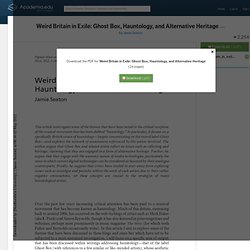 In particular, it focuses on aspeciﬁcally British strain of hauntology—largely concentrating on the record label Ghost Box—and explores the network of associations referenced by the artists involved. Theauthor argues that Ghost Box and related artists reﬂect on issues such as collecting and heritage, claiming that they are engaged in a form of alternative heritage. Further, heargues that they engage with the uncanny nature of media technologies, particularly thesense in which current digital technologies can be considered as haunted by their analoguecounterparts. Over the past few years increasing critical attention has been paid to a musicalmovement that has become known as hauntology.