Ba'athism. The two Ba'athist states which have existed (Iraq and Syria) forbade criticism of their ideology through authoritarian governance. 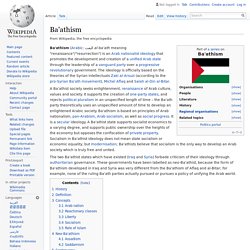 These governments have been labelled as neo-Ba'athist, because the form of Ba'athism developed in Iraq and Syria was very different from the Ba'athism of Aflaq and al-Bitar; for example, none of the ruling Ba'ath parties actually pursued or pursues a policy of unifying the Arab world. History[edit] Zaki al-Arsuzi, the politician who influenced Ba'athist thought. After the Ba'ath Party splintered, he became the chief ideologist of the Syrian-dominated Ba'ath Party.

The origins of Ba'athism began with the political thought developed by Zaki al-Arsuzi and Michel Aflaq. Arsuzi formed the Arab Ba'ath Party in 1940 and his views influenced Aflaq who, alongside junior partner Salah al-Din al-Bitar, founded the Arab Ihya Movement in 1940 that later renamed itself the Arab Ba'ath Movement in 1943. Definition[edit] Concepts[edit] Arab nation[edit] Michel Aflaq. Michel Aflaq (Arabic: ميشيل عفلق‎‎, 1910 – 23 June 1989) was a Syrian philosopher, sociologist and Arab nationalist. 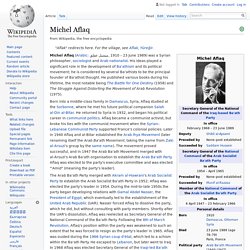 His ideas played a significant role in the development of Ba'athism and its political movement; he is considered by several Ba'athists to be the principal founder of Ba'athist thought. He published various books during his lifetime, the most notable being The Battle for One Destiny (1958) and The Struggle Against Distorting the Movement of Arab Revolution (1975). Born into a middle-class family in Damascus, Syria, Aflaq studied at the Sorbonne, where he met his future political companion Salah al-Din al-Bitar. He returned to Syria in 1932, and began his political career in communist politics. Aflaq became a communist activist, but broke his ties with the communist movement when the Syrian–Lebanese Communist Party supported France's colonial policies.

Early life: 1910–1939[edit] Deobandi. Deobandi (Pashto and Persian: دیو بندی‎‎, Urdu: دیو بندی‎, Bengali: দেওবন্দ, Hindi: देवबन्दी) is a revivalist movement within Sunni (primarily Hanafi) Islam.[1] It is centered in India, Pakistan, Afghanistan and Bangladesh, has recently spread to the United Kingdom, and has a presence in South Africa.[2] The name derives from Deoband, India, where the school Darul Uloom Deoband is situated. 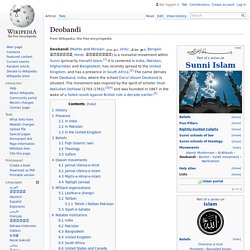 The movement was inspired by the spirit of scholar Shah Waliullah Dehlawi (1703–1762),[3][4] and was founded in 1867 in the wake of a failed revolt against British rule a decade earlier.[5] Muhammad Ali Jinnah. Born in Karachi and trained as a barrister at Lincoln's Inn in London, Jinnah rose to prominence in the Indian National Congress in the first two decades of the 20th century. 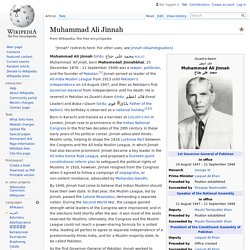 In these early years of his political career, Jinnah advocated Hindu–Muslim unity, helping to shape the 1916 Lucknow Pact between the Congress and the All-India Muslim League, in which Jinnah had also become prominent. Jinnah became a key leader in the All India Home Rule League, and proposed a fourteen-point constitutional reform plan to safeguard the political rights of Muslims. In 1920, however, Jinnah resigned from the Congress when it agreed to follow a campaign of satyagraha, or non-violent resistance, advocated by Mohandas Gandhi. By 1940, Jinnah had come to believe that Indian Muslims should have their own state. Amanullah Khan. Early years[edit] 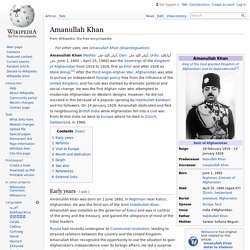 Anglo-Soviet invasion of Iran. Background[edit] In 1925, after years of civil war, turmoil and foreign intervention, Persia was unified under the rule of Reza Khan, who crowned himself to become Rezā Shāh that same year. 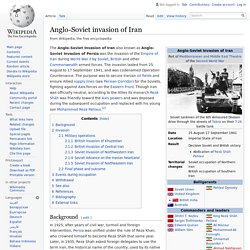 Later, in 1935, Reza Shah asked foreign delegates to use the term Iran, the historical name of the country, used by its native people, in formal correspondence. Rezā Shāh set on an ambitious program of economic, cultural, and military modernisation. Reza Shah. Reza Shah Pahlavi (Persian: رضا شاه پهلوی‎‎; pronounced [reˈzɑː ˈʃɑːhe pæhlæˈviː]) (15 March 1878 – 26 July 1944), was the Shah of Iran (Persia) from 15 December 1925 until he was forced to abdicate by the Anglo-Soviet invasion of Iran on 16 September 1941.[3] 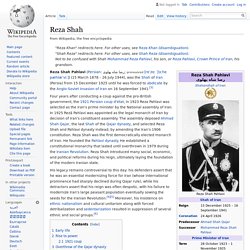 Kemalism. Kemalism (Turkish: Kemalizm), also known as Atatürkism (Turkish: Atatürkçülük, Atatürkçü düşünce), or the Six Arrows (Turkish: Altı ok), is the founding ideology of the Republic of Turkey.[1] Kemalism, as it was implemented by Mustafa Kemal Atatürk, was defined by sweeping political, social, cultural and religious reforms designed to separate the new Turkish state from its Ottoman predecessor and embrace a Westernized way of living,[2] including the establishment of democracy, civil and political equality for women, secularism, state support of the sciences and free education, many of which were first introduced to Turkey during Atatürk's presidency in his reforms.[3] Philosophy[edit] Kemalism is a modernization philosophy which guided the transition between multi-religious, multi-ethnic Ottoman Empire to the secular, unitary Republic of Turkey. 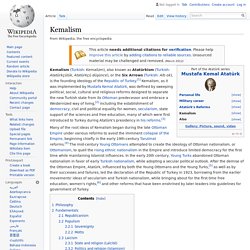 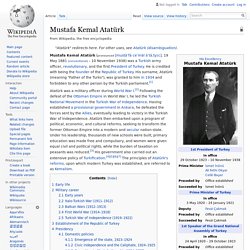 He is credited with being the founder of the Republic of Turkey. His surname, Atatürk (meaning "Father of the Turks"), was granted to him in 1934 and forbidden to any other person by the Turkish parliament.[1] Abolition of the Ottoman sultanate. Committee of Union and Progress. Three Pashas. The "Three Pashas" (Turkish: Üç Paşalar, also known as the "dictatorial triumvirate") of the Ottoman Empire refers to the Grand Vizier (prime minister) and Minister of the Interior, Mehmed Talaat Pasha (1874–1921); the Minister of War, Ismail Enver Pasha (1881–1922); and the Minister of the Navy, Ahmed Djemal Pasha (1872–1922). 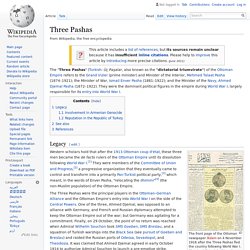 They were the dominant political figures in the empire during World War I, largely responsible for its entry into World War I. Young Turks. Farouk of Egypt. King Farouk (Arabic: فاروق الأول ‎ Fārūq al-Awwal, Turkish: I. Faruk; 11 February 1920 – 18 March 1965 [45 years]) was the tenth ruler of Egypt from the Muhammad Ali Dynasty and the penultimate King of Egypt and the Sudan, succeeding his father, Fuad I, in 1936.[3] His full title was "His Majesty Farouk I, by the grace of God, King of Egypt and the Sudan, Sovereign of Nubia, of Kordofan and of Darfur".

He was overthrown in the military coup of 1952]] and forced to abdicate in favor of his infant son Ahmed Fuad, who succeeded him as Fuad II. He died in exile in Italy. His sister Princess Fawzia Fuad was the first wife and Queen consort of the Shah of Iran Mohammad Reza Pahlavi.[4] Early life and education[edit] In addition to his sisters, Fawzia, Faiza, Faika and Fathia,[10] he had two half-siblings from his father's previous marriage to Princess Shwikar Khanum Effendi.

Egyptian Revolution of 1952. The revolution was faced with immediate threats from Western imperial powers, particularly the United Kingdom, which had occupied Egypt since 1882, and France, both of whom were wary of rising nationalist sentiment in territories under their control throughout the Arab world, and Africa. The ongoing state of war with Israel also posed a serious challenge, as the Free Officers increased Egypt's already strong support of the Palestinians. These two issues conflated four years after the revolution when Egypt was invaded by Britain, France, and Israel in the Suez Crisis of 1956. Despite enormous military losses, the war was seen as a political victory for Egypt, especially as it left the Suez Canal in uncontested Egyptian control for the first time since 1875, erasing what was seen as a mark of national humiliation. This strengthened the appeal of the revolution in other Arab and African countries. Causes[edit]

Al-Qaeda in the Arabian Peninsula. History of Yemen. Sabaean inscription addressed to the moon-god Almaqah, mentioning five South Arabian gods, two reigning sovereigns and two governors, 7th century BC. Yemen is one of the oldest centers of civilization in the Near East.[1] Its relatively fertile land and adequate rainfall in a moister climate helped sustain a stable population, a feature recognized by the ancient Greek geographer Ptolemy, who described Yemen as Eudaimon Arabia (better known in its Latin translation, Arabia Felix) meaning "fortunate Arabia" or Happy Arabia. Some scholars[who?] Believe that Yemen remains the only region in the world that is exclusively Semitic, meaning that Yemen historically did not have any non-Semitic-speaking people.

Yemeni Semites derived their Musnad script by the 12th to 8th centuries BC, which explains why most historians date all of the ancient Yemeni kingdoms to the 12th to 8th centuries BC. Ancient history[edit] Southern Movement. Yemeni Revolution. Hussein Badreddin al-Houthi. Personal life[edit] Houthis. Not to be confused with Hutu. The Houthis (Arabic: الحوثيون‎ al-Ḥūthiyyūn), officially called Ansar Allah (anṣār allāh أنصار الله "Supporters of God"), is a Zaidi Shia-led movement from Sa'dah, northern Yemen. The group was founded by Hussein Badreddin al-Houthi[19] who started a rebellion in 2004 which led to a Houthi insurgency in Yemen against President, Ali Abdullah Saleh.