How to Optimize Your Brain: Why Refining Emotional Recall is the Secret to Better Memory 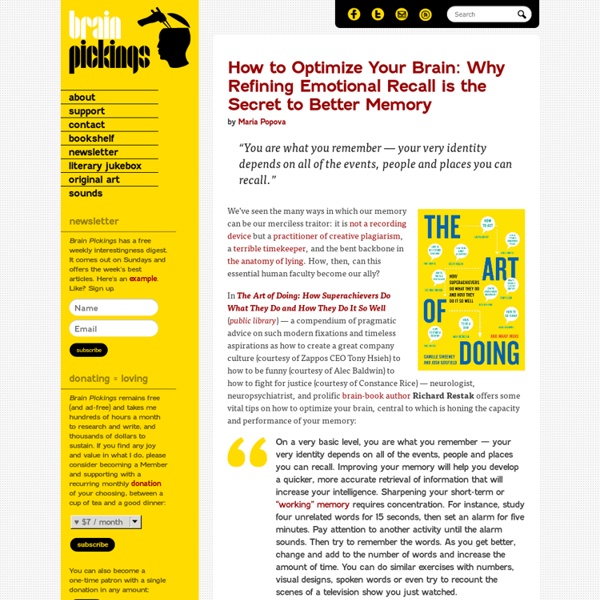 by Maria Popova “You are what you remember — your very identity depends on all of the events, people and places you can recall.” We’ve seen the many ways in which our memory can be our merciless traitor: it is not a recording device but a practitioner of creative plagiarism, a terrible timekeeper, and the bent backbone in the anatomy of lying. How, then, can this essential human faculty become our ally? In The Art of Doing: How Superachievers Do What They Do and How They Do It So Well (public library) — a compendium of pragmatic advice on such modern fixations and timeless aspirations as how to create a great company culture (courtesy of Zappos CEO Tony Hsieh) to how to be funny (courtesy of Alec Baldwin) to how to fight for justice (courtesy of Constance Rice) — neurologist, neuropsychiatrist, and prolific brain-book author Richard Restak offers some vital tips on how to optimize your brain, central to which is honing the capacity and performance of your memory: Donating = Loving

Taking Notes by Hand Benefits Recall, Researchers Find – Wired Campus - Blogs Distractions posed by laptops in the classroom have been a common concern, but new research suggests that even if laptops are used strictly to take notes, typing notes hinders students’ academic performance compared with writing notes on paper with a pen or pencil. Daniel M. Oppenheimer, an associate professor of psychology at the University of California at Los Angeles, and Pam Mueller, a graduate student at Princeton University, studied the effects of students’ note-taking preferences. Their findings will be published in a paper in Psychological Science called “The Pen Is Mightier Than the Keyboard: Advantages of Longhand Over Laptop Note-Taking.” The researchers’ goal was to figure out whether typing notes—which is becoming increasingly popular—has any direct effect on a students’ ability to understand a lecture. In a series of studies, the researchers provided students with laptops or with pen and paper to take notes. Return to Top

Vintage data visualization: 35 examples from before the Digital Era This is a guest post by Tiago Veloso, the founder of Visual Loop, a collaborative digital environment for everything related to information design and data visualization. He lives in Brazil, and you can connect with him online on Twitter and LinkedIn. If you follow us regularly on Visual Loop, you’ve probably noticed we like to featured not only modern interactive visualizations and infographics, but also examples from the past, from the time when there were no computer softwares to help analyzing and designing and no Internet to access and share data. Graphics, charts, diagrams and visual data representations have been published on books, newspapers and magazines since they exist, not to mention old maps and scientific illustrations, and despite the lack of tools such as the ones we have at our disposal nowadays, they are as inspiring and important as the best contemporary visualizations. A Map of Physics (1939) (A 1939 Map of Physics) (Via Strange Maps) (image:John Snow,1854 ) (image:P.

Eight Habits that Improve Cognitive Function Digital games are incapable of giving the entire brain a full workout. These digital programs can't really exercise the cerebellum (Latin: "Little Brain") and, therefore, are literally only training half your brain. These "brain-training workouts" are the equivalent of only ever doing upper body workouts, without ever working out your lower body. Although the cerebellum is only 10 percent of brain volume, it houses over 50 percent of the brain's total neurons. Brain-Training Games Increase Sedentary Screen Time In the recent New York Times article, Tara Parker-Pope concludes that, “While there is no real risk to participating in the many unproven brain-training games available online and through smartphones, experts say, consumers should know that the scientific jury is still out on whether they are really boosting brain health or just paying hundreds of dollars to get better at a game.” Eight Habits that Improve Cognitive Function 1. 2. 3. 4. 5. 6. 7. 8.

Lectures Aren't Just Boring, They're Ineffective, Too, Study Finds Are your lectures droning on? Change it up every 10 minutes with more active teaching techniques and more students will succeed, researchers say. A new study finds that undergraduate students in classes with traditional stand-and-deliver lectures are 1.5 times more likely to fail than students in classes that use more stimulating, so-called active learning methods. “Universities were founded in Western Europe in 1050 and lecturing has been the predominant form of teaching ever since,” says biologist Scott Freeman of the University of Washington, Seattle. But many scholars have challenged the “sage on a stage” approach to teaching science, technology, engineering, and math (STEM) courses, arguing that engaging students with questions or group activities is more effective. To weigh the evidence, Freeman and a group of colleagues analyzed 225 studies of undergraduate STEM teaching methods. Freeman says he’s started using such techniques even in large classes.

Sleep and the Teenage Brain by Maria Popova How a seemingly simple change can have a profound effect on everything from academic performance to bullying. “Sleep is the greatest creative aphrodisiac,” Debbie Millman asserted in her advice on breaking through your creative block. “Sleep deprivation will profoundly affect your creativity, your productivity, and your decision-making,” Arianna Huffington cautioned graduating seniors in her Smith College commencement address on redefining success. In Dreamland: Adventures in the Strange Science of Sleep (public library) — the fascinating exploration of what happens while you sleep and how it affects your every waking moment, and also among the best science books of 2012 — David K. Biology’s cruel joke goes something like this: As a teenage body goes through puberty, its circadian rhythm essentially shifts three hours backward. The lack of sleep affects the teenage brain in similar ways to the adult brain, only more so. Public domain photographs via Flickr Commons

How to Develop Student Creativity undefined Copyright © 1996 by the Association for Supervision and Curriculum Development. All rights reserved. No part of this publication may be reproduced or transmitted in any form or by any means, electronic or mechanical, including photocopy, recording, or any information storage and retrieval system, without permission from ASCD. Introduction: Theory of Creativity "Alice is brilliant, but she doesn't have a drop of creative talent." How many times have we, as teachers, administrators, researchers, or parents, heard remarks like these? Buying Low and Selling High The investment theory of creativity (Sternberg and Lubart 1995) asserts that creative thinkers are like good investors: They buy low and sell high. Creative ideas are both novel and valuable. Evidence abounds that creative ideas are rejected (Sternberg and Lubart 1995). From the investment view, then, the creative person buys low by presenting a unique idea and attempts to convince other people of its value. 1. 2.

35 Psychological Tricks To Help You Learn Better - InformED : School of Education at Johns Hopkins University-The Relevance of Creativity in Education Maryland State Department of Education Council for Gifted and Talented This paper provides an overview of the stages and processes involved in creativity, how creativity is processed in the brain, the temperament and character traits present in highly creative individuals and how certain childhood experiences have an impact on the development of the creative potential. In addition, some tools and methods useful for the identification and the facilitation of the creative potential are described. Understanding, identifying, and nurturing creative potential is relevant in education and therefore should be taken into account when developing education programs, strategies, and policies to achieve quality education for all children. What is Creativity? The second stage, the elaboration involves all the subsequent conscious and voluntary work that is required to transform the associations developed in the previous stage into tangible works. How is Creativity Processed in the Brain? Chávez, R.

Scientific process skills education and scientific creativity The purpose of science education is to enable individuals to use scientific process skills; in other words, to be able to define the problems around them, to observe, to analyze, to hypothesize, to experiment, to conclude, to generalize, and to apply the information they have with the necessary skills. Scientific process skills (SPS) include skills that every individual could use in each step of his/her daily life by being scientifically literate and increasing the quality and standard of life by comprehending the nature of science. Therefore, these skills affect the personal, social, and global lifes of individuals. The SPS are a necessary tool to produce and use scientific information, to perform scientific research, and to solve problems. These skills can be gained by students through certain science education activities (Harlen, 1999; Huppert, Lomask & Lazarorcitz, 2002). Scientists use their creativity in every stage of scientific research (Abd-el Khalick & Lederman, 2000).