20 essential job interview tips. So your CV is good enough to get an interview and now you need some tips and strategies to seal the deal? 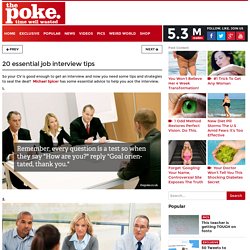 Michael Spicer has some essential advice to help you ace the interview. Trending: New And Exciting Products From The Daily Mail Gift Shop. Everyone Who Showed Up for Stefon's Wedding from TheMagicHour. 10 Odd Items From the New Girl Set, Explained. 14 Tips For Taking The Perfect Cat Selfie. The 25 Gayest Pictures Of The Pope. 10 Ways Drake Could Celebrate His Graduation. The Pope's Twitter Account Now Just Tracking Pope's Loneliness from Dan Abramson. The 32 Best New Memes Of 2012. 13 Things We’re Thankful For This Year. Despite hurricanes, earthquakes and every movie Taylor Kitsch made, 2012 has been a bounty of riches. 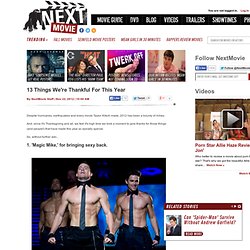 And, since it's Thanksgiving and all, we feel it's high time we took a moment to give thanks for those things (and people!) That have made this year so epically special. So, without further ado... 1. 'Magic Mike,' for bringing sexy back. 2. 3. 4. 5. 6. 7. 8. 9. 10. 11. 12. 13. 21 Greatest Unrequited High-Fives In Basketball History. The 25 Most Awkward Cat Sleeping Positions. Kuidas restoranid teid petavad? The Best Reactions to the Election from Look What I Found. Визитные карточки известных людей. Partying in the 1920's. «Эм и Джо» — Фотографии. «Места лишения свободы. Коля, 5,5 года: «Здесь дают каталог, в нем заказываешь что хочешь. 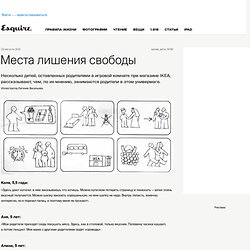 Можно кулачком потереть страницу и понюхать — запах очень вкусный получается. «Я вам римским языком говорю. …and answers. We are working with scientists across the University to answer some of the questions you are sending in. 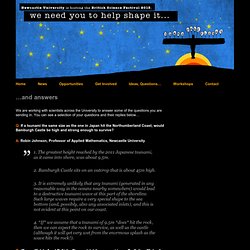 You can see a selection of your questions and their replies below… Q: If a tsunami the same size as the one in Japan hit the Northumberland Coast, would Bamburgh Castle be high and strong enough to survive? A: Robin Johnson, Professor of Applied Mathematics, Newcastle University 1. The greatest height reached by the 2011 Japanese tsunami, as it came into shore, was about 9.5m.2. Q: (Rowan Walsh, Aged 7) At the Diamond Jubilee we went to my Godfather, Michael’s. A: Colin Wilkinson, Corylus Learning, British Science Festival 2013 Young People’s Programme Coordinator Dear Rowan,Your question is a really interesting one, and needs quite a long answer. Robert Pattinson on The Daily Show. We all know what Robert Pattinson did and didn’t say on The Daily Show. 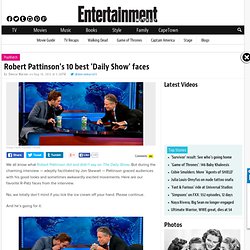 But during the charming interview — adeptly facilitated by Jon Stewart — Pattinson graced audiences with his good looks and sometimes awkwardly excited movements. Here are our favorite R-Patz faces from the interview. No, we totally don’t mind if you lick the ice cream off your hand. Please continue. And he’s going for it. Image Credit: Comedy Central Why so serious? 10 Reasons The Internet Loves Hillary Clinton from marymargaretmiller. The Flip Heard 'Round the World took place "...after she stepped off her official airplane June 17, 2012 at Los Cabos International Airport in San Jose del Cabo, Baja California, Mexico to attend the G-20 Summit. 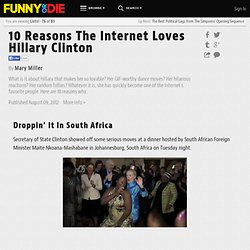 " Disney Same-Sex Series: Love Is The Answer. 32 Pictures You Need To See Before You Die. 2012 Olympic Swimming: 5 Juicy Questions for Ryan Lochte. Peter Yang 27, Olympic swimmer 1 When you see a woman you want to meet, you . . . 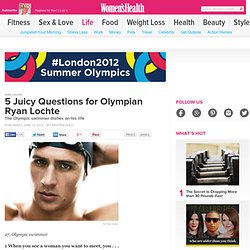 Make eye contact. This is Why You Always Log Out of Facebook from You're Doing It Right. And Other Deep Thoughts From The Olympian On Love And Romance. 5 Breaking Bad Spinoffs We’d Like to See from Brian Boone. GIFs of the Local Security Officers Sworn to Protect You from Small Town Security. When you close your eyes and picture those dedicating their lives to keeping your town safe, what comes to mind? 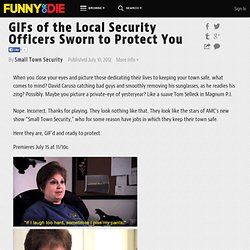 David Caruso catching bad guys and smoothly removing his sunglasses, as he readies his zing? Possibly. Maybe you picture a private-eye of yesteryear? The Best of the 90s Problems Meme from Memes! 11 Awesome Online Reviews from You're Doing It Right. Texts From Last Night » Cab Confessions. Cab Confessions We’ve all been there before — the window doesn’t roll down, there’s a mysterious stain on the cracked plastic seat, your “emergency $20″ is nowhere to be found but it appears that a friend has thrown up its equivalent in shots and you just hope to make it home…or to the next bar. 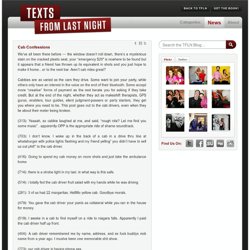 Aren’t cab rides great? Cabbies are as varied as the cars they drive. Some want to join your party, while others only have an interest in the voice on the end of their bluetooth. Some accept more “creative” forms of payment as the rest berate you for asking if they take credit. 9 Hilariously Distressing Letters From Kids from You're Doing It Right. Felixbondarev: я кстати очень... Dating Red Flags. The Best Ryan Gosling Moments of 2011: Ryan Gosling 2011: Celebrities. GodsLandGodsLaw: @JoeMyGod I never said bla... 13 Simple Steps To Get You Through A Rough Day.