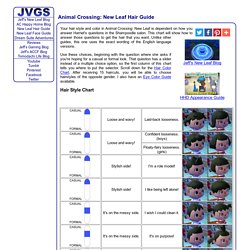 This chart will show how to answer those questions to get the hair that you want. Unlike other guides, this one uses the exact wording of the English language versions. Use these choices, beginning with the question where she asks if you're hoping for a casual or formal look. That question has a slider instead of a multiple choice option, so the first column of this chart tells you where to put the selector. Scroll down for the Hair Color Chart. Hair Style Chart Hair Color Chart For hair color, you have a choice of natural, intense, or bright colors. Game of Thrones (S03E07) - Osha tells Bran & Co. why she left the Wildling Lands.

It’s cool — we did too, and we’re not ashamed! Part of what was so awesome about this particular anime phenomenon is just how many awesome girls took part in the show, and the fact that they all had instead of just being the token females. These ladies literally schooled Ash and the gang on how it was done. We’ve rounded up our favorite pocket monster mamas for you to reminisce! Source: abckidsmannycenturions.wikia.com is always confident and always strives to do better than she did last time. Source: FanPop Dawn’s biggest rival, can be pretty annoying at times, but you have to admire her confidence and persistence — even if they sometimes come with a heaping side of denial.

Is confident and always happy to help anyone else. Source: Kirlia02.deviantart.com is a supermodel in addition to being a pretty tough Pokemon battler. Is both sensitive and spunky. 47 Mind-Blowing Psychological Facts You Should Know About Yourself. I’ve decided to start a series called 100 Things You Should Know about People.

As in: 100 things you should know if you are going to design an effective and persuasive website, web application or software application. Or maybe just 100 things that everyone should know about humans! The order that I’ll present these 100 things is going to be pretty random. So the fact that this first one is first doesn’t mean that’s it’s the most important.. just that it came to mind first. Modern Samurai UNBELIEVABLE SKILLS. with subtitles. I Like To Watch This After A Particularly Stressful Day. Danny Trejo.

See the Kids of ‘Heavyweights’ Then and Now. Before Judd Apatow was “Judd Apatow” he wrote a movie in 1995 called ‘Heavyweights,’ about the adventures of a group of portly young men who had been sent by their folks to a weight-loss camp. 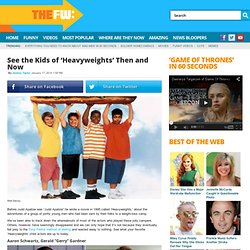 We’ve been able to track down the whereabouts of most of the actors who played these jolly campers. Others, however, have seemingly disappeared and we can only hope that it’s not because they eventually fell prey to the Tony Perkis method of dieting and wasted away to nothing. See what your favorite ‘Heavyweights’ child actors are up to today. Tupac Outtakes.

Heath Ledger talks about The Dark Knight (NEW) 22 Things You're Doing Wrong. 34 Facts About Scary Movies That Will Blow Your Mind. An Illustrated Guide To Conquering Social Anxiety. Every Picture Of Ryan Gosling And His Dog On The Internet.

JUNO - Bateman and Cera on the Birds and the Bees. Marshall Lee: The Missing Scene [fan-animation] 5 Insignificant Things That Determine if Someone Likes You. Anyone who has ever been unpopular, which we're thinking is approximately all of you, knows how unfair the system can seem -- it's all about looks and money and some indefinable coolness that some lucky bastards are just born with. 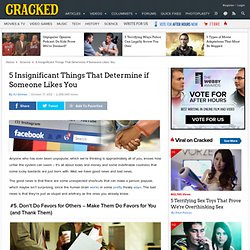 Well, we have good news and bad news. The good news is that there are some unexpected shortcuts that can make a person popular, which maybe isn't surprising, since the human brain works in some pretty freaky ways. The bad news is that they're just as stupid and arbitrary as the ones you already knew. #5.