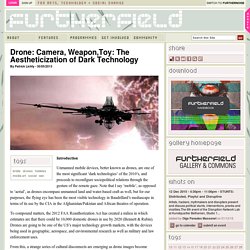 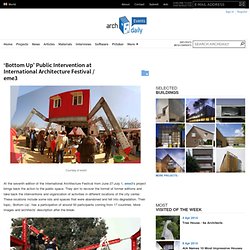 They aim to recover the format of former editions and take back the interventions and organization of activities in different locations of the city center. These locations include some lots and spaces that were abandoned and fell into degradation. Their topic, ‘Bottom Up’, has a participation of around 50 participants coming from 17 countries. Essay: On the smart city; Or, a 'manifesto' for smart citizens instead. On the smart city; A call for smart citizens instead Big data + social media = urban sustainability? 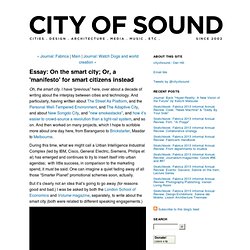 The promise of smart sustainable cities is predicated on the dynamics of social media alloyed to the Big Data generated by an urban infrastructure strewn with sensors. Feedback loops are supposed to engage citizens and enable behaviour change, just as real-time control systems tune infrastructure to become more energy efficient. Social media dynamics enable both self-organisation and efficient ecosystems, and reduce the need for traditional governance, and its associated costs. Eme3 2012: Bottom-up. Built Environment (1978-), Vol. 16, No. 4 (1990), pp. 288-303.

Hybrid Space Lab and Networked Participatory Design Systems. Coinciding with the rise of digital tools that foster participatory systems, Hybrid Space Lab is an entity that exists in the realm between architect and client, the traditional shapers of space. 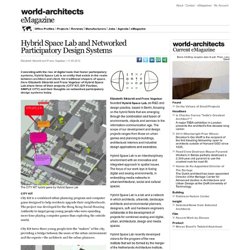 Teddy Cruz – What adaptive architecture can learn from Shantytowns. Teddy Cruz a California architecture, who has focussed on what architecture can be learnt from informal settlements is profiled in an article Border-town muse: An architect finds a model in Tijuana from the March 13 International Herald Tribune. 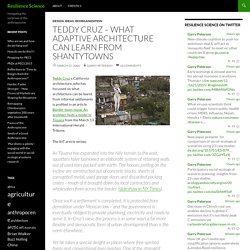 The IHT article writes: As Tijuana has expanded into the hilly terrain to the east, squatters have fashioned an elaborate system of retaining walls out of used tires packed with earth. The houses jostling on the incline are constructed out of concrete blocks, sheets of corrugated metal, used garage doors and discarded packing crates – much of it brought down by local contractors and wholesalers from across the border (slideshow in NY Times).

Once such a settlement is completed, it is protected from demolition under Mexican law – and the government is eventually obliged to provide plumbing, electricity and roads to serve it. ‎www.haque.co.uk/papers/hardsp-softsp-open-so-arch.PDF. Urban Versioning System 1.0.1 (super-mini-special) A design pattern for digital urbanism: City-Centre Enterprise Incubation. (The Custard Factory in Birmingham, at the heart of the city’s creative media sector in the central district of Digbeth) (In “Do we need a Pattern Language for Smarter Cities” I suggested that “design patterns“, a tool for capturing re-usable experience invented by the town-planner Christopher Alexander, might offer a useful way to organise our knowledge of successful approaches to “Smarter Cities”. 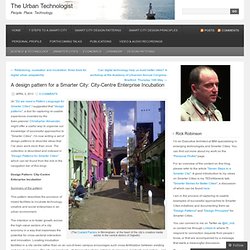 I’m now writing a set of design patterns to describe ideas that I’ve seen work more than once. The collection is described and indexed in “Design Patterns for Smarter Cities” which can be found from the link in the navigation bar of this blog). Design Pattern: City-Centre Enterprise Incubation Summary of the pattern: This pattern describes the provision of mixed facilities to incubate technology, creative and social enterprises in an urban environment.

City systems, communities and infrastructures affected: Ineffectiveness of surveillance cameras. Last update: 17 June 2009 We are told that surveillance cameras are "effective" crime-fighting tools because they deter and/or record evidence of criminal activity. 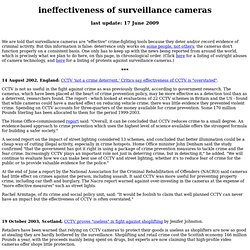 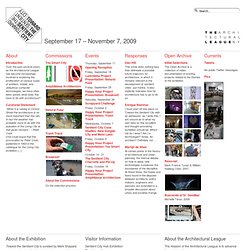 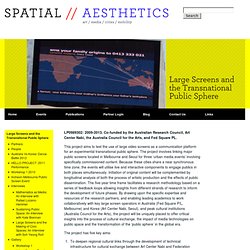 Co-funded by the Australian Research Council, Art Center Nabi, the Australia Council for the Arts, and Fed Square PL. This project aims to test the use of large video screens as a communication platform for an experimental transnational public sphere. The project involves linking major public screens located in Melbourne and Seoul for three ‘urban media events’ involving specifically commissioned content. Because these cities share a near synchronous time zone, the events will utilise live and interactive components to engage publics in both places simultaneously.