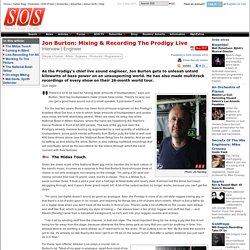 The Midas Touch Given the sheer scale of the National Bowl gig, not to mention the hi‑tech nature of the band's music, it comes as a surprise to find that Burton's front‑of‑house desk of choice is not only analogue, but verging on the vintage. "I'm sorry, but digital doesn't sound as good as analogue. "I do it all by sending stuff from the channel, in that dub style. Jon Burton's desk of choice is a Midas XL3. Coming In Blind. I'm looking to build a live sound toolbox, what are your suggestions for essential items? : livesound. 18 Ways to Reduce Feedback in Live Sound Engineering - Harvey Appleton - Freelance Sound Engineer. If you've ever engineered a band in a live situation or heard an engineer and feedback has ensued, you will know the horror. 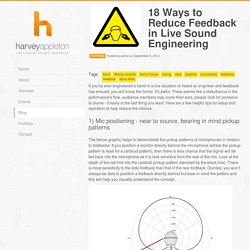 It's awful. There seems like a disturbance in the peformance's flow, audience members may cover their ears, people look for someone to blame - it really is the last thing you want. Here are a few helpful tips for setup and operation to help reduce the chance. 1) Mic positioning - near to source, bearing in mind pickup patterns The below graphic helps to demonstrate the pickup patterns of microphones in relation to foldbacks. Furthermore, if you can get the microphone as close as humanly possible to the source then you won't need to set the gain quite as high. 2) Check high levels A good idea is to make a mental note of troublesome mics or channels. Another point on this is to ensure that no attenuation is taking place on the way from the signal source to the desk - say a dodgy lead, or a knocked out of position mic or -40dB padded DI. 4) Harness the power of your EQ. Tune your system the way live pro sound people do for cheap [Archive]

When I read the title of this thread, I was filled with horror. 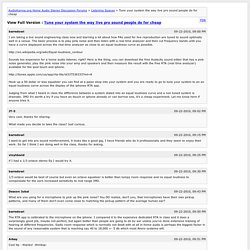 After reading through this entire thread, I am more horrified than I thought I would be. I have been tuning systems in movie theaters, dubbing stages, churches, and high end audio and home theaters for 20 years, and the way the original poster describes tuning a system for a room is not the way the pro's do it. First, EQ alone cannot do the job, it requires several acoustical tools.

EQ does great in the frequency domain, but fails miserably in the time domain. My practice is to always measure first, move seats or subs, measure again, add acoustical material, measure again, and the use EQ to tweak the final response. Tuning a system(you don't tune rooms) is not a cheap affair if it is done correctly.

There are several ways to measure a room, and it depends on whether you are measuring for a single place, or averaging for several places in the room. Back to Basics. It may not be obvious, but a P.A. system is a precision instrument. 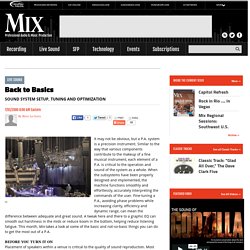 Similar to the way that various components contribute to the makeup of a fine musical instrument, each element of a P.A. is critical to the operation and sound of the system as a whole. When the subsystems have been properly designed and implemented, the machine functions smoothly and effortlessly, accurately interpreting the commands of the user. Fine-tuning a P.A., avoiding phase problems while increasing clarity, efficiency and dynamic range, can mean the difference between adequate and great sound. A tweak here and there to a graphic EQ can smooth out harshness in the mids or reduce boom in the bottom, helping reduce listening fatigue. This month, Mix takes a look at some of the basic and not-so-basic things you can do to get the most out of a P.A. BEFORE YOU TURN IT ONPlacement of speakers within a venue is critical to the quality of sound reproduction.