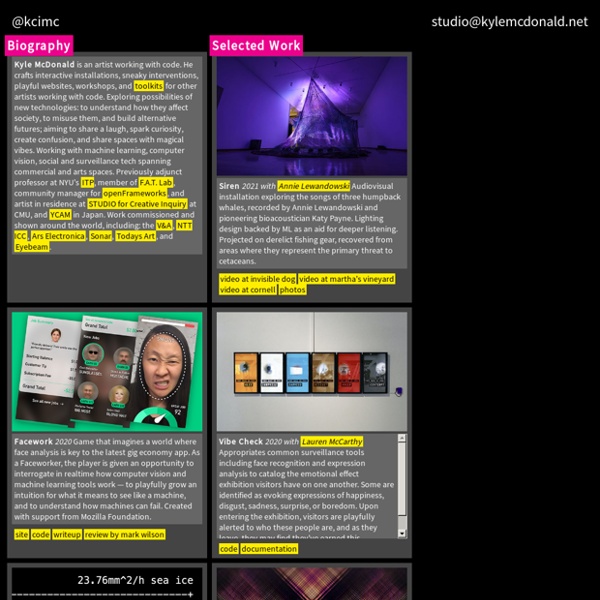 Bio Kyle McDonald is an artist who works in the open with code. He is a contributor to arts-engineering toolkits like openFrameworks, and spends a significant amount of time building tools that allow artists to use new algorithms in creative ways. His work is very process-oriented, and he has made a habit of sharing ideas and projects in public before they're completed. He enjoys creatively subverting networked communication and computation, exploring glitch and embedded biases, and extending these concepts to reversal of everything from personal identity to work habits.

Augmented Hand Series 2014 | Golan Levin, Chris Sugrue, and Kyle McDonald "It's a box. You put your hand in it. You see your hand with an extra finger." RF's DIY Modular Synth Pages Within an Analog Synth there is no digital storage of sounds, no memory, RAM, ROM or computer processing. Sounds are generated, processed and controlled by Analog circuitry. This synthesizer creates sounds through 'subtractive synthesis'. Jonathan Monaghan Escape Pod, 2015 After Fabergé, 2014 The Pavilion, 2014 $74 MK802 Android 4.0 Mini PC: First impressions (video) The MK802 is a tiny computer that fits in the palm of your hands. It looks like a slightly bulky USB flash drive, but it actually has a processor, RAM, storage, and I/O ports, which make it a Mini PC. Designed to run Google Android 4.0, the MK802 has a 1.5 GHz Allwinner A10 ARM Cortex-A8 processor, 512MB of RAM, and 4GB of storage.

scott gelber Anonymous: Has anyone purchased your jesus # christ pendant in steel or polished silver? I'd love to see how they turned out..No, you could be the first though ;)examples of those metals from the manufacturer:steelsilveror contact me for other metals Send Anything to the Edge of Space, for Free PongSats at the edge of space. Can’t afford that $200,000 to fly to space? The price is right on John Powell’s PongSat program. For just zero dollars, JP Aerospace will fly your science project — contained conveniently in a ping-pong ball — to the edge of space and back. Though the project is free for students, artists, engineers, and really, anyone interested in space exploration, it does cost money — somewhere around $14 per PongSat, according to Powell.

Modern art surrealism digital artist: poart prints, posters, wallpapers Pulp Surrealism: Insolent Popular Culture in Early Twentieth-Century Paris Book by; University of California Press, 2000 To date, most critical discussions of the origins of surrealism have focused upon the high-brow cultural realms of literature and art criticism. In L'Histoire du Surréalisme (1944), Maurice Nadeau, the first chronicler of the surrealist movement, established an elaborate literary and artistic genealogy of surrealism. 14 Guillaume Apollinaire, Max Jacob, and Jacques Vaché provided the poetic impulses toward surrealism; Charles Baudelaire, Alfred Jarry, Lautréamont (Isidor Ducasse), and Arthur Rimbaud were its “literary stimulators”; Giorgio de Chirico, Marcel Duchamp, and Francis Picabia were its inspirational artists. As an avant-garde movement, surrealism was the heir of cubism and Zurich dadaism. In the main, Nadeau provides a good point of departure. But it is a limited slice of cultural life.

My Space Balloon: Project Stratohab Success!! High School Student's Budget "We're making space more American. We're making space more democratic. We're making space more available, approachable and real to the average American." - James Muncy, President of Polispace As an avid maker and hobbyist, I support the open source initiative like the Arduino micro controller platform. When I decided to start this project 6 months ago, I dreamed of reaching space on a high school student's budget. A800 The Canon PowerShot A800 was released in January 2011. It is based on the Digic 3 platform and features the DryOS. Follow the latest development on the A800 porting thread Reviews and Specifications Edit

Panop Koonwat on Vimeo Panop Koonwat is a designer and animator who was born in Bangkok, Thailand in 1984. He received his BID degree in Industrial Design with advertising major and Advertising from Chulalongkorn University in Bangkok in 2008, and his MFA in Computer Art with a concentration in Motion Graphic and Animation from the School of Visual Arts in New York City in 2014. As an art director at the TBWA Thailand advertising agency from 2009-2011, Koonwat was responsible for the McDonald’s and Nissan accounts, among others.