The Subjunctive: A Quiz - Spanish Language. Verb Conjugation Table. Spanish Verb Mastery - Free Spanish Verb Charts. Conjugation of 'haber' in the present tense. One of the most common verbs in Spanish is haber. Haber has three main uses: As an auxiliary verb to form compound tenses: When used in this way, haber is the equivalent of the English auxiliary verb "to have" (which is much different than the English "to have" when it means "to possess").

Haber is used in a variety of tenses to form what are known as the perfect tenses because they refer to actions that have been or will be completed. As in English, the perfect tenses are formed by following a form of haber (it is conjugated irregularly) with a past participle. Examples: He comprado un coche. In English, it is very common to insert an adverb or other word between the two parts of a compound verb, such as in the sentence "he has always gone. " As a beginner, you don't need to learn all the tenses using haber now, but you should be able to recognize haber when it is used.

Two Verbs for 'To Know': 'Saber' and 'Conocer' - Learn Spanish Language. Irregular Verb Conjugation. Amusing Spanish Idioms. See also Spanish Slang, Spanish Words & Phrases An idiom is a phrase that is understood to have a meaning different from its literal meaning. 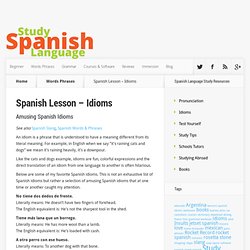 For example, in English when we say “it’s raining cats and dogs” we mean it’s raining heavily, it’s a downpour. Like the cats and dogs example, idioms are fun, colorful expressions and the direct translation of an idiom from one language to another is often hilarious. Below are some of my favorite Spanish idioms. This is not an exhaustive list of Spanish idioms but rather a selection of amusing Spanish idioms that at one time or another caught my attention. No tiene dos dedos de frente. Tiene más lana que un borrego. A otro perro con ese hueso. 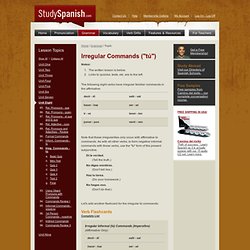 The following eight verbs have irregular familiar commands in the affirmative: Note that these irregularities only occur with affirmative tú commands. As with all other verbs, to form negative informal commands with these verbs, use the "tú" form of the present subjunctive. Di la verdad. (Tell the truth.) No digas mentiras. (Don't tell lies.) Command Quiz. Spanish II: Three Imperfect Irregular Verbs. Online Spanish Dictionary. Table. Better than a textbook (But a lot of site behind pay block)

Por and Para. Home / Grammar / Topic Notes: The written lesson is below.Links to quizzes, tests, etc. are to the left. 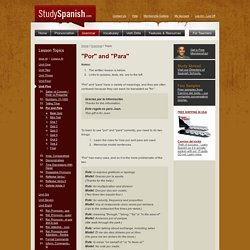 "Por" and "para" have a variety of meanings, and they are often confused because they can each be translated as "for. " Gracias por la información. Thanks for the information. To learn to use "por" and "para" correctly, you need to do two things: Learn the rules for how por and para are used.Memorize model sentences. "Por" has many uses, and so it is the more problematic of the two. Rule: to express gratitude or apologyModel: Gracias por la ayuda. "Por" also appears in many idiomatic expressions: "Para" -- in contrast, has relatively fewer uses. Rule: to indicate destinationModel: El hombre salió para Madrid. It is quite important to learn to use these two prepositions correctly, because if you inadvertently substitute one for the other, you might end up saying something altogether different from what you had intended.