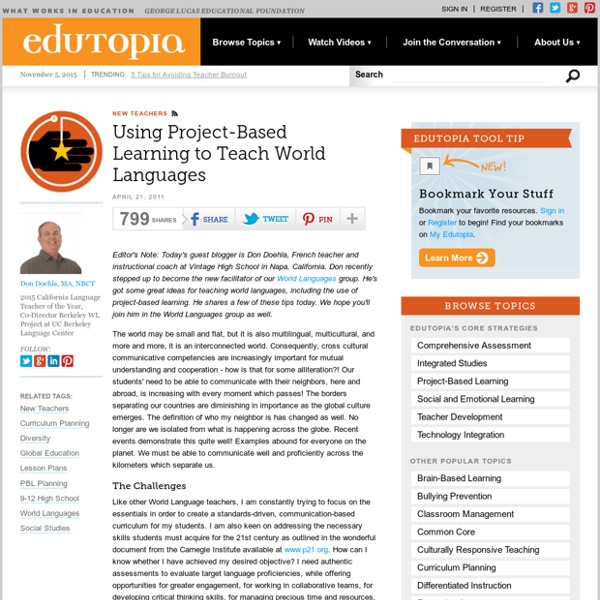 Editor's Note: Today's guest blogger is Don Doehla, French teacher and instructional coach at Vintage High School in Napa, California. Don recently stepped up to become the new facilitator of our World Languages group. He's got some great ideas for teaching world languages, including the use of project-based learning. The world may be small and flat, but it is also multilingual, multicultural, and more and more, it is an interconnected world. The Challenges Like other World Language teachers, I am constantly trying to focus on the essentials in order to create a standards-driven, communication-based curriculum for my students. The Rationale for PBL And so I come to project-based learning as a way of bringing it all together. Stage 1 Fluency Example: The Menu Project In this project, students play the role of a restaurant owner who needs to develop and create a menu for his/her restaurant established in one of the target language countries of the world. Future Plans

The Great World Language Debate du Jour: Grammar vs. Communication I am embarrassed -- no, actually I would go as far as to say horrified -- that I spent ten years of my career teaching students about the Spanish language. I actually felt proud when they could fill out grammar worksheets with precision. Now, you may be thinking that, as a Spanish teacher, this is my job, but since my enlightenment, I understand that it decidedly is not. I am now certain that teaching them to communicate well in the language is my job. Starting down this road can be wholly overwhelming. Here are some essential terms that I desperately wish I had known earlier. 1. These guidelines are important to consider when planning curriculum because they help you determine what students at certain levels can handle linguistically. DistinguishedSuperiorAdvancedIntermediateNovice Advanced, Intermediate, and Novice are further divided into High, Mid, and Low sub-stages. 2. 3. 4. Say goodbye to traditional quizzes and tests. 5 Steps for Planning Your Next Unit

10 Social Media Tips for Reaching World Language Learners Feeling outdated, not connected, or even totally lost in the digital age? Well, let me assure you, droning on and on about grammatical structures is a surefire way to quickly lose student interest in the world language classroom. Instead, embrace something which truly interests the millennial student: social media. Utilizing it in the classroom will give your students practical, engaging ways to communicate in the language you teach. The 21st century learner is not wired to memorize; instead, her or she is inclined to create, connect and collaborate. Here are ten ideas to get you started on your journey toward not becoming the classroom dinosaur you have always feared becoming. 1. Blogging is a wonderful way to keep your students connected, even when they are no longer in class. 2. Micro-blogging via Twitter is another way to link students outside of class. 3. Photo sharing a Spanish word of the day via Instagram has become an activity that my students truly enjoy. 4. 5. 6. 7. 8. 9.

Word Up: Bring the World's Languages to Your Classroom Here are four steps to adding that je ne sais quoi to your language lessons via free Internet resources. One of the biggest challenges for foreign language teachers is to expose their students to authentic speech by native speakers. Another is to immerse them in the culture of the language they're studying when that culture may be half a world away. "The Internet has made accessing authentic materials and interacting with native speakers an everyday occurrence in many schools across the country," reports Marty Abbott, director of education at the American Council on the Teaching of Foreign Languages (ACTFL). Keeping It Fresh To keep their classes fresh and current, teachers can incorporate material from foreign Web sites. Before the rapid expansion of the Internet, teachers hoarded ticket stubs, receipts, advertising flyers, and other tidbits from their own trips abroad with the goal of importing a language's culture to the classroom. No Passport Needed Global Group Learning

Global Language Education: Learning the Lingo A sampling of schools that take foreign language teaching to task. Learning a foreign language is no longer contingent on textbooks filled with stiff vocabulary exercises. Today, classes have context, from live connections with native speakers to project-based learning in which Skype, wikis, and a dozen other new technologies serve as powerful connecting tools. Highlighting Hindi More than 400 million people in the world speak Hindi, yet the language is rarely taught in any K–12 schools in the U.S. Supported by a three-year grant from the U.S. "Skype is a very exciting tool," says Neelam Mishra, a multilevel Hindi teacher at Edison High who helped launch the program in 2007. Once this program grows past the infancy stage, Mishra would like to see high-level collaborations take place between Americans and Indians, like a solutions-oriented project about global warming, which everyone finds relevant and which will offer an even greater incentive to work on language. Technology? Little Japan

Should We Give Up on Foreign Language Programs? Foreign language is on the chopping block in school districts around the country. So when Jay Mathews wrote a piece a few weeks ago about the foreign language study basically being a waste of time I was floored. Now is not the time to grease the rails for further cuts to language programs. But Mathews's question prompted me to raise another: Why not go whole hog on foreign language? In Mathews's defense, he too seems to believe in the whole hog approach, but for him it's all or nothing. Seattle's John Stanford International School (JSIS) shows us how well the whole hog approach can work. JSIS proves that immersion programs don't have to take time away from other academic work. Of course, such programs are about as rare as a migrant worker at a Sarah Palin meet and greet. I sympathize with Mathews, but I can't agree with him. In the end, I'm not sure we should give in to Mathews's all-or-nothing vision.

Three Ideas for 21st-Century Global Curriculum Now over a decade into the 21st century, there is tremendous pressure for education to "globalize." What this means exactly isn't universally agreed upon. In major world markets, the business world globalized decades ago, expanding beyond domestic markets in pursuit of more diverse audiences and stronger profits. And while major players in business continue to experiment and find their way in markets whose culture and buying practices diverge from those domestic, the "field" of education has been slow to follow suit. This is made all the stranger by the relationship between education and economic systems. So how do you "globalize" a curriculum? How about starting small, with manageable ideas? Idea 1: Adapt to the Learners More often than not, educators select the technology platforms and tools (and thus the domain) of learning, and force the students to use them rather than understanding the needs of learners first, and then finding the appropriate tech to support those needs. 1.

Re-thinking Reading Interventions Ever wonder why we teach kids with a one-size-fits-all anthology in the regular classroom, but are so careful to teach them at their “reading levels” when they are in a pull-out intervention program? Me too. In reading, students need the greatest amount of scaffolding and support when they are reading hard texts, and they need less support when reading easy materials. But we do the opposite. I’ve written before that research has not been supportive of the idea that we need to teach students at their “reading levels” (except for beginning readers). What if we turned the world on its head? 51 Tools in The Epic BYOD Toolchest and 100 BYOD Influencers to Follow Bring your Own Device (#byod) is a hot topic in education and one that many of us, including me, talk about often. It is challenge to bridge all the devices and teach. But, if you believe the SAMR model, BYOD can redefine your classroom (without killing your budget.) The Epic BYOD Toolchest on my Edutopia Blog includes 51 of the tools I used this past year in my BYOD classroom. Since I was just named one of the top 10 influencers on Twitter in BYOD by Onalytica. (#3 after Maribel Lopez @MaribelLopez and Tina Barseghian @MindShiftKQED of MindShift), you might find my 51 favorite tools for BYOD list over at Edutopia helpful as you look for apps to use with students. Read “The Epic BYOD Toolchest” on my Edutopia Blog Keeping Up with BYOD It can be a challenge to keep up with the rapidly changing best practices in BYOD. BYOD isn’t just one person, it is a movement. See the Top 100 BYOD Influencers at Onalytica Epic BYOD ToolChest with 51 BYOD Tools You Can Use Now

Why learning another language is worth the ‘mouth ache’ As Asia and Australia become more inter-connected through trade, business and immigration the exchange of cultures is often restricted by limited language understanding. Adelaide Language Festival director and linguistics professor Ghil'ad Zuckermann says Australia was once abundant with many languages and now has important reasons to be language conscious. “Out of 330 Aboriginal languages that were here pre-colonisation only 13 are alive and kicking, which means 4 per cent ... in other words 96 per cent were subject to what I call linguicide - language killing. “So Australia even ethically has a very important reason to lead language diversity and in fact language revival. “I think that Asian languages are of particular relevance to Australia firstly because there are so many Asians around and secondly because Australia is within this area, the Asia Pacific, and in fact it is good for Australia to have many fluent understanders and fluent speakers,” he says.