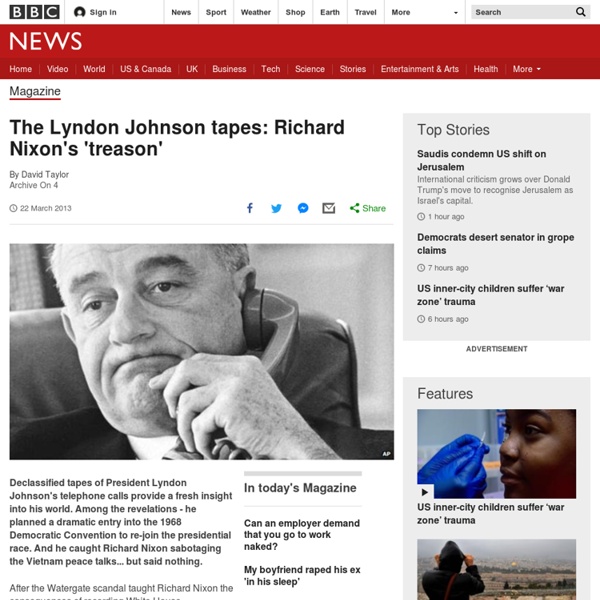 Declassified tapes of President Lyndon Johnson's telephone calls provide a fresh insight into his world. Among the revelations - he planned a dramatic entry into the 1968 Democratic Convention to re-join the presidential race. And he caught Richard Nixon sabotaging the Vietnam peace talks... but said nothing. After the Watergate scandal taught Richard Nixon the consequences of recording White House conversations none of his successors has dared to do it. He got the idea from his predecessor Lyndon Johnson, who felt there was an obligation to allow historians to eventually eavesdrop on his presidency. "They will provide history with the bark off," Johnson told his wife, Lady Bird. The final batch of tapes released by the LBJ library covers 1968, and allows us to hear Johnson's private conversations as his Democratic Party tore itself apart over the question of Vietnam. The 1968 convention, held in Chicago, was a complete shambles. Media playback is unsupported on your device Related:  Various Historical Items

'His Horse Was Named Death' - An FP Slideshow On Feb. 21, 2003, 1st Lt. Tim McLaughlin, a 25-year-old Marine platoon commander deployed to the Kuwaiti desert, wrote his initial entry in what would become a remarkable diary of the U.S. invasion of Iraq that spring. "The best writing advice I have been given is just to write," he began. "There will be plenty of time to edit and stylize it later." McLaughlin is a walk-on to history. His diary begins at the Pentagon on the morning of the 9/11 attacks, jumps to his deployment in Kuwait, follows him into battle during the invasion of Baghdad, and recounts the moment his own American flag was draped over the statue of Saddam Hussein in Firdos Square -- an iconic image of the U.S. invasion. Foreign Policy is pleased to present the Iraq War Diaries of Lt. Above: McLaughlin's operations journal from the war, with a quote from the Johnny Cash song "The Man Comes Around." See the entire Iraq War Diaries project, here.

Iraq: The Spies Who Fooled the World 17 March 2013Last updated at 20:43 ET By Peter Taylor BBC News The lies of two Iraqi spies were central to the claim - at the heart of the UK and US decision to go to war in Iraq - that Saddam Hussein had weapons of mass destruction. Six months before the invasion, the then Prime Minister Tony Blair warned the country about the threat posed by Saddam Hussein's weapons of mass destruction (WMD). "The programme is not shut down," he said. That same day, 24 September 2002, the government published its controversial dossier on the former Iraqi leader's WMD. The BBC has learned that two key pieces of intelligence, which could have prevented the Iraq war, were either dismissed or used selectively Designed for public consumption, it had a personal foreword by Mr Blair, who assured readers Saddam Hussein had continued to produce WMD "beyond doubt". But, while it was never mentioned in the dossier, there was doubt. Intelligence failure There was other intelligence, but it was less alarming.

The Shooter The man who shot and killed Osama bin Laden sat in a wicker chair in my backyard, wondering how he was going to feed his wife and kids or pay for their medical care. It was a mild spring day, April 2012, and our small group, including a few of his friends and family, was shielded from the sun by the patchwork shadows of maple trees. But the Shooter was sweating as he talked about his uncertain future, his plans to leave the Navy and SEAL Team 6. He stood up several times with an apologetic gripe about the heat, leaving a perspiration stain on the seat-back cushion. We would end up intimately familiar with each other's lives. In my yard, the Shooter told his story about joining the Navy at nineteen, after a girl broke his heart. "He said, 'Hey, we have snipers.' "I said, 'Seriously, dude. "That's the reason Al Qaeda has been decimated," he joked, "because she broke my fucking heart." Secrecy is a thick blanket over our Special Forces that inelegantly covers them, technically forever. 1.

4 Absurd GOP Efforts to Look "Inclusive" and "Tolerant" Totally Undermined by Their Policies March 18, 2013 | Like this article? Join our email list: Stay up to date with the latest headlines via email. On Monday, following its loss in the 2012 presidential election, the Republican National Committee (RNC) released an autopsy report that aims to “grow the Party and improve Republican campaigns.” And while the project seeks to position the GOP as a more caring and inclusive party, a closer examination of the report reveals a big disconnect between the principles and rhetoric the RNC espouses and the policies the party continues to advance: “[W]e do need to make sure young people do not see the Party as totally intolerant of alternative points of view. Republicans are spending millions of dollars defending the discriminatory Defense of Marriage Act (DOMA), generally oppose federal nondiscrimination laws to protect the LGBT community and marriage equality. “The Republican Party must be the champion of those who seek to climb the economic ladder of life. Rep.

The Zero Dark Thirty File Washington, DC, January 17, 2013 – The poster for the blockbuster movie Zero Dark Thirty features black lines of redaction over the title, which unintentionally illustrate the most accurate take-away from the film - that most of the official record of the hunt for Osama bin Laden is still shrouded in secrecy, according to the National Security Archive's ZD30 briefing book, posted today at www.nsarchive.org. The U.S. government's recalcitrance over releasing information directly to the public about the twenty-first century's most important intelligence search and military raid, and its decision instead to grant the film's producers exclusive and unprecedented access to classified information about the operation, means that for the time being – for bad or good – Hollywood has become the public's "account of record" for Operation Neptune Spear. Zero Dark Thirty 's screenwriter, Mark Boal, has claimed that the film is "a movie not a documentary" and should not be treated as history.

The 5 Worst Things About The House GOP’s New Budget File picture. US lawmakers geared up for a tough budget battle after Republicans agreed to a three-month increase to the US debt ceiling but made further extensions of the government's borrowing authority conditional on steep spending cuts. March 12, 2013 | Like this article? Join our email list: Stay up to date with the latest headlines via email. Rep. Here are the five worst things about Ryan’s budget: 1. 2. 3. 4. 5. Soviet Invasion of Afghanistan Was Not a Grand Design But a Grand Entanglement Resulting from Faulty Intelligence, Excessive Secrecy, and a Paralyzed Leadership, According to Conference of Former Decision-Makers Washington, D.C., December 21, 2012 – On December 12, 1979, the Soviet Politburo gathered to formally approve the decision made several days earlier to send a "limited contingent" of Soviet forces into Afghanistan. The secrecy was so tight that the leadership hand-wrote the authorization document in one copy and hand-carried it to each Politburo member for signature. The order does not even mention Afghanistan by name and uses cryptic language to entrust Andropov, Ustinov and Gromyko to oversee the implementation of the decision. The Yeltsin government declassified the one-page record in 1992 as part of a body of evidence for use at the upcoming trial of the Communist Party. Ever since December 1979, the war has continued to ravage the country, and scholars and politicians continue to try to come to grips with what went wrong at each stage.

Outrageous: David Cay Johnston Explains How Big Corporations Withhold Your Taxes and Then Pocket Them Photo Credit: Shutterstock.com March 22, 2013 | Like this article? Join our email list: Stay up to date with the latest headlines via email. Nobody has done more to expose the infinite ways in which the American economy is rigged to benefit those at the top than Pulitzer Prize-winning journalist David Cay Johnston. Last week, AlterNet caught up with Johnston by phone. Joshua Holland: David, for years you’ve reported how those who can afford the right accountants game this labyrinthian and opaque tax-code of ours. David Cay Johnston: I am actually heartened, Josh. Let me give you a stunning number I reported the other day. JH: That is remarkable. DCJ: My latest book, The Fine Print , looks at this in a different way. There are 6 million corporations in America, but 2,600 of them, a tiny number out of 6 million, own 80 percent of the business assets in America.