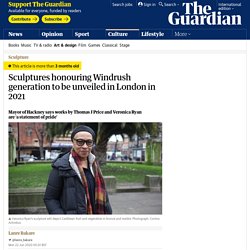 The artworks are being created by artists Thomas J Price and Veronica Ryan and will be installed in 2021. Their announcement coincides with Windrush Day on Monday, and with ongoing debate in the UK about contentious statues and their connections to colonialism and slavery. The mayor of Hackney, Philip Glanville, said new sculptures were a “real statement of pride” for the Windrushgeneration and their descendants in the borough. The London mayor, Sadiq Khan, recently announced a commission to review and improve diversity across London’s public spaces. “It’s not an answer to the statue conversation.

“It’s been so lacking, we just haven’t had it. After Windrush – Paulette Wilson's visit to Jamaica, 50 years on. Joint Council for the Welfare of Immigrants. Who are the Windrush generation? 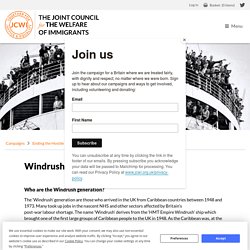 The ‘Windrush’ generation are those who arrived in the UK from Caribbean countries between 1948 and 1973. Many took up jobs in the nascent NHS and other sectors affected by Britain’s post-war labour shortage. The name ‘Windrush’ derives from the ‘HMT Empire Windrush’ ship which brought one of the first large groups of Caribbean people to the UK in 1948. The Windrush Generation Faces Deportation. Still, such assurances won’t necessarily convince those who remain skeptical of the U.K.’s strict immigration policies—ones May herself championed when she served as home secretary between 2010 and 2016. 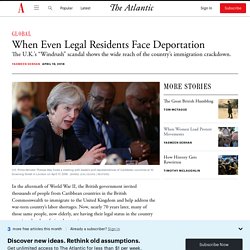 During that time, May sought to meet then-Prime Minister David Cameron’s goal of reducing net immigration to the tens of thousands by making the U.K. a “hostile environment” for illegal immigration. In practice, this meant requiring doctors, employers, landlords, and schools to confirm that those whom they served were in the country legally. “The determination was to go systematically through any interaction people might have with the state, short of putting checkpoints in the road, just to have people’s immigration status checked,” Polly Mackenzie, the director of cross-party think tank Demos and the former policy director to Deputy Prime Minister Nick Clegg, told me. 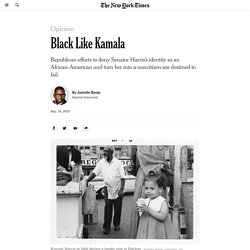 White and his family — his mother was said to be a descendant of President William Henry Harrison and Dilsia, an enslaved woman — had light-complexions, with few visible African features. “My skin is white, my eyes are blue, my hair is blond,” wrote White. They were, nonetheless, part of Atlanta’s Black community, tied to it by heritage and history. It was those ties that made them a target, and it was that experience of racial violence that impressed on White his own identity: “In the flickering light the mob swayed, paused, and began to flow toward us. Sculptures honouring Windrush generation to be unveiled in London in 2021. UK to deport academic to Democratic Republic of Congo – which she has never visited. Furaha Asani, a young academic at Leicester University, was shocked when her visa application was rejected in August. 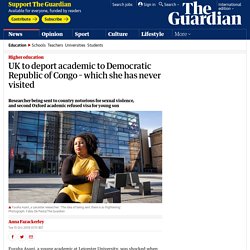 But real fear set in when she realised Britain plans to deport her in three weeks’ time to the Democratic Republic of Congo – a war-torn country she has never visited and where the Home Office agrees sexual violence is pervasive. Dr Asani came to the UK on a full scholarship to do a PhD on infection and immunity at Sheffield University, and has since been undertaking cardiovascular research at Leicester University. Her father was from the DRC, but fled in 1968 because as a student activist, his life was at risk. Uk-man-facing-deportation-hilary-ineomo-marcus-nigeria-london-a8647401. A former prisoner turned advocate for penal reform who has two British children is facing imminent removal from the UK in what campaigners have said highlights the government’s “robotic approach to detention and deportation”. 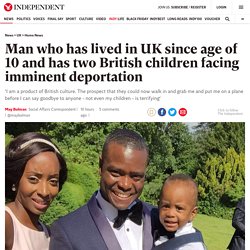 Hilary Ineomo-Marcus, 34, who arrived in the UK aged 10 and has lived in London ever since, was granted leave to remain in the early 2000s. But immigration officials revoked his status after he served a 15-month prison sentence in 2013 for a tax offence. During his time in prison, the Nigerian national worked as a presenter on National Prison Radio, where he was commended as being the "best prisoner-producer" to have worked on the station. Since his release, he has presented a number of programmes about prison and rehabilitation on national radio and volunteered for charities that seek to deter young people from offending. Windrush-scandal-shankea-stewart-jamaica-court-home-office-deport-a8641761. A Jamaican woman who has been in the UK since she was a child is facing removal from the country after losing a court battle to secure her immigration status. 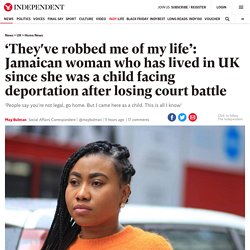 Shankea Stewart, whose grandfather was a member of the Windrush generation, said she felt her life had been “robbed”. A judge ruled that she should go back to Jamaica despite the fact her sick father and most other family members live in Britain. The Caribbean - History. Quiz QCM History. The Windrush Women Who Are Fighting For Their British Citizenship. Windrush generation: Who are they and why are they facing problems? Caribbean diplomats ask UK for more compassion for citizens. The Home Office must adopt a “more compassionate” approach towards retirement-age Commonwealth citizens facing deportation despite living in the UK all their adult lives, senior Caribbean diplomats have urged. 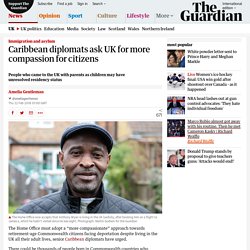 There could be thousands of people born in Commonwealth countries who emigrated to the UK with their parents as children and did not realise they were required to formally naturalise in Britain. Their unresolved residency status could mean they face problems accessing pensions, housing, healthcare and work, said Guy Hewitt, the Barbados high commissioner in London. New evidence of harsh treatment by the Home Office emerged this week when officials said they “now accepted” that Anthony Bryan, 60, who has spent five weeks in immigration detention centres, was in fact “lawfully present in the UK”. 'They were going to send me back to Jamaica. I’ve never been to Jamaica': Son of Windrush immigrant threatened with deportation. People deported to Jamaica from UK told to 'try to be Jamaican' The guide, published first in March 2013 and updated in November 2015, was widely criticized after resurfacing late Monday amid widespread condemnation of the government's treatment of the so-called Windrush generation, the first large group of Caribbean migrants to arrive in the UK after World War II. 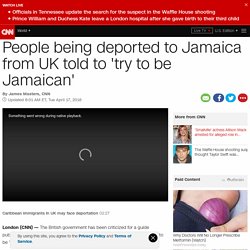 In one section of the guide, titled "Some do's and don'ts", people being deported from the UK are advised to: "Try to be 'Jamaican' -- use local accents and dialect (overseas accents can attract unwanted attention). " 22nd June 1948: MV Empire Windrush arrives at Tilbury Docks in London. The Windrush Generation: Why people invited to UK faced deportation.