National Windrush Day. I am British – Google Drive. Windrush Day 2019 message from Theresa May, Prime Minister - Black History 365. I am honoured that as one of my final acts of being Prime Minster of this great nation; is to support the first National Day Windrush Celebrations, which I announced last year backed by funding, and a Windrush Commemoration Committee to celebrate the contribution of the Windrush generation and their descendants We know that Britain today in the 21st Century is a diverse multi-ethnic democracy, and it is one that I’ve been immensely proud to lead. 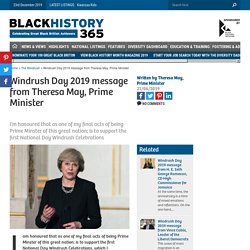 It is now 71 years since some of the first arrived in the UK aboard the Empire Windrush and we have a chance to celebrate the enormous contribution that people from around the Commonwealth – and their children and grandchildren – have made to Britain over seven decades. Our culture has been enriched and our society has been made stronger because of the people who travelled here to build new lives in the UK. Windrush service celebrates generation's contribution to Britain. Westminster Abbey filled with music, laughter and solemn reflection as 2,000 people gathered to celebrate the contribution of the Windrush generation and their descendants. 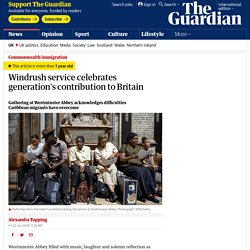 On Friday, 70 years after the MV Empire Windrush docked at Tilbury in Essex in 1948, carrying about 500 hopeful migrants, a service was held to recognise the contribution of the Windrush generation to British society – and acknowledge the difficulties they had overcome. Steel drums rang out the hymn Amazing Grace as guests entered, and a joyous rendition of Jesus, hold my hand by the Windrush 70th Anniversary Choir, had the congregation clapping along. Many Windrush settlers applied to job adverts with the hope of finding long-term employment in the UK, having gained a type of citizenship under the British Nationality Act of 1948, but faced racism, discrimination and distrust. The congregation heard original testimonies.

Some made them laugh (“Why is it so cold? “Settling down hasn’t been plain sailing,” he said. You Called and We Came: Remembering Nurses of the Windrush Generation - Black History 365. Contrary to popular belief the increased migration to England post war, was not solely the result of peoples from the Commonwealth countries (former British colonies) wishing to seek a better life for themselves: In the case of Nurses, midwives and other care staff, there was also an active invitation from the British government to come to England and help staff the newly formed National Health Service. 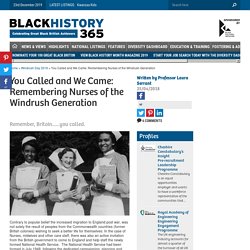 The National Health Service had been formed in July 1948, following the dedicated campaigning, planning and sheer hard work of Aneurin Bevan who envisioned a high quality health service for all citizens in Britain, free at the point of need. However, it became clear very quickly that in the aftermath of WW2, there was a shortage of qualified health care staff to fulfil the ever increasing demands for this neophyte national health service – The answer? How the Windrush Generation transformed British arts and culture - BBC Bitesize. How Caribbean migrants helped to rebuild Britain. After World War Two, Britain was a country short of workers and needed to rebuild its weakened economy. 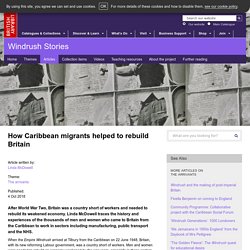 Linda McDowell traces the history and experiences of the thousands of men and women who came to Britain from the Caribbean to work in sectors including manufacturing, public transport and the NHS. When the Empire Windrush arrived at Tilbury from the Caribbean on 22 June 1948, Britain, with its new reforming Labour government, was a country short of workers. Men and women were needed to rebuild an economy weakened by the war years, especially in those sectors ocrucial to the reconstruction programme.

These included the production of raw materials such as iron, steel and coal, as well as food. There was also a huge backlog of essential maintenance and repair work and severe shortages in the construction sector. How did the Empire Windrush change London? The number of people living in Britain who were born in the West Indies grew from about 15,000 in 1951 to 172,000 in 1961. 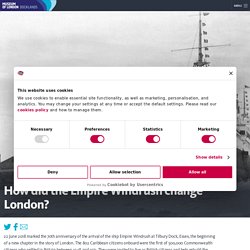 Due to a perceived “heavy influx of immigrants”, the British government created the Commonwealth Immigrants Act 1962, barring the future right of entry previously enjoyed by citizens of the Commonwealth, which many considered a direct bar on people of colour. Racism rooted in fear and mistrust erupted into violence in Notting Hill in 1958, when gangs of Teddy Boys roamed the streets attacking Black men (and murdering one, Kelso Cochrane from Antigua.) A Caribbean Carnival was held to try and improve race relations in 1959, later becoming the Notting Hill Carnival. Windrush memorial to be built at Waterloo station. Image copyright PA. 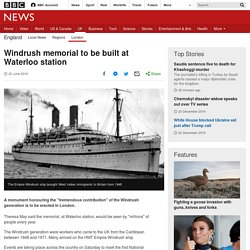 May’s plan for Windrush memorial at Waterloo met with ‘disgust’ A memorial to the Windrush generation at Waterloo station in London is being “imposed” by the government to the “disgust” of the Caribbean community, the Windrush Foundation has said. 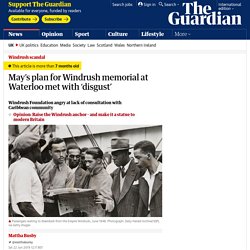 Announcing the plan for the permanent monument on Saturday, Theresa May said it would be a lasting legacy to the “tremendous contribution” of the Windrush generation as events were due to take place for the first Windrush Day to mark 71 years since arrival of HMT Empire Windrush. However, Arthur Torrington, the chair of the Windrush Foundation, said the government was behaving “arrogantly” and “treating the Caribbean community like children” by not consulting with key groups, while he noted just 13 Windrush victims have so far been granted emergency support by the government. “Its like imposing a monument on your behalf where you don’t want it and saying this is what you should have,” Torrington said.

“You can’t just bully a community and say, ‘Here is a monument’. “Windrush is about 1948,” he said. The Caribbean Immigrants Who Transformed Britain. Bear in mind that, at that time, the word “immigration” didn’t have quite the same meaning, or didn’t carry the same weight. 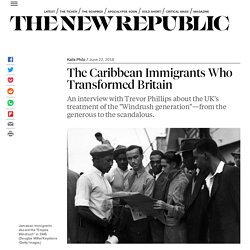 All of these people carried British passports because they were members of the British empire. There was no distinction between a British person born in Bombay, or Georgetown, or Leeds. They had exactly the same thing, and that was how people thought of it. Secondly, there were no immigration formalities. If you look at the pictures of people coming down the gangway and walking onto the dock, there are no immigration officials there demanding passports. Windrush, race riots and Europe's biggest street party: Notting Hill 1958 vs Notting Hill 2018. Windrush Day 2019: What's it all about? - CBBC Newsround. To enjoy the CBBC Newsround website at its best you will need to have JavaScript turned on. 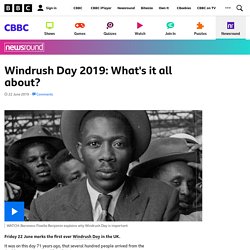 The Official Windrush Day Magazine 2019 by Sugar Media and Marketing. On national Windrush day, this is the history of British immigration policy and how we can change it. “Good race relations require tough immigration policies” is a crude but apt summary of the post-war political consensus on race and immigration in Britain. 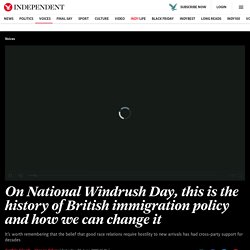 Theresa May’s time in office, first as home secretary and then prime minister, has seen this consensus tested to its very limits. For almost a decade, her often-repeated commitment to address the “burning injustice” of racial discrimination has sat awkwardly alongside her unfiltered hostility towards migrants and their families. As May prepares to leaves office, it’s time to also retire the belief that there can ever be such a tidy distinction between tackling racism and building fair and just policies on race, migration and citizenship. This Windrush Day, hope now seems like a thing of the past. Tilbury, June 1948. I know this story so well. Pathé newsreel footage shows black men and women dressed in their Sunday best (though it was a misty Tuesday morning), elegantly disembarking the SS Empire Windrush after 22 days at sea. Politics & Calypso: Lord Kitchener, the Windrush-era musician who sang stories. “London is the place for me”, sang Lord Kitchener as he was interviewed by Pathé News on the steps of the Windrush.

The song he wrote during the four-week voyage to his new home echoes the optimism that many expats had on arrival. They would arrive in London, their ‘Mother Country’, work, live for a few years and go back to the Caribbean. Unfortunately for many, they were often confronted with poor employment opportunities and deep-seated xenophobia, epitomised by the infamous ‘No Blacks, No Dogs, No Irish’ signs that welcomed them. Despite these obstacles, Lord Kitchener was able to record at Abbey Road studios in early 1950, thanks to a man named Denis Preston who saw the potential for calypso in the UK record market.

However, the man affectionately named Kitch used Denis’ platform not only to produce commercially viable music, but songs which told stories of racism, hope, self-reflection, and confusion. (21) Windrush - Episode 01 - Arrival. Lord Kitchener - If You're Not White You're Black. (21) Lord Kitchener If You're Brown. (21) Britain’s Windrush veterans: the battle to be British. A speech by HRH The Prince of Wales at the S.S. Empire Windrush Reception, St James's Palace State Apartments. I created my Prince's Trust to help disadvantaged young people regardless of colour, but ethnic minorities are one of its priorities. Ladies and Gentlemen, I would like to welcome you all. First of all, I have to say I had little idea of what the name Windrush signified when the Foundation first made contact.

But I was not - quite - born when the S.S. Empire Windrush docked at Tilbury 50 years ago this month. So preparing for this afternoon has been an education. Empire Windrush Unit. The idea of this unit stems from a text given for the Baccalaureat on June 2004, extracted from "And Justice There Was None" by Deborah Crombie, 2002. Along with the study of this text, I created a few activities to help the students understand the circumstances of the arrival of the newcomers, and the difficulties they might have faced to settle in their new neighbourhood. It was particularly important for me to go further as I teach in the Caribbean island of Martinique which is located between two islands of the British Commonwealth, namely St Lucia and Dominica. This was therefore a great opportunity for me to teach my students about the history of their region. Windrush Stories creative writing activities (primary students)

The Windrush shaped Britain. Why not recognise that? Back in 2010 I wrote an article arguing that we would have failed as a nation if, by 2018, there was still no substantive recognition for the Windrush generation on the 70th anniversary of their arrival in Britain.

Empire Day. Séquences. The Unwanted: The Secret Windrush Files review – who could feel proud of Britain after this? History - British History in depth: Black British Literature since Windrush. Who are the Windrush generation? Windrush-era citizens row: timeline of key events. My Caribbean trip opened my eyes to the legacy of the British empire. London is open and always has been.