Multiculturalism in the UK 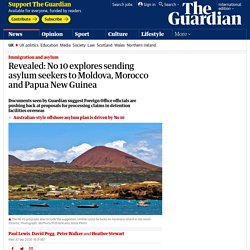 The documents suggest officials in the Foreign Office have been pushing back against No 10’s proposals to process asylum applications in detention facilities overseas, which have also included the suggestion the centres could be constructed on the south Atlantic islands of Ascension and St Helena. The documents, marked “official” and “sensitive” and produced earlier this month, summarise advice from officials at the Foreign Office, which was asked by Downing Street to “offer advice on possible options for negotiating an offshore asylum processing facility similar to the Australian model in Papua New Guinea and Nauru”. 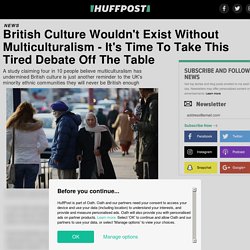 Oath and our partners need your consent to access your device and use your data (including location) to understand your interests, and provide and measure personalised ads. Oath will also provide you with personalised ads on partner products. Learn more. To give you a better overall experience, we want to provide relevant ads that are more useful to you. For example, when you search for a film, we use your search information and location to show the most relevant cinemas near you. Learn more about how Oath collects and uses data and how our partners collect and use data. Select 'OK' to continue and allow Oath and our partners to use your data, or select 'Manage options' to view your choices.

The Guardian view on multicultural Britain: learning to live together. It is depressing to discover that four in 10 adults in this country agreed with the statement that “having a wide variety of backgrounds and cultures has undermined British culture”. 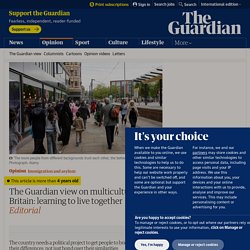 After all, such mainstays of British culture as curry, the Notting Hill carnival and bearded Muslim sports heroes were at one time all viewed as inimical to it. Cultures are dynamic things, developing organically from communities. They do not exist in isolation or remain static. Having a range of cultures in Britain is normal, not novel. If so, then why are so many still resistant? The thinktank British Future, which commissioned the poll and produced an in-depth study looking at immigration and integration, should be congratulated for engaging the public in a debate about their views and concerns on these subjects. Identity is a fact about us, but it should not define the horizon of our possibilities. Four in 10 think British culture is undermined by multiculturalism. A large minority of people in the UK believe multiculturalism has undermined British culture and that migrants do not properly integrate, according to some of the broadest research into the population’s attitudes to immigration. 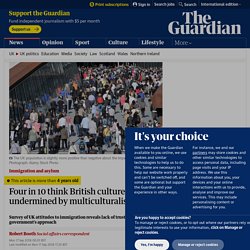 The study, conducted over the last two years, also reflects widespread frustration at the government’s handling of immigration, with only 15% of respondents feeling ministers have managed it competently and fairly. On balance, the UK population appears to be slightly more positive than negative about the impact of immigration; however, 40% of respondents agreed that having a wide variety of backgrounds has undermined British culture. More than a quarter of people believe MPs never tell the truth about immigration and half the population wants to see a reduction in the numbers of low-skilled workers coming into Britain from the EU. “Immigration is a national issue, but people see it through a local lens,” said the report’s co-author Rosie Carter of Hope Not Hate. Multiculturalism: What does it mean?

Pundits have been reacting to a speech by David Cameron in which the prime minister argued multiculturalism had "failed". 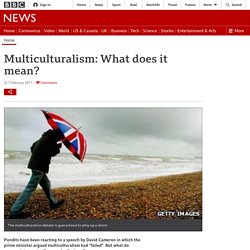 But what do commentators actually mean by the term? It is one of the most emotive and sensitive subjects in British politics. But at times it seems there are as many definitions of multiculturalism as there are columnists, experts and intellectuals prepared to weigh into the debate. The subject has become the focus of renewed scrutiny in the wake of a speech by prime minister David Cameron, in which he told a security conference in Germany that the UK needed a stronger national identity to prevent extremism. In his speech, which has provoked a political storm, Mr Cameron defines "the doctrine of state multiculturalism" as a strategy which has "encouraged different cultures to live separate lives, apart from each other and apart from the mainstream".

This characterisation is not new.